WORLD US coronavirus cases may reach 3m by July: research

US coronavirus cases may reach 3m by July: research 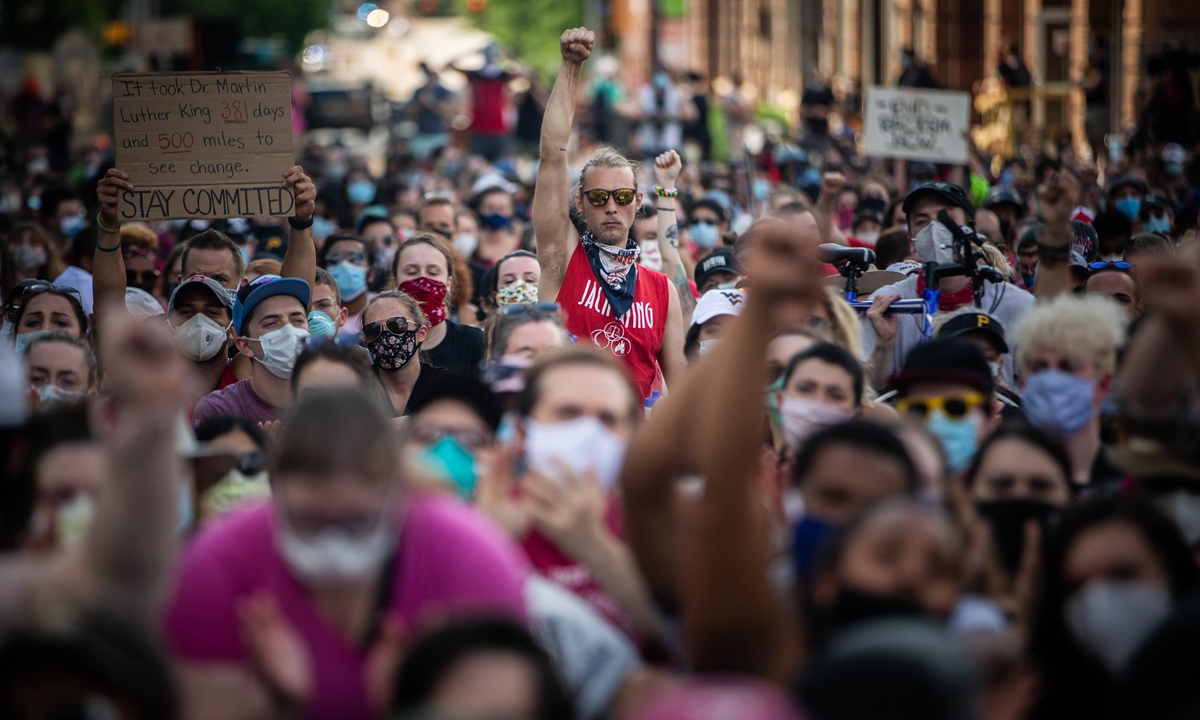 Protesters raise their fists during a demonstration against racism and police brutality in Pittsburgh, Pennsylvania, the US on Saturday. (Photo: AFP)

After becoming the only country to have hit the 1 million mark in confirmed coronavirus cases, the US now has seen that number double. However, a greater pain is yet to come, according to Chinese analysts who believe that with the continuing large-scale domestic protests and presidential campaign to be resumed next week, the US is likely to see the number surpassing 3 million in about a month and will not be free of new cases by the end of the year.

The US surpassed the grim milestone of 2 million confirmed COVID-19 cases late Wednesday. It recorded 112,908 deaths, according to Johns Hopkins University, exceeding the combined total of countries ranking second and third.

US coronavirus cases will continue to soar, and it's only a matter of time before the number hits 3 million. For US President Donald Trump, the massive protests have a far more important impact on his administration and presidential campaign than the coronavirus pandemic, Zeng Guang, chief epidemiologist of the Chinese Center for Disease Control and Prevention, told the Global Times on Thursday.

Liang Manchun, an associate research fellow at the Institute for Public Safety Research of Tsinghua University, predicts the US will hit 3 million cases in a month's time.

A global coronavirus prediction model established by the institute shows that the increase of daily new coronavirus cases in the US has reversed the downward trend in June due to the nationwide protests, Liang told the Global Times.

Based on the current trend, Liang predicts that the number of US cases may reach 2.5 million by the end of June and 3 million in four weeks.

The US reached its first million confirmed cases in 14 weeks, but six weeks later, it reached 2 million. The US had 1,264 cases when it declared a national emergency on March 13, and the number surpassed 100,000 in two weeks.

"We previously predicted that the US may be free of new cases in September, but now it seems that the US will not be free from new virus cases even by the end of the year. And at that time, the number of cases is likely to surpass 5 million," Liang said.

Zeng said the soaring number of cases in the US is a result of the country's chaotic situation and the Trump administration's political maneuvering.

Apart from the delayed response in the early stages, the Trump administration allowed work and life to resume in many states to help his presidential campaign when the coronavirus was still at an extremely dangerous level, and the massive protests have accelerated the spread of the virus, Zeng said.

At this critical moment, Trump only cares about his political interests, as he said he will resume his campaign rallies next week in a bid to rebound from a drop in opinion polls ahead of November's election.

Internationally, the Trump administration, including Trump and Secretary of State Mike Pompeo, has relentlessly sought to put the blame on China for the pandemic.

A comparison of China and the US on the timelines of their response to COVID-19 showed that when Wuhan was put under lockdown on January 23, the US had only one confirmed case, and when the lockdown in Wuhan was lifted on April 8, there were 400,000 confirmed cases in the US.

On the day that the US coronavirus tally hit 2 million, the US State Department released its 2019 report on international religious freedom, in which it claims the state of religious freedom in China has further deteriorated.

Pompeo said at a press conference that China's "state-sponsored repression against all religions continues to intensify," but on the killing of George Floyd that triggered massive nationwide protests, he said the US is "so special" and it's the greatest nation in the history of civilization.

Chinese netizens, who have been calling the US "No.1 in the global coronavirus marathon," ridiculed Trump on Thursday, saying, "It's surely still under Trump's control."

Some quoted Pompeo, saying, "Yes, the US is indeed a special nation, and it deserves to be the world leader."

No matter how hard US politicians try to shift the blame to China to divert people's attention from their incompetence in response to the coronavirus, those groundless accusations cannot hide the fact that the dereliction of duty of the current US administration has resulted in one of the country's biggest domestic disasters, and the responsibility is too heavy for US politicians to shake off, Chinese analysts said. 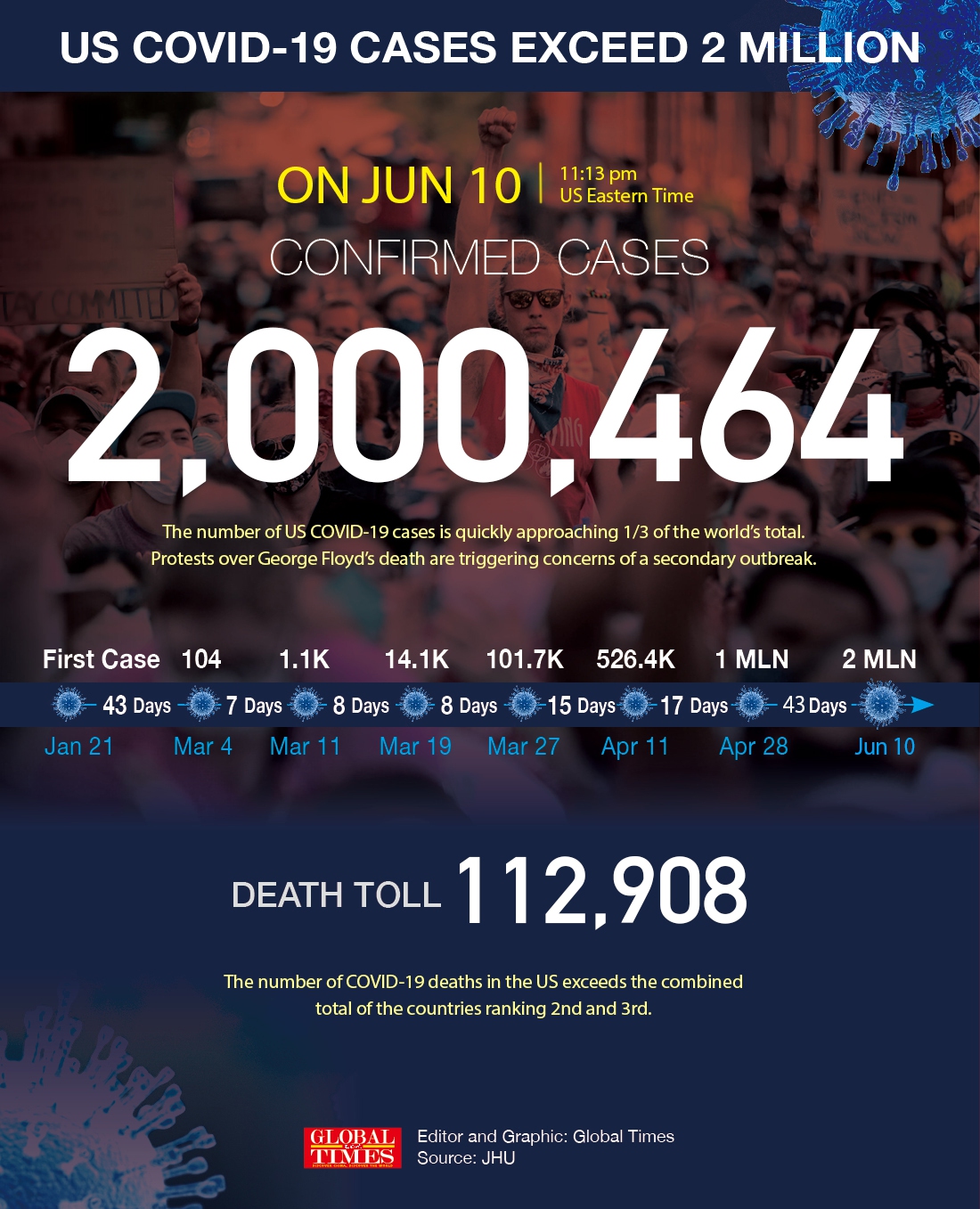