US coronavirus deaths climb to 9 as virus continues to spread

The coronavirus death toll in the US now stands at nine. The newly reported death cases are two people who died in the Seattle area last week and have since been found to have had the coronavirus, the health department in King County, Washington, announced Tuesday. 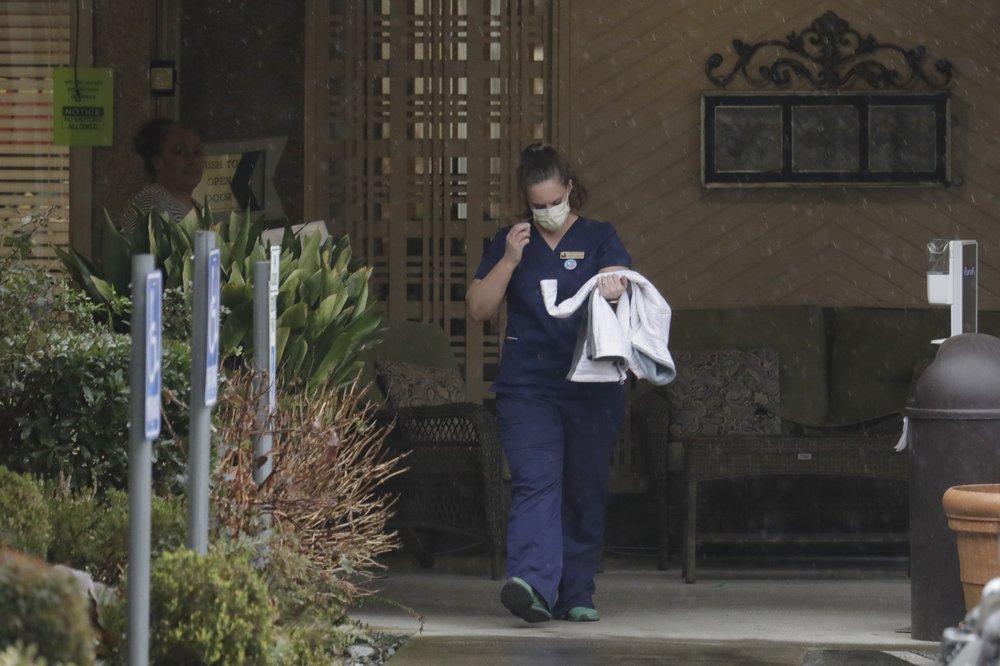 A worker at the Life Care Center in Kirkland, Wash., near Seattle, wears a mask as she leaves the building, Monday, March 2, 2020. (Photo: AP)

Both were residents of Life Care Center in Kirkland, which is linked to several previous cases and deaths. The posthumous diagnoses mean the pair were likely the first in the US to die from the disease. They died on Feb. 26.

King County has 21 cases, including eight deaths, and neighboring Snohomish County has six cases, with one death, according to the Washington state health department.

The Life Care Center, a skilled nursing care facility located in the northeast of Seattle, has become the center of a coronavirus outbreak. At least five deaths in the US have been traced back to Life Care, according to Washington state and local health officials.

Over 50 people among the facility’s 108 residents and 180 staff were being monitored for signs of the illness, officials said over the weekend. Meantime, 27 firefighters and two police officers in Kirkland are in quarantine, city spokeswoman Kellie Stickney said.

In addition, the first presumptive case of the coronavirus in North Carolina is linked to this same facility in Kirkland. The resident traveled from Washington state after visiting the nursing facility there, state officials said in a news conference on Tuesday.

Washington Governor Jay Inslee declared a state of emergency Saturday, directing state agencies to use all resources necessary to respond to the outbreak. Dozens of schools in Western Washington are closed Tuesday due to confirmed or potential coronavirus cases.

The coronavirus might have been circulating undetected and has possibly infected scores of people over the past six weeks in Washington state, according to a genetic analysis of virus samples, the Washington Post reported.

“This strongly suggests that there has been cryptic transmission in Washington State for the past 6 weeks,” Trevor Bedford, a computational biologist at Fred Hutchinson Cancer Research Center in Seattle who announced the results of the research on Twitter late Saturday night. “I believe we’re facing an already substantial outbreak in Washington State that was not detected until now due to a narrow case definition requiring direct travel to China.”

As of Tuesday afternoon, there were 118 cases of the novel coronavirus in the US, according to the US Centers for Disease Control and Prevention, as well as state and local governments. Among them, 48 cases are from repatriated citizens and 70 cases were detected through US public health system in 13 states.

Community spread of the novel coronavirus is occurring in parts of the US, including Washington, Oregon and California, CDC said. Health officials across the nation said they expect those numbers to continue to rise in the wake of the decision of the CDC last week to widen testing guidelines.

"What is happening now in the United States may be the beginning of what is happening abroad,” Dr. Nancy Messonnier, director of CDC's National Center for Immunization and Respiratory Diseases, told reporters Tuesday.

While containment efforts focus on identifying and isolating cases of the novel coronavirus, Messonnier warned that mitigation efforts may be coming.

“As more areas see community spread, local communities may start employing tools that encourage social distancing,” she said. “The goal of social distancing is to limit exposure by reducing face-to-face contact and preventing spread among people in community settings.”

Because of coronavirus concerns, Google canceled its annual developer conference. Facebook canceled two conferences in recent weeks, including its biggest annual event, F8. Twitter told all of its staffers this week to work from home if possible.

While President Trump urged pharmaceutical companies to speed up on vaccine developing, Dr. Anthony Fauci, the head of the National Institute of Allergy and Infectious Diseases, said the process to get a potential coronavirus vaccine is expected to take a year to a year and a half.

At this moment, many Americans are concerned whether they can get tested in time when they have symptoms as a result of federal government’s slow release of testing kits. Also, people are worried about medical bills of relevant treatment.