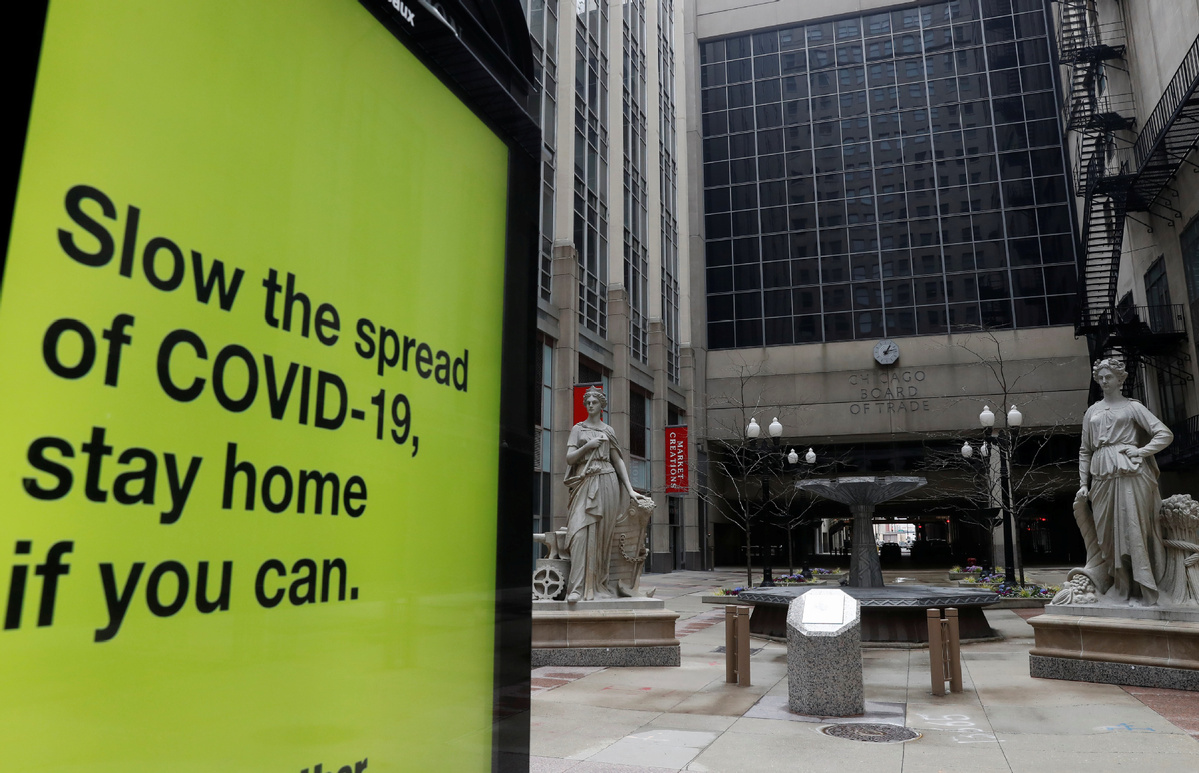 A sign warning of the spread of the coronavirus disease (COVID-19) is seen in front of the closed Chicago Board of Trade in Chicago, Illinois, US, April 23, 2020. (Photo: Agencies)

WASHINGTON, April 25 (Xinhua) -- More than 900,000 people were infected with the novel coronavirus (COVID-19) as of Saturday in the United States, with the death toll exceeding 52,000, while a new study indicated that the virus was likely to be spreading in multiple U.S. cities "far earlier" than Americans knew.

The number of COVID-19 cases in the country reached 905,364 as of 10:30 a.m. (1430 GMT), and a total of 52,042 deaths related to the disease were recorded, according to the Center for Systems Science and Engineering (CSSE) at Johns Hopkins University.

Worldwide, more than 200,000 people died of the disease as of Saturday, among over 2.8 million cases, showed the CSSE data.

The U.S. states and federal government are trying very hard to balance the public health risk posed by the virus with the severe cost of month-odd shutting down of the country's economy.

The Congressional Budget Office said Friday that the unemployment rate around the country, which was near a 50-year low before the coronavirus struck, will surge to 16 percent by September as the economy withers under the impact of the outbreak.

More than 26 million Americans have applied for unemployment benefits since March.

White House unveiled on April 16 three-phase guidelines for reopening the U.S. economy, putting the onus on governors of making decisions about their states' economies.

Over a dozen states, including Georgia, Oklahoma, Tennessee, Mississippi, Texas, Colorado and Iowa, are moving toward restarting their economies this weekend with some restrictions.

Several states have announced plans to coordinate their response with neighbors. California is moving forward in coordination with Washington and Oregon while governors from New York, New Jersey, Connecticut, Delaware and Rhode Island announced plans to form a joint task force.

A CBS News poll published Thursday said that 70 percent of respondents believed the country's top priority should be trying to "slow the spread of coronavirus by keeping people home and social distancing, even if the economy is hurt in the short term."

The virus was likely to be spreading in multiple U.S. cities "far earlier" than Americans knew, according to a new research.

"Even in early February -- while the world focused on China -- the virus was not only likely to be spreading in multiple American cities, but also seeding blooms of infection elsewhere in the United States, the researchers found," said a report by The New York Times on Thursday.

In the five major U.S. cities -- New York City, Boston, San Francisco, Chicago and Seattle, as of March 1, there were only 23 confirmed cases of the coronavirus.

However, according to a model of the spread of the disease by researchers at Northeastern University, "there could have actually been about 28,000 infections in those cities by then," the report said.

The virus spread on the West Coast of the United States weeks earlier than initially believed, according to new information released by Santa Clara county, California on Tuesday.

Jeffrey V. Smith, Santa Clara county executive, told Xinhua in an email interview that "so far, this is the earliest death in the United States."

Dowd and another 69-year-old man who died at home on Feb. 17 had no "significant travel history," and they presumably caught the virus through community spread, said the county's public health officer Dr. Sara Cody.

"These patients apparently contracted the illness from community spread. This suggests that the virus was circulating in the Bay Area in January at least, probably earlier," Smith told Xinhua.

Previously, the first known U.S. death from the virus was on Feb. 29 in Kirkland in Washington state.