WORLD US COVID-19 deaths almost double in 2 weeks, as fight over ban of school mask mandate goes on

US COVID-19 deaths almost double in 2 weeks, as fight over ban of school mask mandate goes on

NEW YORK, Aug. 14 (Xinhua) -- The seven-day average of COVID-19 deaths reached 645 in the United States on Friday, almost doubling in two weeks to reach the highest point since May, according to data compiled by the Johns Hopkins University. 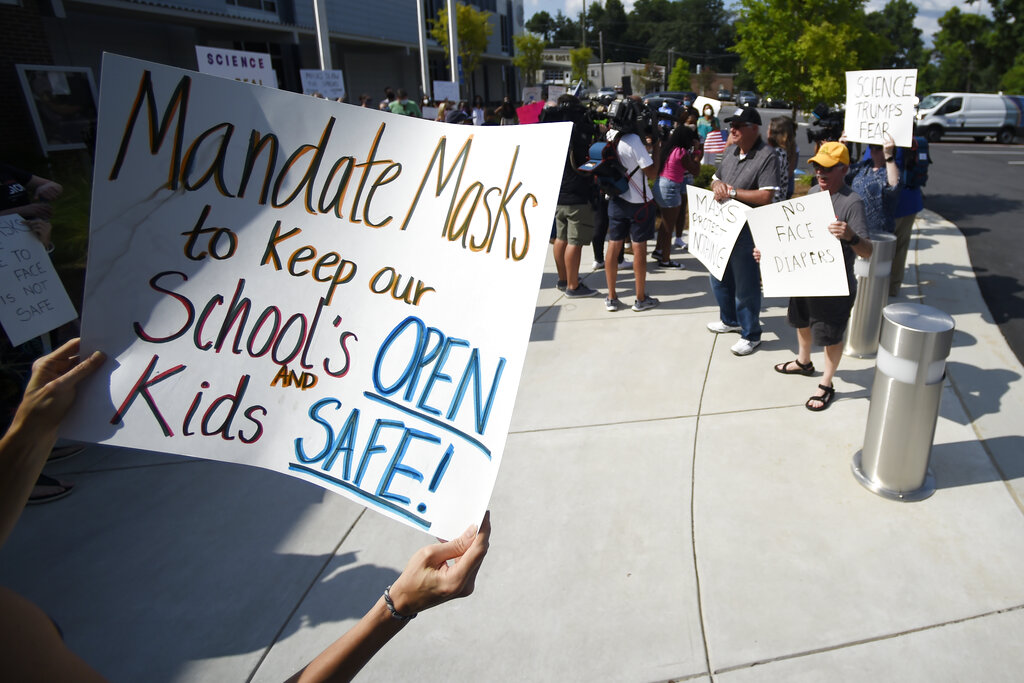 Meanwhile, the daily infections are up about 66 percent over the same period, back at levels last seen in early February, with the average topping 128,000 as of Friday, showed the university's data.

As the whole nation is grappling with the Delta variant which caused a new round of fatalities since the pandemic occurred 18 months ago, educators and the federal government's fight to keep the school mask mandate in place is still going on.

Hospitalizations of COVID-19 patients in their 30s have hit a new record, U.S. government data show, a sign of the toll that the highly contagious Delta variant is taking among the unvaccinated, The Wall Street Journal reported on Saturday.

Thirty-somethings, who are in prime ages for work and parenting, had largely avoided hospital stays for COVID-19 during earlier phases of the pandemic because of their relative good health. Yet the age group is seeing new coronavirus hospital admissions increase during the recent Delta-driven surge, which doctors and epidemiologists attribute to the failure of large numbers of Americans to get vaccinated and their highly active lives, according to the newspaper.

The rate at which adults ages 30 to 39 are entering hospitals with COVID-19 reached about 2.5 per 100,000 people as of last Wednesday, according to the latest data from the U.S. Centers for Disease Control and Prevention (CDC) and the Department of Health and Human Services, up from the previous peak of roughly 2 per 100,000 people in early January.

The same tragedy has happened to American children -- early versions of COVID-19 largely spared children but the Delta variant proved to be much less discriminating, and has led to more child hospitalizations, reported the National Public Radio (NPR) on Saturday.

"Now, health care workers on the front lines say there is another frightening prospect looming: a surge in children diagnosed with a combination of COVID-19 and respiratory syncytial virus (RSV)," said the report. The CDC said that it can be life-threatening in infants and young adults.

Pediatric hospitals in Texas and around the country are reporting unseasonably early outbreaks of RSV, a respiratory virus that mostly manifests as a mild illness with cold-like symptoms in adults but that can cause pneumonia and bronchiolitis in very young children, it added.

Moreover, the first case of the much-talked-about Lambda variant of COVID-19 was reported by Los Angeles health officials on Thursday. "But for all the fanfare, Lambda doesn't seem to have been much of a match for Delta -- yet," reported Deadline Hollywood on Saturday.

"We've only seen one Lambda variant among tests sequenced in our labs, and this was a sample from June," Los Angeles County Director of Public Health Barbara Ferrer was quoted as saying.

The fact that Lambda was sequenced in June and has not been found since would seem to indicate it's not spreading rapidly, if at all, in the county which, according to Ferrer, saw the powerful Delta variant account for "99 percent of all sequences last week."

The U.S. Department of Education sent letters on Friday to the Republican governors of Texas and Florida, as well as Florida school administrators, amid an escalating battle between the White House and state officials over school mask guidance while the Delta variant surges.

In the new letters to governors Ron DeSantis of Florida and Greg Abbott of Texas, Education Secretary Miguel Cardona stressed that their respective states' school mask policies go against "science-based strategies for preventing the spread of COVID-19" and sharply voiced the support of President Joe Biden administration for the states' educators.

"The Department recognizes that several school districts in your State have already moved to adopt such policies in line with guidance from the CDC for the reopening and operation of school facilities despite the State level prohibitions. The Department stands with these dedicated educators who are working to safely reopen schools and maintain safe in-person instruction," Cardona wrote in the letter.

In a further action in support of educators, the secretary clarified in his letter that school districts that lose state funding for enacting local safety measures can pull from federal relief dollars.

Meanwhile, Harris County, Texas, has filed a lawsuit against Governor Abbott on Thursday seeking to challenge his ban on mask mandates, the latest county to challenge the order thus far, reported The Hill.

Harris County Attorney Christian Menefee said in a statement posted on Twitter that he is seeking to challenge Executive Order GA-38, which bans schools and other local authorities from imposing mask mandates, adding that Abbott has "repeatedly misused his authority" when responding to the pandemic.

"The current wave of the Delta variant presents a real and imminent threat to our lost vulnerable populations, and local officials need to be able to respond to this crisis. The governor's executive order acknowledges this crisis, and then bans any meaningful acton to address it," Menefee said.

To ensure the safety and sustainability of its businesses, U.S. concert giant Live Nation has said that it will require all artists, crew and attendees to show proof of full vaccination or a negative test at their venues and upcoming festivals starting Oct. 4.

The company previously announced that it would be up to the artists whether to enforce the mandate. Live Nation further clarified guidelines that mandate a requirement for all shows at their venues starting in October, where permitted by law, and has also developed best practices for artists to request these policies at third party venues.

The CDC endorsed on Friday the use of a third dose of COVID-19 vaccines in immunocompromised people. CDC Director Rochelle Walensky signed off on recommendations approved hours earlier by the agency's Advisory Committee on Immunization Practices following the Food and Drug Administration's approval late Thursday. The recommendation applies to mRNA vaccines made by Pfizer/BioNTech and Moderna.

With a stockpile of at least 100 million doses at the ready, Biden administration officials are developing a plan to start offering coronavirus booster shots to some Americans as early as this fall even as researchers continue to hotly debate whether extra shots are needed, reported The New York Times on Saturday.

The first boosters are likely to go to nursing home residents and health care workers, followed by other older people who were near the front of the line when vaccinations began late last year. Federal officials have discussed starting the effort in October but have not settled on a timetable.