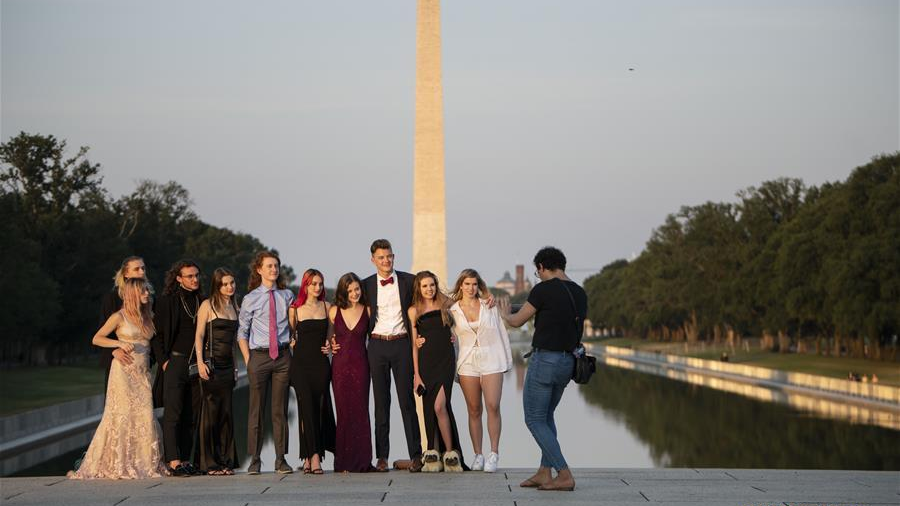 People pose for photos near the Lincoln Memorial Reflecting Pool in Washington D.C., the United States, July 2, 2020. The U.S. Centers for Disease Control and Prevention (CDC) has reported on Thursday a new single-day record of COVID-19 cases across the country at 54,357.  (File photo: CGTN)

U.S. deaths from the coronavirus pandemic might reach 410,000 by the end of the year, more than double the current death toll, and deaths could soar to 3,000 per day in December, the University of Washington's health institute forecast on Friday.

However deaths, could be reduced by 30% if more Americans wore face masks as epidemiologists have advised, but mask-wearing is declining, the university's Institute for Health Metrics and Evaluation said.

The U.S. death rate projected by the IHME model, which has been cited by the White House Coronavirus Task Force, would more than triple the current death rate of some 850 per day.

"We expect the daily death rate in the United States, because of seasonality and declining vigilance of the public, to reach nearly 3,000 a day in December," the institute, which bills itself as an independent research center, said in an update of its periodic forecasts.

The model's outlook for the world was even more dire, with deaths projected to triple to 2.8 million by Jan. 1, 2021.

The United States, which has the world's third largest population, leads the planet with more than 186,000 COVID-19 deaths and 6.1 million coronavirus infections.