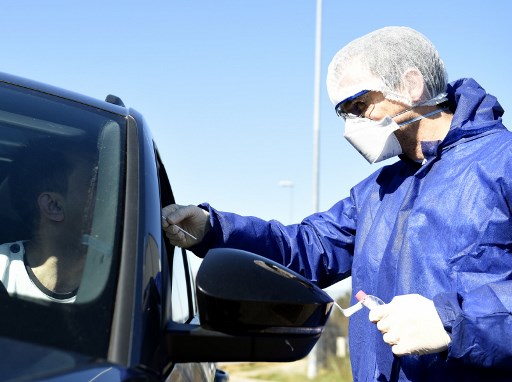 NEW YORK, April 6 (Xinhua) -- The number of deaths from COVID-19 in the United States surpassed 10,000 on Monday afternoon U.S. Eastern Time, as total cases topped 360,000, according to data compiled by the Johns Hopkins University.

U.S. Vice President Mike Pence said Monday night that "remarkable progress" in slowing down the transmission of the virus has been seen in states like Washington and California where stay-at-home orders and social distancing protocols have taken effect.

"That's a great tribute to the people of both of those states, and to all of their dedicated health care workers," said Pence.

Pence's words echoed New York Governor Andrew Cuomo, who said at Monday's briefing that the state has seen a "possible flattening of the curve" of the pandemic as new death tolls remained steady for the second day in a row.

Meanwhile, the numbers of the newly hospitalized, daily ICU admissions and daily incubations are all down from Sunday to Monday, which "are all good signs," said Cuomo.

It remains unclear whether the state is currently at a plateau or has reached the apex of the pandemic, said Cuomo while stressing that it's "no time to be lax."

The governor on Monday extended the statewide shutdown of non-essential businesses, the ban on gatherings and the closure of public schools until April 29 to keep the trend going.

"None of us has the right to be reckless in our own behavior, which compounds the problem we are dealing with," said Cuomo.

He also announced an increase of maximum fine for violations of the social distancing protocol from 500 to 1,000 U.S. dollars.

Later on Monday, the governor said on Twitter that he had talked to President Donald Trump, who agreed to the state's request to treat COVID-19 patients on the Navy hospital ship Comfort.

The ship, which arrived and docked at Manhattan's Pier 90 a week ago, was originally dispatched to New York by the president to treat non-COVID patients in order to relieve the city's overwhelmed hospital system.

The New York Times reported on Thursday that with 1,000 beds and some 1,200 staffers on board, the Comfort had only taken in some 20 patients.

At the epicenter of the pandemic, New York City Mayor Bill de Blasio said Monday that the city is also experiencing a crisis which is "discrimination and hatred directed at our Asian American communities, particularly our Chinese American community."

"I think it's absolutely unacceptable and I know legally it is unacceptable by the laws in New York City," said the mayor, who urged anyone who witnesses an act of discrimination or a hate crime to report it to police.

He noted that a lot of Chinese Americans are contributing to efforts to save lives and fight the pandemic, despite facing discrimination.

"I want to thank all of these good working people for what they are doing," he said.

In California, Governor Gavin Newsom announced Monday that the Golden State will lend 500 ventilators to the Strategic National Stockpile inventory in order to help other states like New York fight the COVID-19 epidemic.

California hospitals currently holds an inventory of 11,036 ventilators, a jump from their original estimate of 7,587 ventilators. That increase is due to old ventilators being refurbished and the acquisition of new ventilators, according to the governor.

"California is stepping up to help our fellow Americans in New York and across the country who are being impacted the hardest right now by the COVID-19 pandemic," said Newsom, adding that even though the state prepared for a surge of infections but "we can't turn our back on Americans whose lives depend on having a ventilator now."

This could be a timely assistance to New York, as de Blasio said Sunday the city's medical supplies could make it through the middle of the week and an additional 1,000 to 1,500 more ventilators are needed for the rest of the week.

By Monday night, New York state had reported 131,815 cases and 4,758 deaths, while California reported 16,310 cases and 388 deaths, according to Johns Hopkins University.