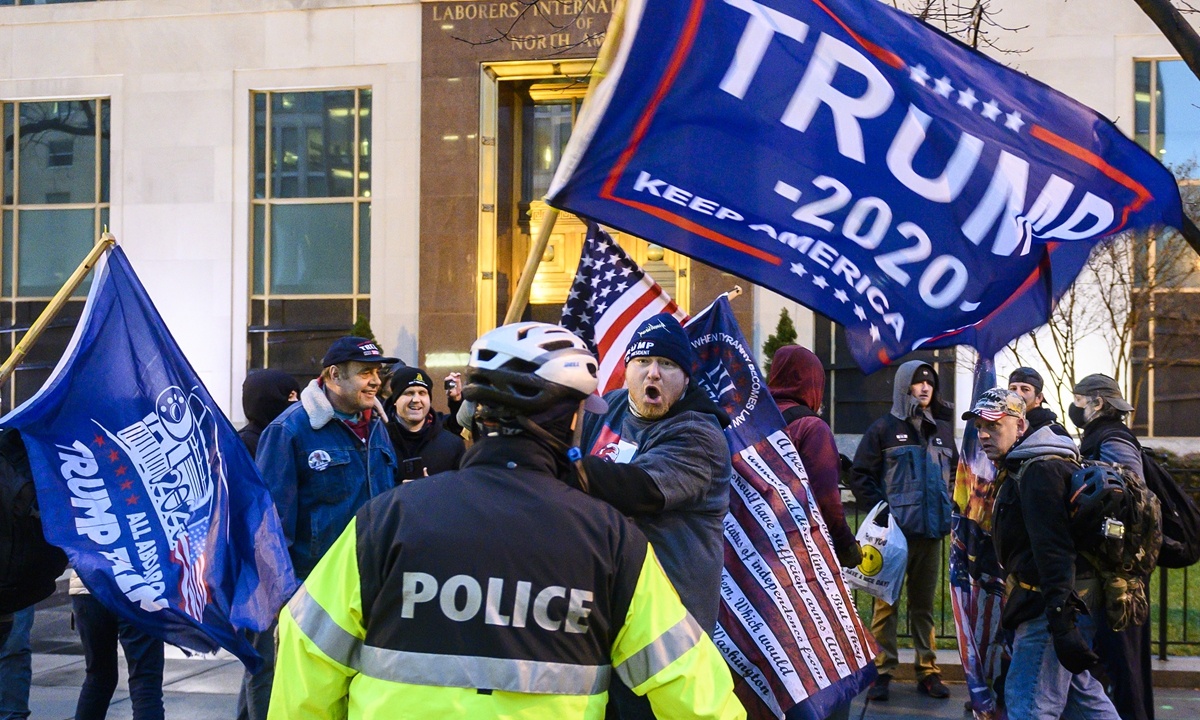 Pro-Trump supporters stand behind police as they argue with counter protesters during a confrontation near Black Lives Matter plaza in Washington, DC on Tuesday, on the eve of a rally of supporters of US President Donald Trump to protest the upcoming certification of Joe Biden's Electoral College as president. (Photo: AFP)

Western hypocrisy and double standards, which usually point the finger at China's information security and the application of AI technology, have been thoroughly exposed, with the US dealing with Capitol Hill rioters.

Despite its frequent defamation against China's use of technology in protecting public security, the US authority did not mind screening its own citizens with Clearview AI after the riot. The facial information app had "a 26 percent increase of searches," Clearview AI's chief executive Hoan Ton-Tha was quoted by the New York Times as saying.

US law enforcement was indentifying and seeking the Capitol Hill rioters through facial recognition, US media said. It forms a sharp contrast to US politicians who have been relentlessly attacking Chinese AI firms by accusing them of violating human rights and infringing on privacy, an industry representative from China's facial recognition industry said.

For Chinese AI firms that have been listed on Washington's sanction lists, it is obvious "double standards," as the saying goes "I can do but you can't," said the representative who spoke on condition of anonymity.

In the meantime, British politicians have been engaging in a verbal fight online after German Chancellor Angela Merkel called the COVID-19 variant in the UK the "British virus."

Roger Helmer, a former European Parliament member who once supported calling COVID-19 "the Chinese virus" on Twitter, was taunted by internet users after he appealed to stop referring to the COVID-19 strain as "originating in the UK."

"Is there a bigger hypocrite anywhere than Roger Helmer?" a user said under Helmer's account, attaching a screenshot of his former tweet that read, "why not 'Chinese virus?'"

Behind the double-standard mindset like Helmer is a shortage of scientific literacy and humanistic care, Li Haidong, a professor at the Institute of International Relations of China Foreign Affairs University, told the Global Times on Thursday.

"They seldom care about the scientific traceability of the virus; they just want to increase their exposure politicizing the pandemic," he said.

The mindset also reveals the Western world's deep-rooted hatred and colonial mentality toward China, Li added. "They are like trying to boss China around, arrogantly yelling what China can or can't do."