CHICAGO, May 11 (Xinhua) -- Chicago Board of Trade (CBOT) crop futures closed sharply lower in the trading week ending on May 10, pressured by bearish market data and prolonged trade tensions between the United States and China. 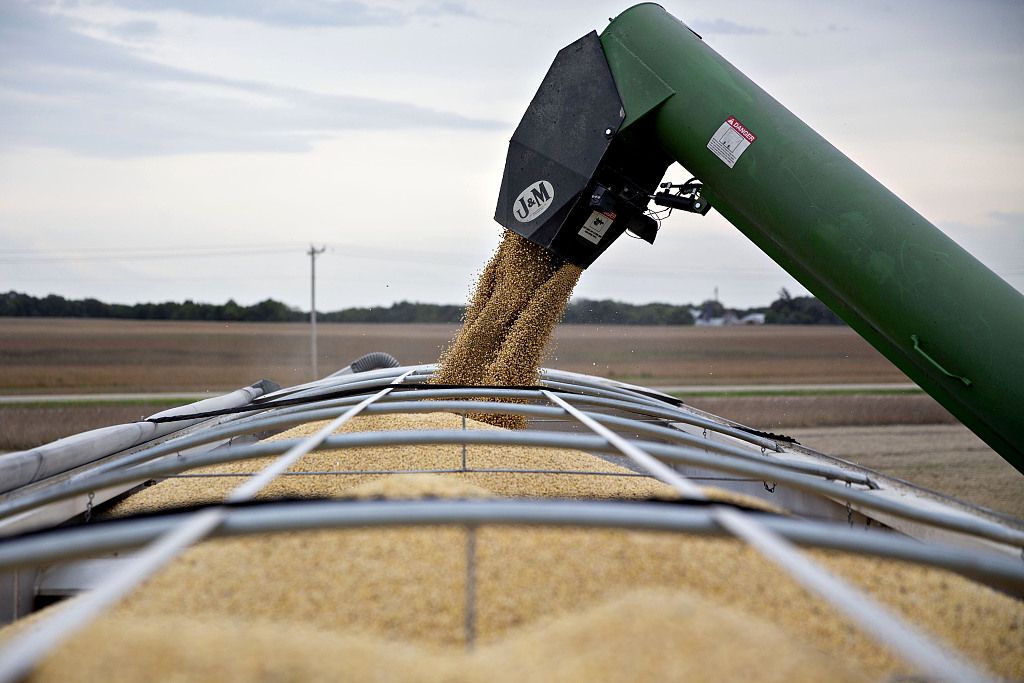 Soybeans are loaded into a grain cart during harvest in Wyanet, Illinois, US, on Tuesday, Sept. 18, 2018. (File photo: VCG)

The oil seed futures managed to end the week above 8 dollars per bushel, but spot soybeans even fell below the level.

The US Department of Agriculture (USDA) released on Friday its monthly supply and demand report, showing bearish estimates.

The 2019/20 outlook for US soybeans indicates slightly lower ending stocks compared to 2018/19, but still higher than the trade's estimate.

In another USDA weekly export report for the period of April 26-May 2, US soybean sales were unsatisfactory with eye-catching large cancellations of 263,500 metric tons for unknown destinations.

Meanwhile, the US corn outlook for 2019/20 market year is for larger production and domestic use, lower exports, and greater ending stocks. US corn exports are forecast to decline 25 million bushels in 2019/20, despite increasing world corn trade.

In the May supply and demand estimates report, the initial outlook for 2019/20 US wheat is for larger supplies, higher domestic use, lower exports, and larger stocks. Moreover, higher world ending stocks and fierce competition in international market will pressure US wheat further.

Net US wheat sales between April 26 and May 2 were pegged at 90,600 metric tons for delivery in 2018/19, a market year low. The export volume was down 26 percent from the previous week and 68 percent from the prior four-week average.