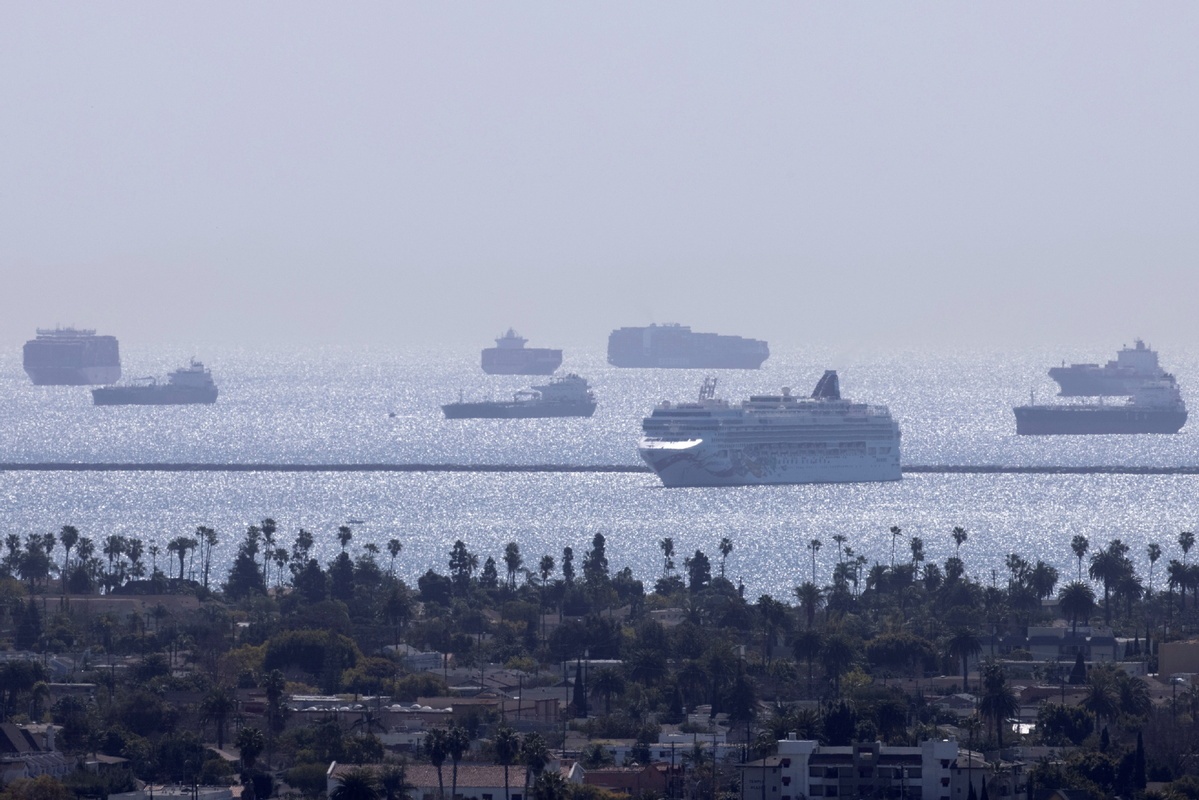 The cruise ship the Norwegian Jewel sits near dozens of container ships off the coast of Long Beach, California, US, Feb 25, 2021. (Photo: Agencies)

How does a cruise line conduct "simulated voyages" with volunteer passengers?

That's one of the rules from the Centers for Disease Control and Prevention (CDC) that US cruise lines say are either indecipherable or impractical.

"I refer to it as the 'impossible-to-sail order' because no business could operate profitably," Captain John Murray, Port Canaveral's CEO, told The Wall Street Journal.

In October 2020, the CDC lifted its no-sail order for US cruise ships and replaced it with its "Framework for Conditional Sailing Order'', a compilation of protocols — including the simulated voyages regulation — needed for cruising to resume again.

A trade group representing most of the world's cruise lines is pressing the CDC to allow ships to start sailing again from American ports by early July, calling the US cruise ban "outdated".

"The lack of any action by the CDC has effectively banned all sailings in the largest cruise market in the world," the Cruise Lines International Association said in a statement Wednesday. The group said a July restart would bring the industry in line with President Joe Biden's goal of "getting the nation closer to normal" by the Fourth of July.

Last week, the mayor of Miami-Dade County, which boasts the world's busiest cruise port, last week urged the CDC to work on a plan to restart cruises by July 4.

Florida Governor Ron DeSantis threatened to file a lawsuit if the CDC doesn't allow US-based cruising to resume by summer. "Is it OK for the government to just idle an industry for a year?" the Republican governor said. He said people now need to decide for themselves what they are willing to risk.

Lines have resumed operations in other parts of the world. They are going around the CDC to countries that are more hospitable to cruising — and outside CDC's jurisdiction — including Europe, Asia and the South Pacific. A few have announced plans to cater to North Americans from Caribbean ports.

Since starting again, nearly 400,000 passengers have sailed in more than 10 markets with safety measures such as testing, mask-wearing and distancing in place, the cruise line association said. Based on public reports that the group tracks, it said there have been fewer than 50 reported coronavirus cases.

Most US cruise lines have canceled sailings from the United States through the end of May or June, while the industry is pressuring the CDC to let US cruises start again.

But the CDC, which said it is working on detailed instructions for cruise lines to return to service, has rebuffed that request. In a statement, CDC spokeswoman Caitlin Shockey said the conditional sailing order remains in effect until Nov 1. "Returning to passenger cruising is a phased approach to mitigate the risk of spreading COVID-19,'' she said. "Details for the next phase of the [order] are currently under interagency review."

The closure of US ports has been costly.

Carnival Corp told investors in February that it expected to spend an average of $600 million in cash a month just to keep vessels maintained, sustain corporate operations and invest in preparations to return to sea. Without CDC direction, cruise lines can't begin the long process of implementing safety measures and recalling thousands of workers from around the world, industry officials said.

The CDC's hesitancy may in part reflect the cruise industry's troubles at the beginning of the pandemic. US ports refused entry to ships with passengers sick with COVID-19, and giant vessels were stuck at sea.

"I hate to speculate, but I think CDC looks at it and feels like, 'Is this a risk we really need to take?'" said Brian Salerno, senior vice-president of global maritime policy at Cruise Lines International Association, the cruise industry's main trade group. "To have an industry sidelined like this, based on a bad perception, is a lot to ask."

The pandemic wiped out, at least temporarily, what was a growth industry. In 2019, about 14 million cruise-goers departed from the US, generating a record $55.5 billion for the US economy and supporting more than 436,000 American jobs, according to the cruise lines association.

With revenue deeply depressed over the course of 2020, the companies raised cash with huge bond and stock issues, according to industry analysts. They also have aggressively pared expenses, furloughed workers and in some cases sold off older, less-efficient ships, which aren't as profitable to operate.

Cruise-related businesses, including ports, say they have been trying to call Washington's attention to their plight over the past year, pressing lawmakers and administration officials.

Unions representing port workers on both coasts say workers have lost hundreds of thousands of hours since the pandemic hit.

As the US cruise line industry looks to restart, several lines have started announcing vaccination requirements for guests and crew members.

Royal Caribbean announced recently that it will begin a handful of vaccine-mandated sailings out of the Bahamas in June. Those cruises, scheduled to run through August, will be available to "adult guests fully vaccinated against COVID-19 and those under age 18 with negative test results", the company said. Royal Caribbean said that the crews on those vessels will be vaccinated as well.