WASHINGTON, Aug. 15 (Xinhua) -- US COVID-19 cases could break 200,000 a day as the latest surge of the virus driven by the Delta variant is "going very steeply upward with no signs of having peaked out," said National Institutes of Health Director Francis Collins on Sunday. 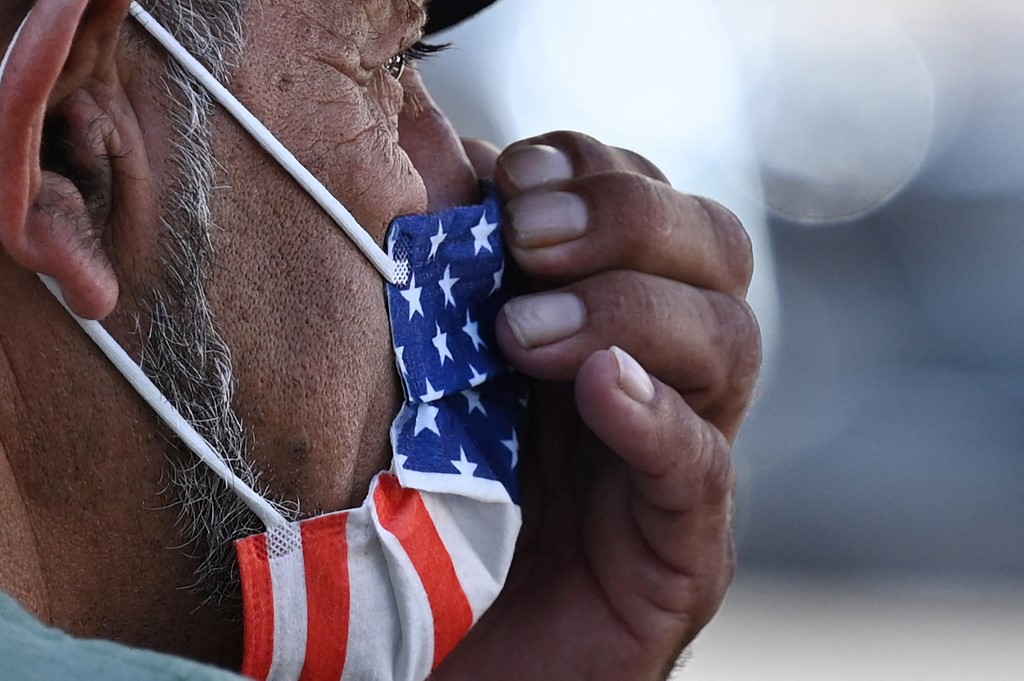 A man adjusts his American flag face mask on July 19, 2021 on a street in Hollywood, California, on the second day of the return of the indoor mask mandate in Los Angeles County due to a spike in coronavirus cases. (File photo: AFP)

"I will be surprised if we don't cross 200,000 cases a day in the next couple of weeks, and that's heartbreaking considering we never thought we'd be back in that space again. That was January-February, that shouldn't be August," Collins told Fox News Sunday.

"But here we are with Delta variant, which is so contagious, and this heartbreaking situation where 90 million people are still unvaccinated who are sitting ducks for this virus and that's the mess we're in. We're in a world of hurt and it's a critical juncture to try to do everything we can to turn that around," said Collins.

The sharp rise in the number of pediatric cases in the country is "very worrisome," he said, noting at least 400 children have died from the virus.

"And right now we have almost 2,000 kids in the hospital. Many of them in ICU, some of them under the age of four. So anybody tries to tell you, don't worry about the kids. Virus won't really bother them. That's not the evidence," said Collins. "Especially with Delta being so contagious kids are very seriously at risk and it's up to all of us to do everything we can to protect them as well as we're trying to protect everybody else."

Children under the age of 12 have not been authorized to receive the COVID-19 vaccine.

As of Saturday, the country has averaged about 129,000 daily new cases over the last seven days, a number that has risen every day since July 5, according to data from Johns Hopkins University.

Almost 94,000 COVID-19 cases among children were reported in the past week, "a continuing substantial increase," said the American Academy of Pediatrics in a report updated on Monday.

Nearly 4.3 million children had tested positive for COVID-19 in the country as of Aug. 5 since the onset of the pandemic.