US deaths from coronavirus surpass 100,000 milestone 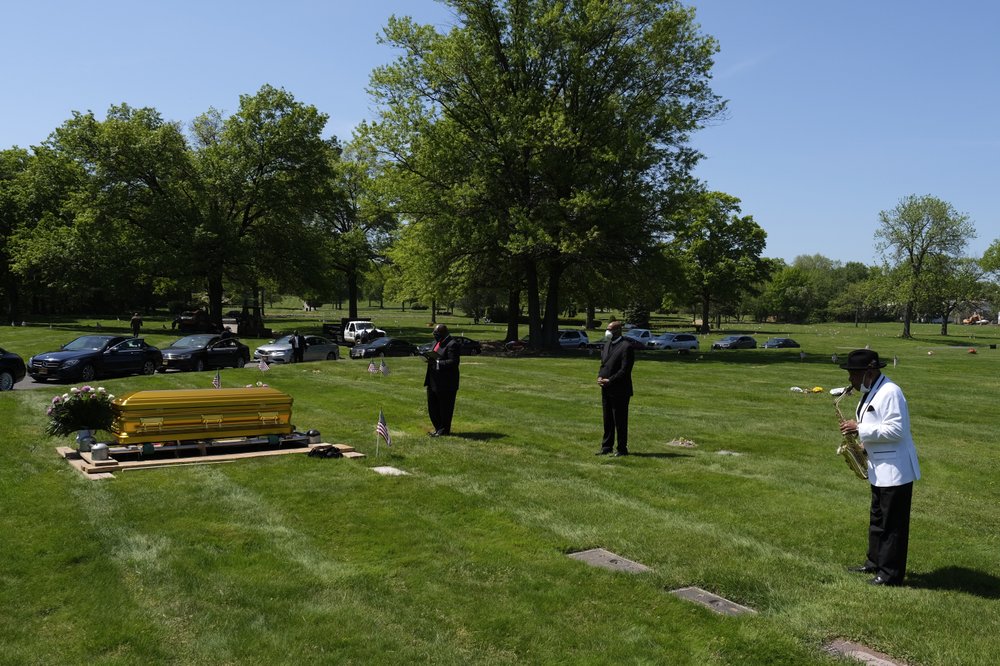 Lonnie Youngblood, right, plays saxophone while waiting for friends and family to gather for the interment of Bishop Carl Williams, Jr. in Union, N.J., Thursday, May 21, 2020. (Photo: AP)

The US surpassed a jarring milestone Wednesday in the coronavirus pandemic: 100,000 deaths.

That number is the best estimate and most assuredly an undercount. But it represents the stark reality that more Americans have died from the virus than from the Vietnam and Korea wars combined.

“It is a grim milestone,” said Josh Michaud, associate director of global health policy with the Kaiser Family Foundation in Washington. “It’s a striking reminder of how dangerous this virus can be.”

Worldwide, the virus has infected more than 5.6 million people and killed over 350,000, with the US having the most confirmed cases and deaths by far, according to a tally by Johns Hopkins University. Europe has recorded about 170,000 deaths, while the US reached more than 100,000 in less than four months.

At the end March, the United States eclipsed China with 3,500 deaths. Now, the U.S. has not only the highest death total, but the highest number of confirmed cases of COVID-19 in the world, making up more than 30% of the global total.

Early on, President Donald Trump downplayed the severity of the coronavirus and called it no worse than the common flu. He previously predicted the country wouldn’t reach this death toll. As early as March, Dr. Anthony Fauci, the government’s top infectious disease expert, was warning that COVID-19 could claim more than 100,000 lives in the U.S.

Critics have said deaths spiked because Trump was slow to respond, but he has contended on Twitter that it could have been 20 times higher without his actions. He has urged states to reopen their economies after months of stay-at-home restrictions.

The virus exacted an especially vicious toll on Trump’s hometown of New York City and its surrounding suburbs, killing more than 21,000. At the peak, hundreds of people were dying per day in New York City, and hospitals, ambulances and first responders were inundated with patients.

The densely packed New York metropolitan area, consisting of about 20 million people across a region that encompasses the city’s northern suburbs, Long Island and northern New Jersey, has been the hardest-hit corner of the country, accounting for at least one-third of the nation’s deaths.

There is no vaccine or treatment for COVID-19, though several emergency treatments are being used after showing some promise in preliminary testing.

Worldwide, about a dozen vaccine candidates are starting to be tested or getting close to it. Health officials have said studies of a potential vaccine might be done by late this year or early next year.