WORLD US democracy problems can only be solved by American people themselves: Chinese FM spokesperson

US democracy problems can only be solved by American people themselves: Chinese FM spokesperson 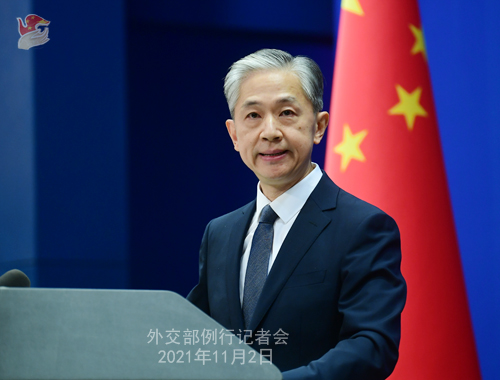 BEIJING - A Chinese Foreign Ministry spokesperson on Tuesday said that problems in US democracy can only be solved by the American people themselves, and that fake democracy will certainly meet resistance from the international community.

Spokesperson Wang Wenbin made the remarks at a daily press briefing in response to a query on the results of a recent poll by the US National Public Radio, which showed that 81 percent of American people believe democracy in the country faces a severe threat.

Noting that China takes no interest in commenting on how American people view democracy in their country, Wang said democracy should be a right enjoyed by all peoples rather than a patent held by certain countries.

He said that whether or not a country is democratic should be judged by its people rather than by a few people from the outside. "There are multiple ways to realize democracy, and it is impossible to expect all countries to follow the exact same pattern."

Democracy in the United States has its own problems, and these problems can only be solved by the American people themselves, rather than by other countries, Wang added.

Wang said the paths and modes of democracy in different countries should be suited to their own national conditions and development, and should be explored and developed by the countries' citizens themselves.

He pointed out that peddling one's own mode of democracy via force, coercion and pressure is in total violation of that democracy, and that it is hegemonism under the pretext of democracy, which will only intensify division and confrontation and lead to conflict and chaos.

"These acts of fake democracy are sure to meet resistance and opposition from the international community," the spokesperson said.