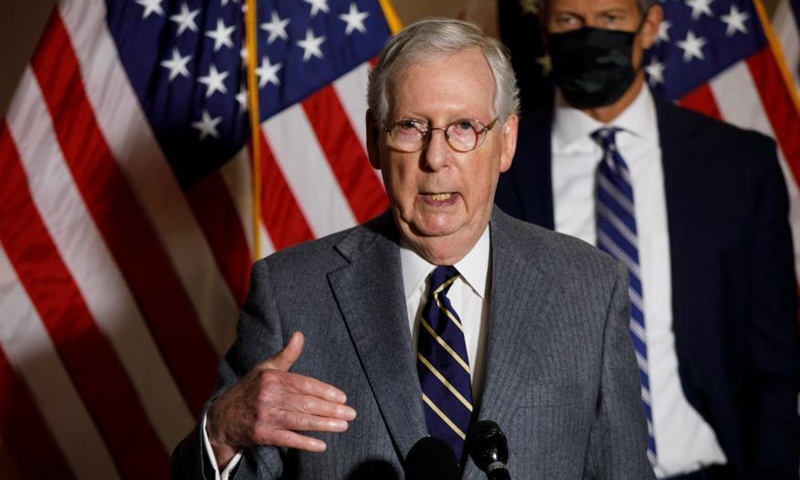 US Democratic leaders on Tuesday asked Senate Majority Leader Mitch McConnell to restart negotiations on a new COVID-19 relief package this week as confirmed cases are surging across the country.

"We write to request that you join us at the negotiating table this week so that we can work towards a bipartisan, bicameral COVID-19 relief agreement to crush the virus and save American lives," U.S. House Speaker Nancy Pelosi and Senate Democratic Leader Chuck Schumer wrote in a letter to McConnell.

"What is becoming clear to all Americans is that we cannot achieve real economic recovery until we address the expanding public health crisis," they wrote, adding confirmed COVID-19 cases are "skyrocketing" across the country with reporting averaging over 100,000 cases and more than 1,000 deaths per day.

"The COVID-19 pandemic and economic recession will not end without our help. It is essential that this bill have sufficient funding and delivers meaningful relief to the many Americans who are suffering," they argued.

The Democratic leaders noted that they agreed to compromise on a relief package and lowered their request by 1.2 trillion U.S. dollars during negotiations with Treasury Secretary Steven Mnuchin and White House Chief of Staff Mark Meadows earlier this year.

Since that time, McConnell lowered his proposal from 1 trillion dollars to 500 billion dollars, "despite the consensus from economists and experts that the country requires a much larger injection of aid," they claimed.

"For the sake of the country, we ask that you come to the table and work with us to produce an agreement that meets America's needs in this critical time," said the Democratic leaders.

"Democrats still want coronavirus relief for the entire country held hostage over a massive slush fund for their own use," McConnel said on the Senate floor.

The Democrats-controlled House of Representatives in early October passed a 2.2-trillion-dollar relief bill. Some Senate Republicans, however, insisted on a relief package below 1 trillion dollars, and failed to advance a 500-billion-dollar bill in late October.

Economists, as well as Federal Reserve officials, have repeatedly argued that more fiscal relief is needed to sustain the U.S. economic recovery, warning of dire consequences if further fiscal support is not provided in time.