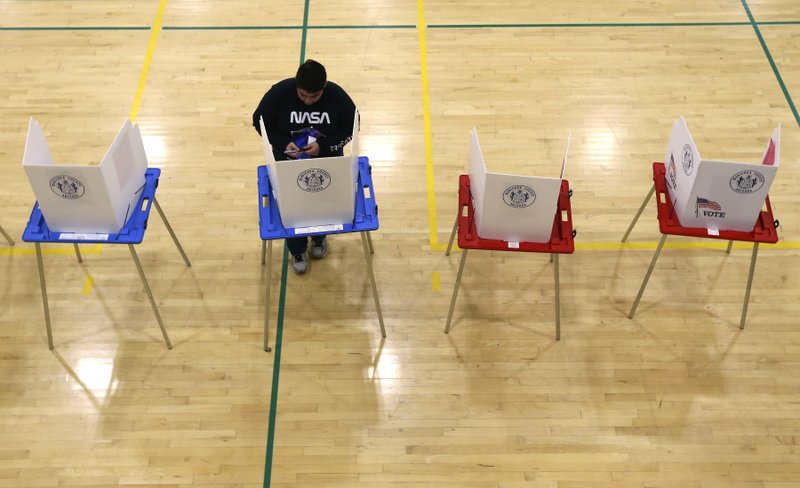 In this March 5, 2020, photo a student votes in a mock Democratic presidential preference election and voter registration drive at Maryvale High School in Phoenix. (Photo: AP)

The coronavirus is idling a potentially powerful force in the Democratic Party — liberal canvassers who go door to door or cruise through public gatherings, clipboard in hand, to register new voters.

Such efforts have been all but frozen because Americans now are being asked to stay inside and keep their distance to prevent the spread of the virus. In Arizona, Latino registrations drives have moved online. In Michigan, community organizers are trying to reach out remotely.

It’s a quiet change with potentially big consequences for Democrats up and down the ballot in the November general election. The party is depending on expanding the electorate to include more Latinos, young people and other groups that lean Democratic but have high rates of unregistered voters. The process of registering those voters is a yearlong, labor intensive project. An extended hiatus is a serious setback, particularly in a presidential election expected to hinge on which party turns out its key voting blocs.

“The most effective engagement is person to person, so having to cease those operations will have an effect,” said Clarissa Martinez, deputy vice president for UnidosUS, the nation’s largest Hispanic advocacy group and formerly the National Council of La Raza.

UnidosUS said it has moved its voter registration campaign online after temporarily sidelining in-person canvassing aimed at signing up 145,000 Latinos, mostly in Florida, but also Arizona, California, Nevada and Texas.

“Now, we are looking at texts, calls and digital tools to get people to register,” Martinez said.

Smaller groups are also hobbled. One Arizona, a coalition of nonprofit groups that hoped to register 250,000 new voters this year in the state said it pulled some 200 canvassers from the streets last week as public health measures shuttered schools and businesses.

In Michigan, Detroit Action, which organizes minorities in that city, is practicing social distancing like much of the country. Staffers are working from home and limiting in-person contact. “It’s a kind of oxymoronic for community organizing,” executive director Brendan Snyder said.

“Our constituency, black and brown folks, are young people, housing insecure, sometimes formerly incarcerated,” Snyder said. “Those are vulnerable populations that will not be able to get to the polls if this thing extends.”

Though Democrats have normally been most reliant on electorate-expanding efforts, a slowdown in voter registration could affect Republicans as well. President Donald Trump’s reelection campaign has vowed to find and register thousands of new and infrequent voters to expand its voter pool.

Trump has sent out canvassers to expand registration and sign up new voters at his rallies, which now are on hold, like all mass gatherings. His campaign has shifted to livestreamed events featuring prominent surrogates and will push online volunteer training and voter registration.

“Thanks to our fantastic data operation, our team will be increasing online voter registration efforts by identifying supporters of President Trump such as rally attendees who are not currently registered to vote and making sure they’re registered come November,” spokeswoman Ali Pardo said.

COPING WITH THE OUTBREAK:

African Americans and Latinos both have lower turnout and registration rates than whites and make up a far greater share of the Democratic electorate when compared with the Republican electorate. That forces Democrats to rely more on registering new voters and getting those who don’t normally vote to come out and vote.

“It’s a structural necessity,” said Matt Morrison, executive director of Working America, a 3-million-member labor-backed national group that tries to turn out workers who do not belong to a union. “This puts pressure on us.”

Morrison’s group is relying on emails and text messages to reach out, but it’s easier to do face to face.

Morrison expect in-person efforts will be sidelined until July, when his group will have to move scale up fast before November. He’s already adjusted his targets. His group aimed to add 500,000 votes to aid the candidates they support, largely Democrats, around the country. They have scaled back that goal to 300,000 to 400,000, and in fewer states.

“Every progressive organization needs to be looking at their plans and how it can use these lemons to make lemonade,” Morrison said.

In Arizona, liberal groups have worked mightily to expand the minority electorate since the GOP-controlled Legislature passed a controversial immigration law in 2010. Last year, One Arizona reported registering 190,000 people, predominantly Latino and Native American. Democrats narrowly won a few statewide races for the first time in a decade, including a US Senate seat.

Earlier this month, at a majority Latino high school in Phoenix, the coalition registered hundreds of students who will turn 18 before Election Day. The school is now closed, along with all others statewide.