US Democrats push for John Bolton 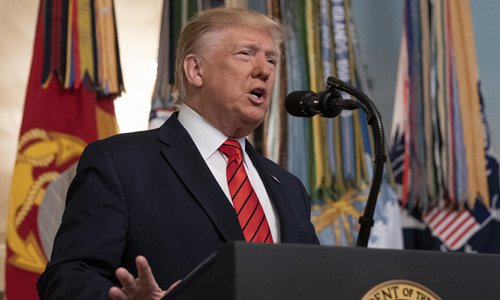 US President Donald Trump answers reporter's questions after making a statement at the White House in Washington, DC on the death of IS leader Abu Bakr al-Baghdadi during a US military raid in Syria, on Sunday. (Photo: IC)

Democratic lawmakers have summoned several little-known US officials to testify this week in their impeachment inquiry of President Donald Trump but have their eye on a more prominent player - former national security adviser John Bolton.

The House of Representatives Democrats running the inquiry want to hear firsthand from the mustachioed foreign-policy hawk who, according to the testimony of other officials, was alarmed by a White House effort to pressure the president of Ukraine to investigate Trump's political rivals.

"Obviously he has very relevant information and we want him to testify," House Intelligence Committee Chairman Adam Schiff, one of the Democrats leading the effort, told ABC's This Week on Sunday, referring to Bolton.

That may not be easy. White House officials have tried, with some success, to block current and former government officials from testifying in the inquiry. Secretary of State Mike Pompeo, acting White House Chief of Staff Mick Mulvaney and Trump's personal lawyer, Rudy Giuliani, are among those who have defied House subpoenas for documents, although other witnesses have appeared before the committee despite orders from the administration to steer clear.

The White House says the probe is illegitimate because the House did not hold a formal vote in order to start it.

Congressional sources told Reuters last week that they may call Bolton to testify in public hearings that are expected to start in the coming weeks. On Sunday, Schiff said he anticipated the White House would try to bar the former aide from appearing, but did not say whether he would he planned to call Bolton to testify in public or behind closed doors.

Bolton, who was fired by Trump in September after the pair clashed over how to handle foreign policy challenges, has not commented publicly on the impeachment effort.

The Democratic-led House committees are focusing on Trump's July request to Ukrainian President Volodymyr Zelenskiy that he investigate former US vice president Joe Biden, a leading 2020 Democratic presidential candidate, and his son Hunter Biden, who had served on the board of a Ukrainian gas company.

US law prohibits candidates from accepting foreign help in an election.