WORLD US Department of Justice release report on Russia probe

US Department of Justice release report on Russia probe

In a long-anticipated report, the U.S. Department of Justice (DOJ) concluded on Monday there was no political bias in the launching in 2016 of a federal probe into potential collusion between the Trump campaign and Russia. 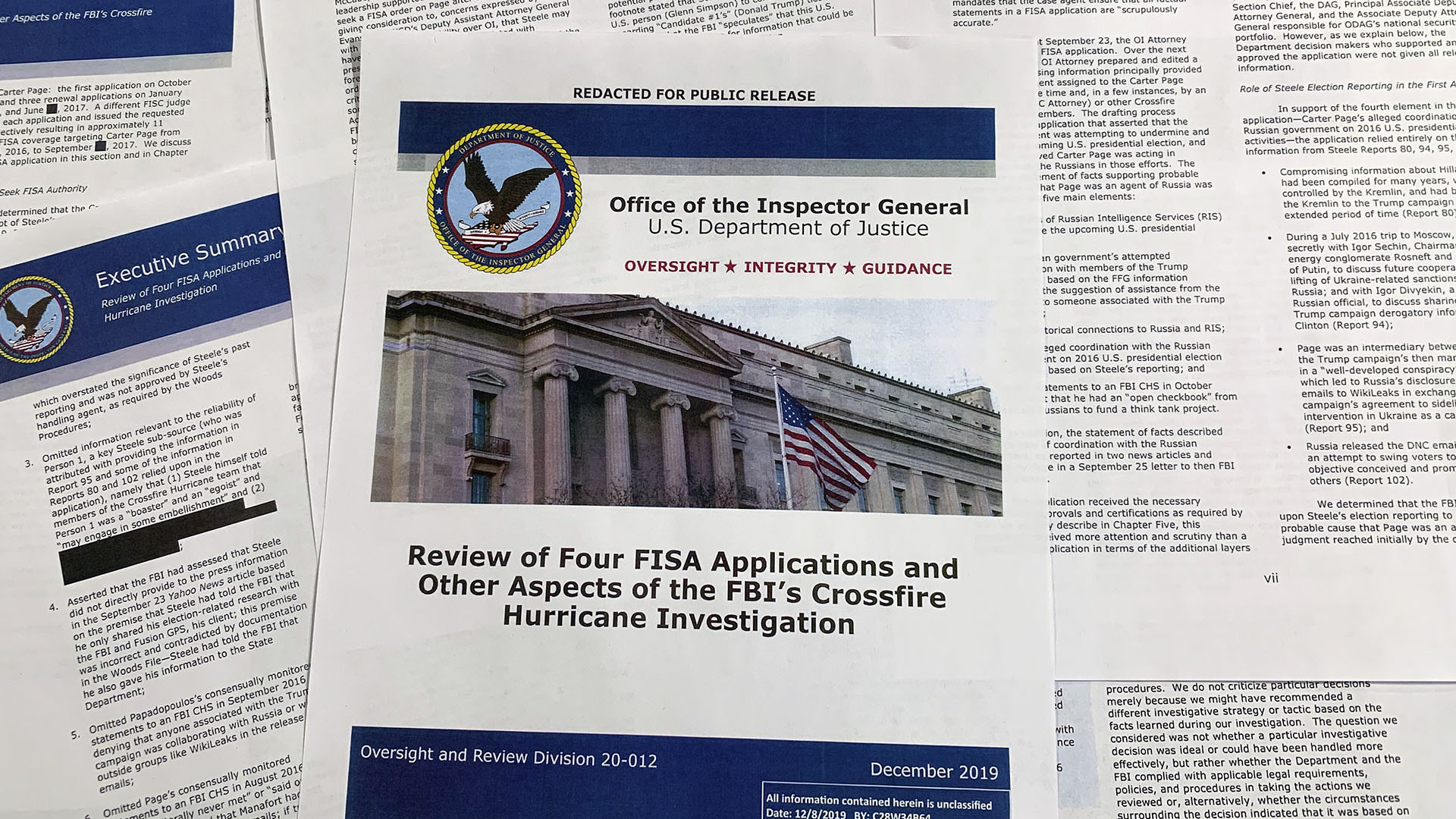 The report issued by the Department of Justice inspector general is photographed in Washington, Monday, Dec. 9, 2019. The report on the origins of the Russia probe found no evidence of political bias, despite performance failures. (Photo: AP)

In its findings, the Department notes it saw no direct evidence to support claims of bias against then-candidate Donald Trump.

But the report did identify inaccuracies and omissions by the FBI, specifically in the agency's handling of requests for surveillance of a former Trump campaign adviser.

The report, written by the DOJ Inspector General Michael Horowitz, reviewed the FBI's four FISA applications made to the U.S. Foreign Intelligence Surveillance Court, as well as other aspects of the agency's “Crossfire Hurricane Investigation” into the actions of the Trump campaign.

Christopher Wray, FBI director, pledged to take action based on the report's findings.

Wray, who took on the top job in August 2017, wrote on Monday that he has emphasized to agents, analysts and staff the "importance of doing things the right way.”

In a response letter to the Inspector General Horowitz, Wray wrote,  "I am humbled to serve alongside these dedicated men and women, and I am confident that the actions we are taking will strengthen our historic institution, ensure that we continue to discharge our responsibilities objectively and free from political bias, and better position us to protect the American people against threats while upholding the Constitution.”

On several occasions, U.S. President Donald Trump has claimed, without providing proof, that the FBI planted an agent within his campaign.  The report found  "no evidence" of such action.

Trump's Attorney General, William Barr, welcomed the DOJ's critique of the FBI's handling of the surveillance process. But he rejected the inspector general's conclusion that the FBI had sufficient reason to launch its probe.

In a statement, Nadler wrote, “right-wing media will continue to prop up these conspiracy theories to deflect from the President’s misconduct, but we will not be distracted by their baseless allegations.”

Republicans argue the FBI depended too heavily on a dossier prepared by a former British intelligence officer, Christopher Steele. They allege Steele was funded, in part, by Hillary Clinton's presidential campaign and by the Democratic Party.

In May 2017, Robert Mueller was appointed as a special counsel to head the FBI probe.  Mueller's nearly two-year investigation led to 34 indictments, and saw some close Trump associates go to jail.

Mueller concluded earlier this year, “If we had confidence that the President clearly did not commit a crime, we would have said that. We did not, however, make a determination as to whether the president did commit a crime... a president cannot be charged with a federal crime while he is in office. That is unconstitutional. Even if the charge is kept under seal and hidden from public view, that too is prohibited."