WORLD US deploys aircraft carrier, bombers over 'threat' by Iran

US deploys aircraft carrier, bombers over 'threat' by Iran 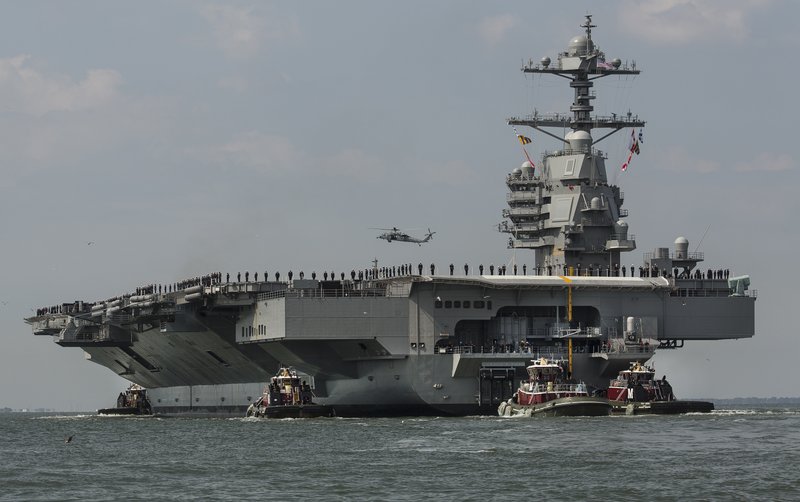 WASHINGTON, May 8 (Xinhua) -- US Secretary of State Mike Pompeo paid an unannounced lightning visit to Iraq on Tuesday in the wake of US accusations of a "credible threat" by Iran in the region, which has lead to the deployment of a US aircraft carrier group and bombers to the Middle East.

Pompeo on Tuesday told the traveling press during his flight to Baghdad that he paid the sudden visit to Iraq because of "information that indicates that Iran is escalating their activity."

Citing three senior US officials, The New York Times reported on Monday that intelligence indicated that US troops in Iraq and Syria might be under "threat" by Iran.

Washington claimed it made the decision of sending Abraham Lincoln aircraft carrier group to the region on the above reason.

US television network CNN cited two US officials as saying "the very public statements are aimed at deterring Iran," though "there is no indication any action by Iran is imminent."

Iranian Foreign Minister Mohammad Javad Zarif dismissed such accusations. In a tweet posted on Tuesday, Zarif noted that the United States and some of its regional allies have been spreading false accusations of "Iranian threats."

In a White House statement on Sunday, US National Security Advisor John Bolton announced that the deployment of aircraft carrier group and bombers aimed "to send a clear and unmistakable message to the Iranian regime that any attack on United States interests or on those of our allies will be met with unrelenting force."

The accusations against Iran and the US military deployment is the latest in its "maximum pressure" strategy against Iran.

Observers said the recent move, which comes a full year after the US withdrawal from the 2015 Iranian international nuclear deal and re-imposition of sanctions against Tehran, is exerting military pressure alongside long-standing pressure on the economy and diplomatic relations.

Tehran has been taking a hard-line stance and urging national unity and solidarity in the face of resolute US threats. Iranian President Hassan Rouhani said in letters to five world leaders on Wednesday that Iran will scale back its commitments to the nuclear deal in 60 days, according to media reports.

Rouhani also said Iran will increase its uranium enrichment level and is ready for talks with Europe on the nuclear deal, namely the Joint Comprehensive Plan of Action (JCPOA).

Analysts are concerned the escalating tension could trigger a military conflict.

"It is time now for cooler heads to prevail and for both sides to back away from the precipice toward which they are moving," Richard Clarke, who served for thirty years in US government national security agencies, wrote in an article in the New York Daily News.

Colin Kahl, a professor at Stanford University, warned in his piece for Foreign Policy that America's Iran policy is becoming dangerous, and there is growing evidence Washington is on a path toward war.

"Before matters spin out of control, it would be wise for the administration to dial back the rhetoric, open high-level channels with Tehran, and signal a willingness to reenter the nuclear deal as a starting point for new negotiations," said Kahl.

Since US President Donald Trump pulled Washington out of the JCPOA last May, Washington has returned a series of energy and financial sanctions against the Islamic republic, despite sanction waivers for some major oil buyers.

However, in a bid to pile up pressure on Iran, Washington announced in April that it would not re-issue sanction waivers for major importers to continue buying Iran's oil when they expire in early May.

Despite mounting US pressure, the European Union last week reiterated its support for the JCPOA. To weather off US sanction pressures, Iran's oil trading partners in Europe have been pinning their hopes on the implementation of an EU-designed payment channel.

Middle East countries such as Qatar and Turkey also oppose unilateral US sanctions, with Turkey seeking a bartering system to pass through the sanctions to continue trade with Iran.