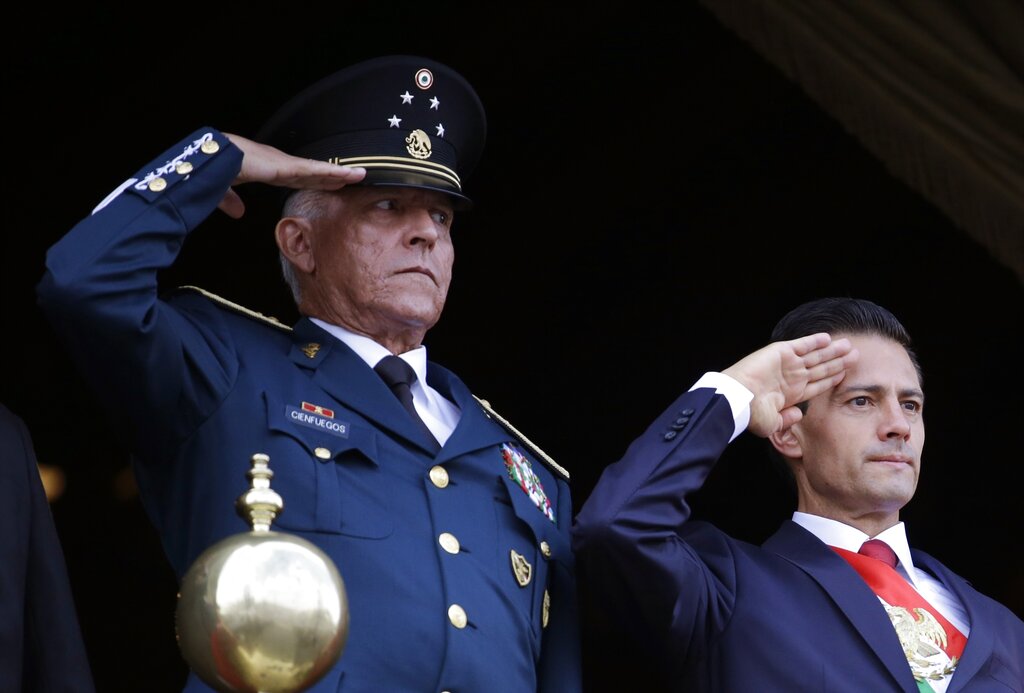 Barr said the department would drop its case so Cienfuegos “may be investigated and, if appropriate, charged, under Mexican law.” Cienfuegos, who was charged in federal court in Brooklyn, was arrested in Los Angeles last month.

Cienfuegos was indicted by a federal grand jury in New York in 2019 and accused of conspiring to participate in an international drug distribution and money laundering scheme. Prosecutors alleged he helped the H-2 cartel smuggle thousands of kilos of cocaine, heroin, methamphetamine and marijuana while he was defense secretary in 2012-2018.

Prosecutors said intercepted messages showed that in exchange for bribes, Cienfuegos worked to ensure that the military did not take action against the cartel and that operations were initiated against rivals. He was also accused of introducing cartel leaders to other corrupt Mexican officials.

Mexicoan Foreign Affairs Secretary Marcelo Ebrard said later at a news conference that Mexico had expressed its displeasure with not being advised of the investigation against Cienfuegos and requested, then received, the evidence against him.

“We don't see it as a path to impunity but rather as an act of respect toward Mexico and Mexico's armed forces,” Ebrard said.

“It doesn't have anything to do with it. They are two different processes,” Ebrard said.

He said it still depended on the U.S. judge in the case. “Why are we talking about it? Because the judge ordered it be made public.”

Cienfuegos would not necessarily be placed in custody in Mexico. “In Mexico, he will be received by the Attorney General's Office,” Ebrard said. “In what status will he come? That of a Mexican citizen who does not face charges in the United States at this moment.”

In court papers last month, U.S. prosecutors argued Cienfuegos was a significant flight risk and said he would “likely seek to leverage his connections to high level H-2 Cartel members in Mexico, as well as former high-level corrupt government officials, to assist him in fleeing from U.S. law enforcement and shelter him in Mexico.”

Had he been convicted of the charges in the U.S., he would’ve faced at least 10 years in federal prison.

Mike Vigil, the Drug Enforcement Administration’s former chief of international operations, said the decision "is nothing more than a gift, a huge gift” from President Donald Trump to Mexican President Andrés Manuel López Obrador, and may be the first in a series of politically motivated pardons or case closures in the closing days of the Trump administration.

Vigil called the decision “absolutely discouraging and disappointing,” predicting that “there is more coming down the road” in terms of pardons or case closings.

“No matter how you slice the pie, this is nothing more than a last ditch favor to López Obrador,” Vigil said, noting that “López Obrador has been very subservient to Donald Trump on immigration issues and has hesitated in congratulating Joe Biden.”

“The chances of Cienfuegos being convicted in Mexico are slim to none,” Vigil said, citing the former defense secretary’s political connections in Mexico and the country’s idolization of the military.

“This sends a very negative message to U.S. law enforcement agencies, that Donald Trump is willing to politically manipulate judicial proceedings,” he said.

Under Cienfuegos, the Mexican army was accused of frequent human rights abuses, but that was true of both his predecessors and his successor in the post. The worst scandal in Cienfuegos’ tenure involved the 2014 army killings of suspects in a grain warehouse.

The June 2014 massacre involved soldiers who killed 22 suspects at the warehouse in the town of Tlatlaya. While some died in an initial shootout with the army patrol — in which one soldier was wounded — a human rights investigation later showed that at least eight and perhaps as many as a dozen suspects were executed after they surrendered.

Barr said in a joint statement with Mexican Attorney General Alejandro Gertz Manero that the U.S. Justice Department had made the decision to drop the U.S. case in recognition “of the strong law enforcement partnership between Mexico and the United States, and in the interests of demonstrating our united front against all forms of criminality.”

The Justice Department said it has provided Mexico with evidence collected in the case.