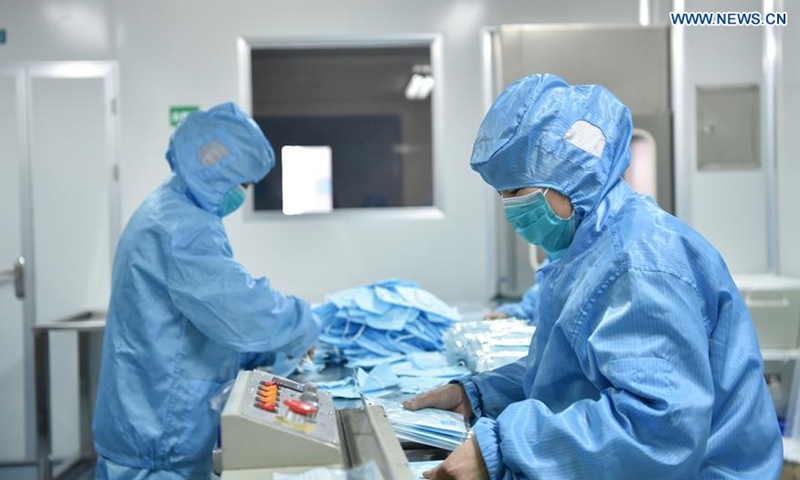 Chinese mask producers and experts on Sunday slammed recent dumping allegations by some US media outlets and politicians against Chinese-produced masks, saying that such claims are groundless and ungrateful.

Chinese masks are more affordable because of a complete and advanced supply chain in China and effective cost controls by companies in stark contrast to high-cost production in the US, they noted, adding that mask exports to the US are primarily handled by US importers and middlemen not Chinese producers.

By accusing Chinese firms of dumping masks in the US market, these US media outlets and politicians are "burning down a bridge after crossing it" given China's massive contribution to the global fight against the COVID-19 epidemic, including in the US, industry insiders and experts said.

Some US industry executives and members of Congress have accused China of dumping, noting that many imported masks are priced so low - sometimes one-tenth of what US factories charge for comparable products - that there is little chance for US companies to survive, the New York Times reported on Saturday.

Chinese industry insiders refuted such claims, saying that Chinese suppliers have been big contributors to the US epidemic prevention work with the timely delivery of preventive items, and the affordable prices reflect multiple factors for which the Chinese producers should not be blamed.

Gao Lingyun, an expert at the Chinese Academy of Social Sciences in Beijing, described the US claims as being like "burning down a bridge after crossing it."

"In the past, the US did not have the capacity for large-scale automated mask production. However, Chinese-made masks, which are affordable and of good quality, were exported to the US, helping the country a lot in the prevention and control of the epidemic," said Gao.

The US actually promoted mask imports by removing tariffs on the product, according to Gao.

The allegations by some US businesses, politicians and media organizations also showed that they may be ignorant of China's mask production industry and export channels, industry insiders said.

"The prices of Chinese-produced masks are the same as in the US and everywhere around the world, and Chinese mask producers have been very competitive, without any government subsidies," Bai Yu, president of the Medical Appliances Branch of the China Medical Pharmaceutical Material Association, told the Global Times on Sunday.

Bai said that prices of China-produced masks are lower because of advanced supply chains, which facilitate effective cost controls, and even US mask companies chose to build their factories in China before exporting the products to the US.

A manager with a large mask production company told the Global Times on Sunday that the US inquiries have jumped since last year, with some middlemen asking for tens of millions of masks, which is a significant boost compared with the time before US President Joe Biden came to office.

"We have expanded production lines with high levels of automation to meet the strong needs of epidemic-hit countries, including the US," said the manager, noting that orders have been piled up for months.

However, he said that it is very discouraging to export to the US while being accused of "dumping," simply because his company is doing well with cost controls.

"We are still making profits, and if the middlemen in the US intend to lower the price, then it would be their decision, not ours," said the manager, noting that in addition to the US, the plant is also busy with orders from other markets including India, where the demand for protective gear remains strong.

Bai also said that instead of directly exporting to the US market, Chinese mask manufacturers normally sell their products to importers or middlemen, who then sell them in the market at their preferred prices.

"Mask supply far exceeds demand these days in the global spectrum. When the market crashed, some American importers sold at low prices, but it had nothing to do with our manufacturers," said Bai.

Experts said that the dumping claims by some US politicians and media organizations are not only groundless but ungrateful.

Among them, the US snapped up around 40 billion masks, accounting for 17.6 percent, or about 120 Chinese masks for every American.

The US is heavily reliant on medical supplies made in China, a major strategic and trade rival, something that has been highlighted in the pandemic, in which the US has been the worst-affected country, the Straits Times reported.

Instead of blaming China over low prices, experts suggested that US businesses should reflect on their high prices.

"US-produced masks are so expensive because of the high costs of labor and the whole supply chain," said Bai, noting that because of China's supply chain advantages, many US mask producers chose China for building factories.

"This is also a reflection of the fact that even if the US wants to return to being a manufacturing power, it won't happen overnight," said Bai.