WORLD US embassy in Kabul locks down over surging COVID cases

US embassy in Kabul locks down over surging COVID cases 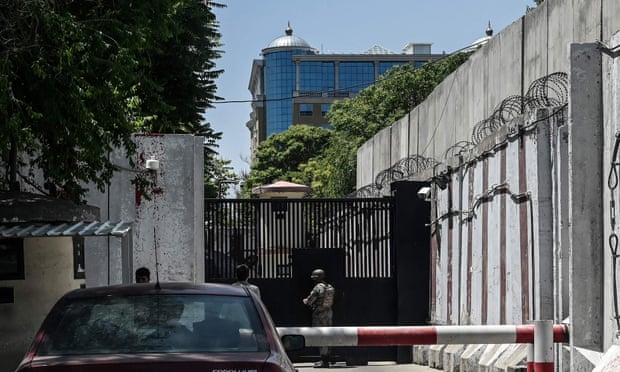 The memo said 95% of the COVID cases were among staff who were unvaccinated or only partially vaccinated. It said vaccines were available and urged staff to get the jab. (Photo: AFP)

The US embassy in Kabul on Thursday ordered strict confinement of personnel over a surge in Covid cases at a mission already under pressure ahead of the US military withdrawal from Afghanistan.

A notice sent by embassy management said that 114 people at the sprawling and heavily guarded mission have contracted Covid-19 amid a third wave in Afghanistan and one has died, with several others medically evacuated.

The embassy said it was confining all staff to their quarters except to get food or to exercise or relax alone, with all team sports and most indoor meetings prohibited.

"Failure to abide by the mission's Covid policies will result in consequences up to and including removal from post on the next available flight," the notice said.

It also encouraged vaccination. It said that 95 percent of the cases were among individuals who were not fully vaccinated.

Vaccination had already been prevalent but not universal at the embassy.

The notice said that more than 90 percent of Afghan or other non-US staff at the embassy have received vaccine doses.

The association called on the State Department to require vaccinations of all employees of US embassies around the world, including non-US citizens, unless they have medical reasons or religious objections.

Some US health care providers have required vaccinations but the issue has become politically fraught inside the United States, with far-right figures alleging government overreach.

State Department spokesman Ned Price said all employees were encouraged to be vaccinated but that there was no requirement.

"We do expect that normal embassy operations will resume once embassy leadership is confident the chain of transmission has been broken," Price told reporters.

The State Department in April ordered the departure of non-essential staff from Afghanistan amid concern over rising violence and threats in Kabul.

The unrest comes amid fears of Taliban gains after Biden ordered a withdrawal of all troops by September 11, ending a 20-year military involvement that has been the longest in US history.

Life has been returning to normal in the United States after widespread vaccination but cases have recently spiked in Afghanistan, although officially the death toll from Covid is in the low thousands, much lower than the United States's nearly 600,000 dead.

The United States earlier this month announced $266 million in aid to Afghanistan, mostly to tackle Covid.