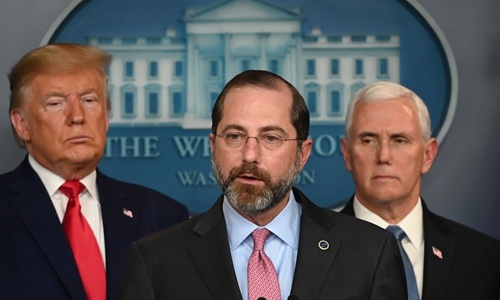 Health and Human Services Secretary Alex Azar (center) speaks during a press conference on the COVID-19 outbreak as US President Donald Trump (left) and US Vice President Mike Pence look on at the White House in Washington, DC on Sunday. (Photo: AFP)

US President Donald Trump on Friday declared a national emergency over the coronavirus pandemic, which some analysts believe is an overdue but first step of the US as uncertainties loom large; while others see it as a passive move made by Trump for the sake of his re-election campaign.

Trump invoked the 1988 Stafford Act, the statutory authority for “most federal disaster response activities.” The declaration frees up to $50 billion in federal resources and sets the Federal Emergency Management Agency in motion.

Infected cases of coronavirus in the US have climbed past 2,100 and the death toll has risen to 48, according to US media reports.

Will the emergency declaration work?

As the coronavirus outbreak grips the US, there has been growing criticism for the absence of leadership from Trump and his administration. Trump disbanded in May 2008 the pandemic response unit and attempted to slash funding for the Centers for Disease Control and Prevention. His inaction has also slowed testing for the coronavirus, a critical safety measure where the US has lagged behind other countries.

Wang Jiangyu, a professor of law at the City University in Hong Kong, believes by declaring a national emergency, which literally means a nationwide mobilization, the US has taken a key step in its fighting against the pandemic.

“Under a democratic system, politicians tend not to hold responsibilities or set restrictions on people’s movement. But now the pressure has come,” Wang told the Global Times Saturday.

Trump has invoked the Stafford Act on previous instances like the wildfires in California and hurricane in Florida to assemble federal response and provide states with financial support.

The act has been used in the past to deal with medical disaster as well. Bill Clinton made an emergency declaration in 2000 to respond to the spread of the West Nile virus in New York and New Jersey.

The declaration of a national emergency this time will make more federal funds available along with supplies, personnel, and other support, added Wang.

Wang noted the US’ nationwide mobilization is not comparable to the measures of the Chinese government but is only a contrast to the previous reluctant attitude of the Trump administration.

Wang warned despite the crucial first step, more difficulties lie ahead for the US, as testing capacity is far from enough to meet the demand and get a full picture of the severity of the pandemic in the US.

The Trump administration said Friday it would set up drive-through testing, launch a website to help Americans find a test center, and partner with private firms to expedite the availability of tests in the market.

As the US scrambles to catch up with overwhelming demand for enhancing testing capacity, nagging concerns also arise as to whether Americans can afford medical expenses for diagnosis and treatment. Rep. Katie Porter (D-CA) tweeted one test would cost a citizen an estimated  $1,331 minimum.

“Given the large sum of money needed, the free testing is a test to the Trump administration’s resolve and action power in combating the coronavirus,” Zhang Jiadong, a professor at the Center for American Studies at Fudan University, told the Global Times Saturday.

At the same press conference where Trump declared the national emergency, he said the data shared by China "has been helpful," adding that numbers in China are looking good and the two countries have been working closely to combat the coronavirus.

Zhang Tengjun, an assistant research fellow at the China Institute of International Studies, told the Global Times Saturday there is huge room for China-US cooperation, especially at the forefront of drug and vaccine research.

However, Zhang Tengjun noted the current political climate and lack of mutual trust will impede such cooperation.

Since the coronavirus outbreak in China, some in the Trump administration has escalated its drumbeat against China.

“It requires both sides to start from zero and adopt a sincere attitude toward cooperation. After all, the public health issue concerns the interest of both sides,” Zhang said.

Wang from Hong Kong’s City University echoed similar views, saying with Europe and the US becoming the epicenter of the global outbreak, cooperation is mainstream and the much needed objective.