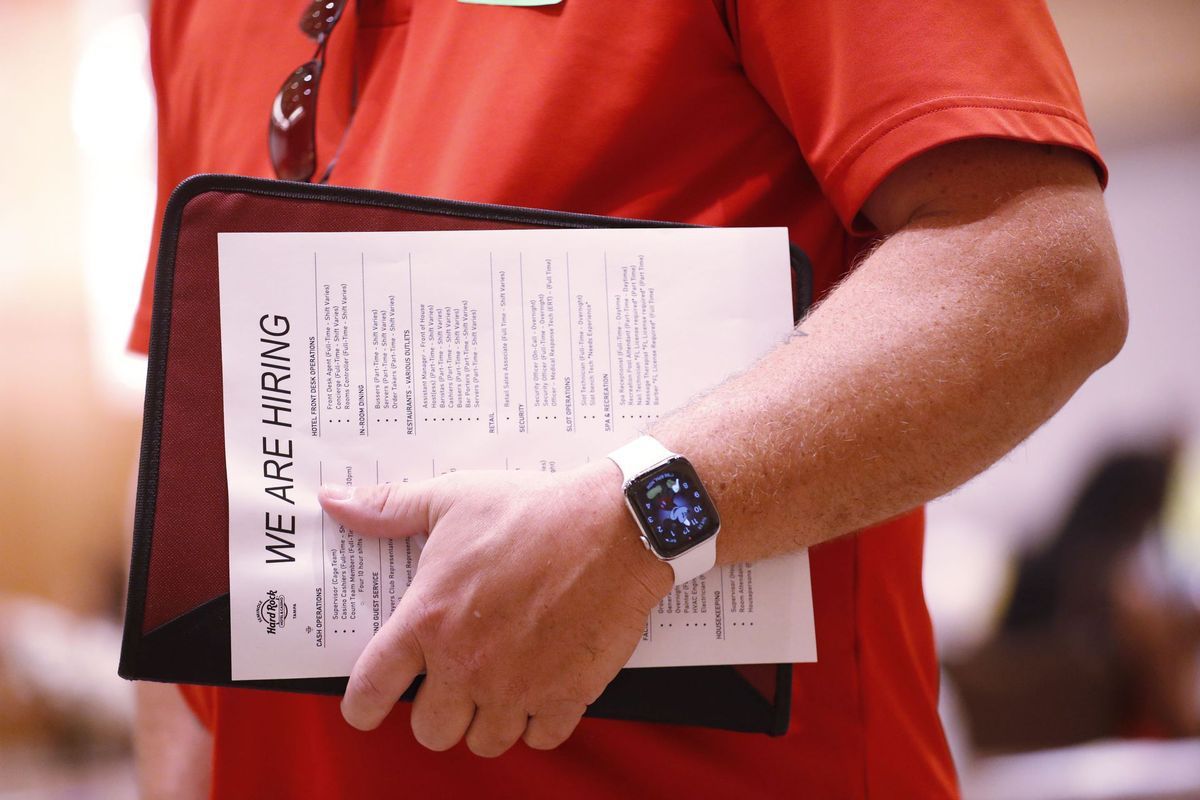 Florida residents attend a job fair seeking employment at the Seminole Hard Rock Casino on May 25, 2021 in Tampa, Florida. [Photo/Agencies]

While more than 9 million Americans remain unemployed, US employers are trying virtually anything from giving hiring bonuses and education benefits to families of new employees to the use of machines to fill job openings that have soared to a record level.

Openings climbed to 9.3 million during April, the highest since 2000, underscoring the strong labor demand as the economy rapidly recovered from the pandemic, the Labor Department said in its monthly Job Openings and Labor Turnover Survey (JOLTS) report on Tuesday.

Employers added 559,000 jobs in May, the Labor Department reported June 4, falling short of many economists' predictions of job growth of around 1 million and reflecting businesses' difficulties filling open jobs as potential workers remain on the sidelines. The unemployment rate fell to 5.8 percent, the first time it has dropped below 6 percent since the pandemic started.

A child care shortage, continuing fear about the pandemic, low wages for many jobs and enhanced federal government unemployment benefit of $300 a week on top of a state's maximum weekly benefit have kept some Americans from returning to the labor force, according to surveys.

Some who are out of work don't have the skills needed for jobs that are available or are unwilling to switch to a new career, while others have had trouble getting hired at a level comparable to their previous positions.

And then there is working at home, which millions did during the pandemic, and many don't want to give up.

Julia Pollak, a labor economist at the online jobs site ZipRecruiter, said more than half of job-seekers want to work remotely, while only 10 percent of employers are offering that option.

"It's probably going to be a bumpy ride from here till September," Rubeela Farooqi, chief US economist at High Frequency Economics, told The New York Times.

Meanwhile, the labor shortage is being felt virtually everywhere.

Nearly half of the small-business owners surveyed by the National Federation of Independent Business, a trade group, in May said they were struggling to fill openings. They are facing competition for workers from larger companies that offer better benefits, and even those companies face competition from yet bigger companies.

"Businesses are champing at the bit to grow and are moving faster than applicants are willing to move," said Steve Lucas, CEO of iCIMS Inc, a cloud-based recruiting platform with 4,000 large firms such as Target Corp, CVS Health Corp and Ford Motor Co as customers.

Pilgrim's Pride, one of the largest chicken producers in the US, expects to pay out more than $40 million this year to retain workers and compete for new ones, CEO Fabio Sandri told The Wall Street Journal.

The leisure and hospitality sector was the hardest hit by the pandemic and faces the largest job shortfall, according to an analysis by the Economic Policy Institute.

Some employers have been offering bonuses, pay raises and adding benefits like health insurance to lure new employees and retain existing ones.

The restaurant Applebee's is seeking to hire 10,000 people this summer and announced last month that it would give vouchers for a free appetizer to anyone who scheduled an interview.

Hoping for 10,000 applicants, the restaurant chain got 40,000 as a result of the offer, John Cywinski, Applebee's president told The New York Times.

"Our No. 1-selling category is appetizers, so we decided to offer an app for an app," Cywinski said. "I've got guests coming back in droves, but I don't have all the team members I'd like."

Burrito chain Chipotle announced last month that it would increase worker pay to an average of $15 per hour by the end of June in a bid to hire 20,000 new employees ahead of the summer.

Chipotle also said it will offer a $200 employee referral bonus for crew members and a $750 referral bonus for general managers. Chipotle said it is opening an additional 200 restaurants this year, which compounds its greater need for workers.

On Tuesday, Chipotle announced it was raising its menu prices by up to 4 percent to cover the costs of the higher wages for employees.