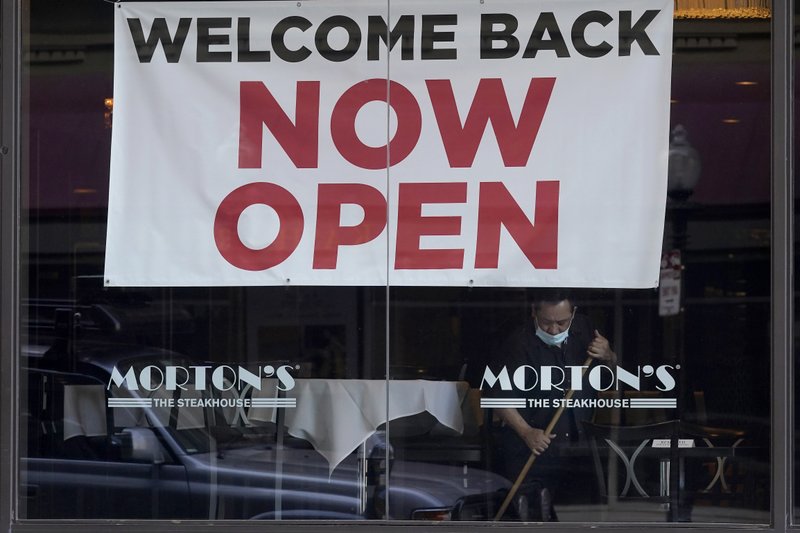 In this March 4, 2021, file photo, a sign reading "Welcome Back Now Open" is posted on the window of a Morton's Steakhouse restaurant as a man works inside during the coronavirus pandemic in San Francisco. California lost close to 70,000 jobs in January. (File photo: AP)

New applications for unemployment benefits in the United States remained high one year into the Covid-19 pandemic, government data said on Thursday, even as the country rolls out vaccines and the economy gets another round of stimulus.

The Labor Department reported 770,000 new seasonally adjusted claims for jobless benefits were made in the week ended March 13, an increase of 45,000 from the previous week's upwardly revised level.

It was also the 52nd straight week claims were above the worst level seen during the 2008-2010 global financial crisis, the last time the United States faced mass unemployment.

Claims filed under a special program for freelance workers not normally eligible decreased to 282,394, not seasonally adjusted, a drop of nearly 200,000 mostly attributable to a decline in filings in Ohio.

In total, near one million people filed unemployment aid applications last week, and more than 18.2 million were receiving aid under all programs as of the week ended February 27, a sign that the employment crisis caused by the pandemic continues.

Nancy Vanden Houten of Oxford Economics said the latest claims data justifies the Federal Reserve's decision on Wednesday to sustain the easy money policies it rolled out during the pandemic.

"The elevated level of claims -- still higher than the global financial crisis peak –- underscores why the Fed will be extremely patient before making a policy change and not act preemptively," she said in a note.

Jobless claims spiked into the millions after states ordered business restrictions to stop Covid-19, reaching a peak of more than 6.8 million new filings on the week ended March 28, 2020, before declining.

They've remained at an elevated rate ever since, oscillating in recent months and never dropping below the weekly peak of 665,000 seen in the global financial crisis.

President Joe Biden last week signed his $1.9 trillion relief package aimed at turning the economy around, the effects of which could be seen in forthcoming claims.

Rubeela Farooqi of High Frequency Economics said the stimulus combined with states' and cities' efforts to get businesses opened again could push new claim filings down and set the stage for a recovery.

"As businesses return to full capacity, job and income prospects will improve and combined with fiscal support, will provide a powerful lift to the economy," she said.