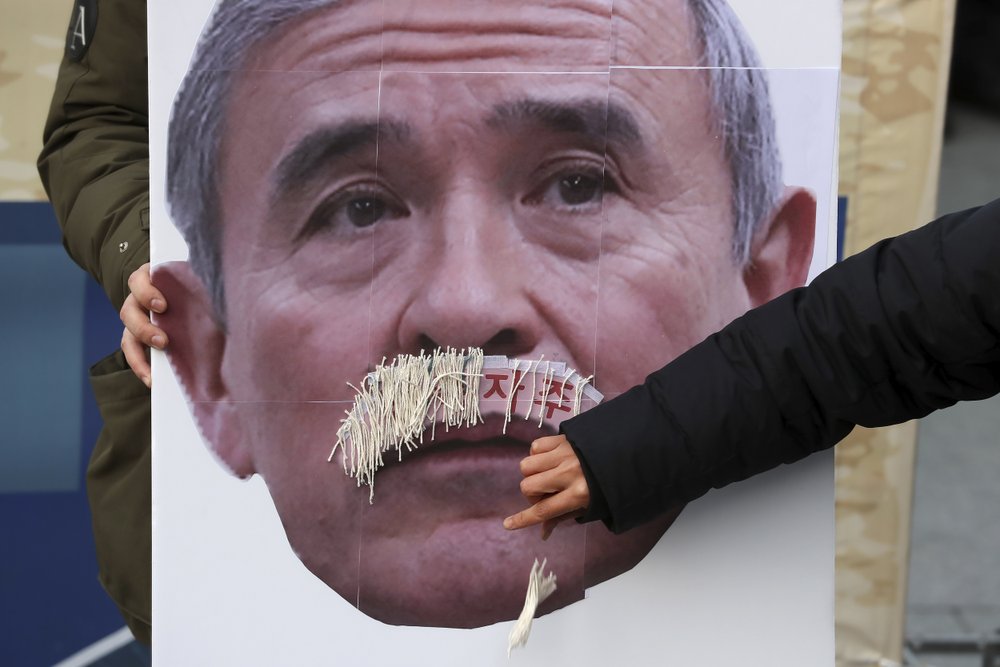 In this Dec. 13, 2019, photo, a protester plucks face mustache from a picture of U.S. Ambassador to South Korea Harry Harris during a rally to denounce the United States' policies against North Korea near the U.S. embassy in Seoul, (Photo: AP)

The U.S. ambassador to South Korea has some unusual explanations for the harsh criticism he’s faced in his host country. His mustache, maybe? Or a Japanese ancestry that raises unpleasant reminders of Japan’s former colonial domination of Korea?

Many South Koreans, however, have a more straight-forward explanation for Harry Harris’ struggle to win hearts and minds in Seoul, and it’s got more to do with an outspoken manner that they see as undiplomatic and rude.

Since arriving in Seoul in July 2018, Harris, a retired navy admiral born to a Japanese mother and an American navy officer, has been the focus of keen attention because of his military and ethnic background. The 63-year-old former U.S. Pacific Command chief has sometimes drawn criticism from those who take issue with his manner when dealing with South Koreans.

His mustache has become the subject of ribbing online, with jokes made about how it resembles those of Japanese colonial masters, who brutally occupied the Korean Peninsula from 1910-45. But there is more serious concern that the discord could widen a growing rift in Seoul’s relations with Washington at a time when diplomacy with rival North Korea seem in danger of imploding.

Harris recently said his appearance and ethnicity have been a source of his criticism in South Korea.

“My mustache, for some reason, has become a point of some fascination here,” Harris told a group of foreign reporters in Seoul last week. “I have been criticized in the media here, especially in social media, because of my ethnic background, because I am a Japanese-American.”

It’s not the first time a U.S. ambassador in South Korea has been in the news for things other than diplomacy. In 2015, former Ambassador Mark Lippert was slashed in the face and arm by an anti-American activist.

But unlike Lippert, Harris has repeatedly irked many South Koreans since President Donald Trump sent him here.

After meeting Harris in November, Lee Hye-hoon, then chairwoman of the South Korean parliament’s intelligence committee, said that the ambassador repeated about 20 times Trump’s calls for Seoul to drastically increase its financial contribution to U.S. troop deployment in the South.

In recent months, four students were arrested after they broke into Harris’ Seoul residence during an anti-U.S. rally. A mock mustache was plucked from his picture at another demonstration.

Harris said his mustache has nothing to do with his Japanese background and that he started growing it only to mark the start of his career as a diplomat.

“To those people, I say that you are cherry-picking history,” Harris said, adding that some Korean independence fighters also had a mustache.

Harris said he understands the historical animosity that exists between Japan and South Korea.

Kevin Gray, a professor of International Relations at the University of Sussex in the U.K., tweeted Friday that “Koreans’ reaction to Harris’ mustache is vastly exaggerated.”

A Monday editorial from the Korea Times said that “the point is not his mustache.”

“South Koreans would not have cared that much about his mustache if he was a ‘normal’ ambassador,” the editorial said.

Most surveys show a majority of South Koreans support the U.S. military presence in South Korea as deterrence against potential North Korean aggression, but there is a small but determined anti-U.S. network.

South Korean media have often compared Harris with his popular predecessor Lippert. Images of Lippert bleeding after the 2015 knife attack shocked many South Koreans and triggered an outpouring of public sympathy. The attack during a breakfast forum left deep gashes on Lippert’s face and arm and required five days of hospitalization.

While leaving a Seoul hospital, Lippert inspired many by saying in Korean: “The ground hardens after rain. Let’s go together.”

When asked by reporters about Moon saying he may push for individual tourism to North Korea because it won’t violate U.S.-led international sanctions, Harris stressed the need for South Korea to consult with the United States.

Those comments added to criticism of Harris, with ruling party lawmaker Song Young-gil comparing him to a Japanese governor general.

Harris’ troubles may also be linked to growing unease between South Korea and the United States.

The U.S. desire to enforce tough sanctions on North Korea doesn’t fit with the dovish Moon’s push to get sanction exemptions and restart joint rapprochement projects with North Korea. Trump’s demands for a large increase in Seoul’s payment for the U.S. military deployment prompted many South Koreans to question whether the United States is still a trustworthy ally.

“Rather than address the sources of these frustrations, some South Koreans have directed their ire at an American admiral-turned-diplomat of Japanese heritage,” said Leif-Eric Easley, associate professor of international studies at Ewha Womans University in Seoul. “Unfortunately, Seoul faces political and diplomatic decisions that are much tougher than opting for a clean shave.”