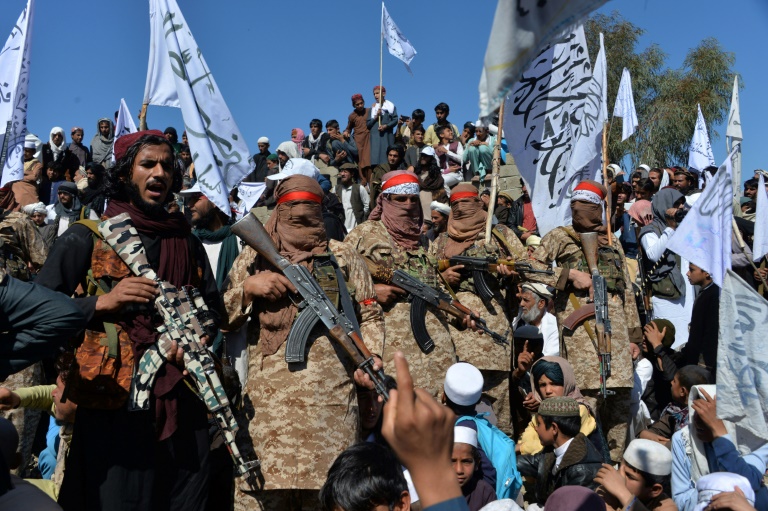 Afghan Taliban militants and villagers attend a gathering as they celebrate the peace deal and their victory in the Afghan conflict on US in Afghanistan, in Alingar district of Laghman Province on March 2, 2020. (Photo: AFP)

The Afghan government and the Taliban on Sunday held their first discussion on arranging prisoner exchanges, a key step in a broader push for peace, the US special envoy for Afghanistan said on Twitter.

He had said on Wednesday that it was "urgent" to quickly conclude plans for such exchanges -- as called for in a historic US pact with the Taliban -- as the coronavirus pandemic was complicating diplomatic contacts.

The agreement, signed by Khalilzad and a senior Taliban official on February 29 in Doha, established a framework for bringing to an end America's longest war, begun after the September 11, 2001 terror attacks.

It called notably for the liberation of up to 5,000 Taliban fighters held by Kabul, and up to 1,000 members of the Afghan government forces in insurgent hands.

That was meant to take place before the start of peace talks between the government -- which was not a party to the talks that produced the Doha deal -- and the Taliban, originally set for March 10.

But the Afghan government initially balked. President Ashraf Ghani was reportedly furious over the demand for prisoner releases, saying only the government could authorize such a step.

He eventually did consent to a plan for gradual prisoner releases but conditioned it on a reduction in violence.

"We want guarantees that they will not return to fighting," Javid Faisal, a spokesman for Afghanistan's National Security Council, told AFP at the time.

The Taliban in turn rejected that proposal, saying its agreement with Washington called for all 5,000 prisoners to be freed before inter-Afghan talks could begin.

Taliban leaders have said they are ready for the next phase of the peace process, but would not meet with government officials until their prisoners are free.

A few days later, following intensive behind-the-scenes talks, Ghani announced that the authorities would free 1,500 insurgents as a "gesture of goodwill," with plans to free another 3,500 prisoners after the talks are under way.

The Doha accord also calls for the gradual withdrawal of American and other foreign troops over a 14-month period -- the singular focus of the US diplomatic efforts. The first phase of that withdrawal has already begun.

In exchange, the Taliban committed to continue fighting against terrorist groups like Al Qaeda and promised to negotiate for the first time with Kabul.

Since the Doha agreement was signed, insurgents have carried out dozens of attacks. Insurgents who had infiltrated a police unit in the southern province of Zabul on Friday killed at least 24 police and soldiers, officials reported.

Abdullah swore himself in as president minutes after Ghani took the oath of office.