WORLD US envoy to visit Turkey over Syria, anti-IS campaign

US envoy to visit Turkey over Syria, anti-IS campaign 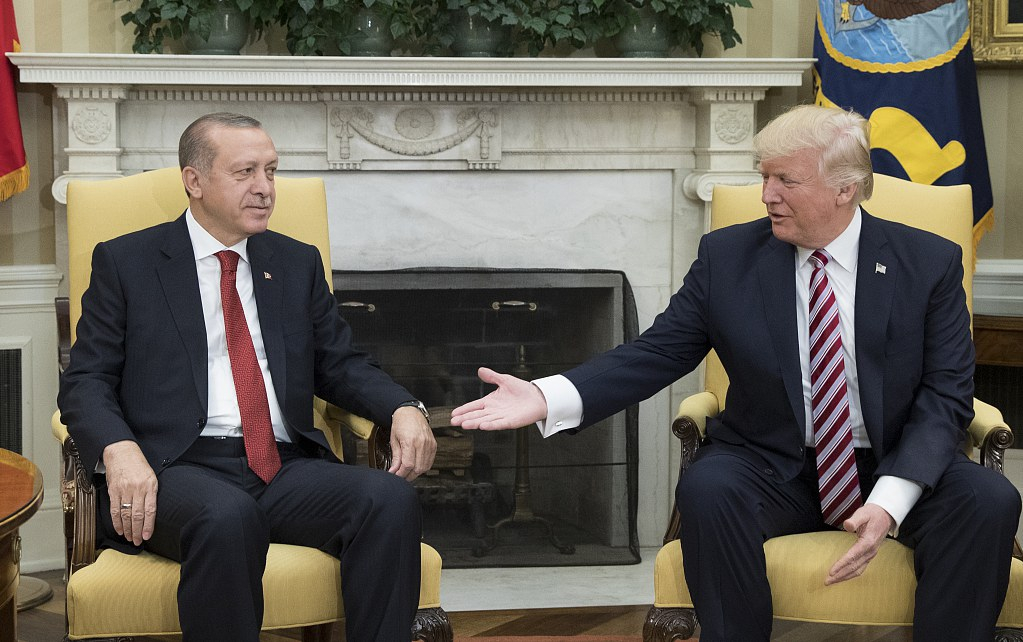 US President Donald Trump (R) extends his hand for a handshake with Turkish President Recep Tayyip Erdogan, in the Oval Office of the White House in Washington, D.C.. May 16, 2017. (Photo: VCG)

WASHINGTON, Nov. 6 (Xinhua) -- US special envoy for Syria and the anti-ISIS (the Islamic State) coalition James Jeffrey will travel to Turkey later this week, discussing the situation in northeast Syria and the fight against IS with Ankara.

Jeffrey will travel to Ankara and Istanbul on Nov. 8 and 9, when he will hold meetings with senior Turkish officials and members of the Syrian opposition, US State Department said in a statement Wednesday.

Jeffrey, who leads an interagency delegation, will discuss issues including the current situation in northeast Syria, implementation of UN Security Council Resolution 2254, and efforts to ensure an enduring defeat of the IS, according to the statement.

Jeffrey's upcoming visit to Turkey came at a delicate moment of bilateral ties between Washington and Ankara. Russian Defense Ministry reported on Sunday that US troops came under attack from Turkish-backed forces near Tel Tamir in northeast Syria.

In addition, the US House of Representatives last week overwhelmingly approved two bills highly offending for Ankara. One officially recognizes the mass killings of Ottoman Armenians during the First World War as genocide, the other aimed at slapping sanctions on Turkey over its military offensive in northern Syria.

Turkish President Recep Tayyip Erdogan signaled lately that he had second thoughts about his visit to the United States scheduled next week after the US legislative adopted these moves against Ankara.