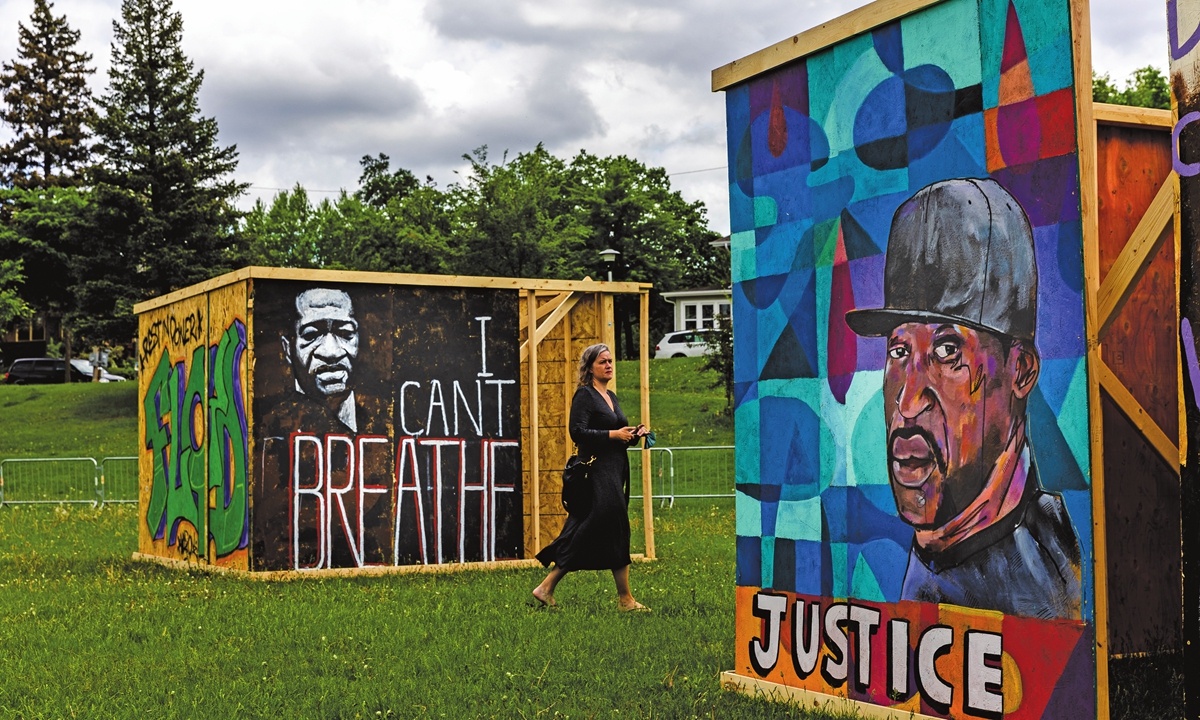 A visitor attends the free public art exhibit Justice for George: Messages from the People at Phelps Field Park near George Floyd Memorial Square in Minneapolis, Minnesota, the US on Saturday. (Photo: AFP)

"I can't breathe." This was among the last words of George Floyd, an unarmed black man suffocated to death by a white US police officer on May 25, 2020.

But one year after Floyd's death, US society has not seen a turning point toward a better situation. Many US ethnic minorities are still living in discrimination and inequality. Ethnic minorities, especially African Americans, still "can't breathe."

Some US media used to dub Floyd "the Rosa Parks of our time." Rosa Parks was an American activist in the civil rights movement in the 1950s and the 1960s, best known for her pivotal role in the Montgomery bus boycott and is called "the first lady of civil rights." But unfortunately, facts have proven that Floyd's death has not caused such great an impact.

According to a new Harris poll in early May commissioned by Paradigm, a diversity consultancy, nearly 7 in 10 Americans still think racial injustice is a problem. Many American people have asked for changes to police violence against African Americans, but the current legislative activities seem to have stalled.

Under pressure from the COVID-19 epidemic and economic recovery, the overall domestic situation in the US has not improved significantly over the past year. Under such circumstances, racial and social conflicts in the US will continue to intensify.

"Racism is a deep-rooted problem in US society. It did not arise overnight and will not change significantly because of the change of administration, unless the Biden administration is willing to launch a huge social revolution to resolve the problem. But this requires huge political resources and great political determination. Neither party is prepared for this, nor do they have enough will," Zhang Tengjun, an assistant research fellow at the China Institute of International Studies, told the Global Times on Monday.

In April, Derek Chauvin, the former police officer who knelt on Floyd's neck, was found guilty of murder for Floyd's death. However, this was a decision made under political pressure. The struggle of American minorities is far from over and their wounds are still hard to heal. Sixty-one percent of African Americans said they think local police treat people of color more harshly than white people, according to a new NPR/PBS NewsHour/Marist Poll in May.

It is very unlikely that Floyd will be "the Rosa Parks of our time." Nor will the effect of Floyd's death repeat the scale of the civil rights movement in the US decades ago because the current US lacks such a political and social environment. Floyd's death will only play a limited role in resolving racial discrimination in the US.

"The political polarization of the two US parties has only worsened after Biden came to power, and it is difficult for the two parties to reach a compromise on many issues. This also prevents the improvement of the overall situation in US society," Zhang said.

The US political elite lack the interest and courage to seriously eliminate grave problems in US society. Street assemblies, protests and violent protests are unable to make a fundamental impact on racial discrimination and other systematic problems in the US.

One year after Floyd's death, it seems that inequality and discrimination at all levels will further erode American society and continue to instigate social conflicts.