WORLD US, EU powers condemn Syria's use of chemical weapons

US, EU powers condemn Syria's use of chemical weapons

US Secretary of State Rex Tillerson joined his counterparts from France, Germany and Britain on Wednesday in condemning the Syrian government's use of chemical weapons against its citizens. 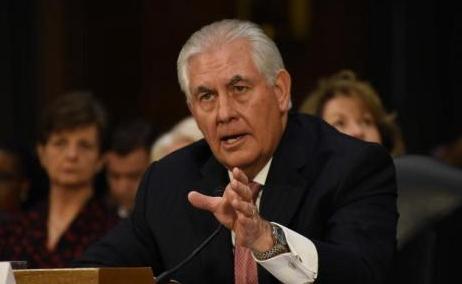 The joint statement follows a recent report from United Nations investigators which found that the regime of Syrian President Bashar al-Assad violated international law when it used sarin gas in the rebel-controlled town of Khan Sheikhoun earlier this year.

“We have full trust in the JIM's findings, its professionalism and independence. The Syrian regime violated international law, including the Chemical Weapons Convention. We condemn this heinous act and demand that the Syrian regime immediately cease any and all use of chemical weapons and finally declare to the OPCW all chemical weapons that it possesses,” the joint statement reads.

The JIM also found that ISIS was responsible for a sulfur mustard attack on the town of Um Housh in September 2016 on two consecutive days. “We agree that it is vital for the international community to continue to investigate cases where chemical weapons have been used in Syria. We therefore urge the United Nations Security Council to maintain the JIM's investigative capacity. We also call on the OPCW Executive Council to take action in response to the JIM report to send an unequivocal signal that those responsible for the use of chemical weapons will be held accountable,” the joint added.

The foreign ministers said that there is more work for the JIM to do. The OPCW has now reported that a sarin attack "more than likely" took place in Al Lataminah in Syria, just a week before the sarin attack on Khan Shaykhun. The attack it describes bears the hallmarks of the Syrian regime.

"A robust international response is now essential to hold those responsible to account, seek justice for the victims of these abhorrent attacks and to prevent such attacks from happening again. After such a report, the Security Council and all its members have a common responsibility to protect the international non-proliferation regime and live up to their previous commitments," the ministers said.