Days before Taliban forces entered the Afghan capital of Kabul, US President Joe Biden said at a news conference that he did not regret his move to withdraw troops from Afghanistan. 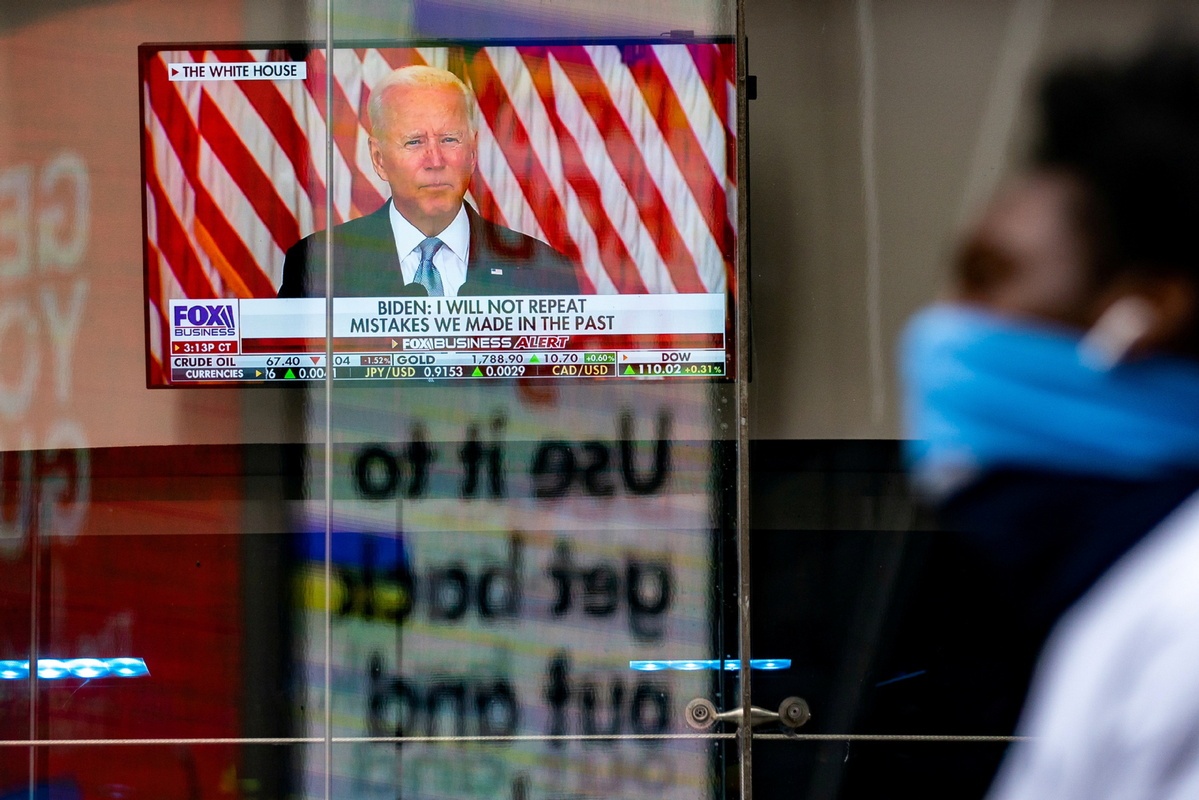 A screen displays US President Joe Biden's remarks on the crisis in Afghanistan at the Nasdaq MarketSite in Times Square in New York, Aug 16, 2021. [Photo/Agencies]

However, with the news of Afghan President Ashraf Ghani leaving the country and the images of the United States scrambling to evacuate staff and top officials from its embassy in Kabul broadcasted worldwide, US experts said Washington should regret its premature and irresponsible troop withdrawal.

"Today is the culmination of President Biden's strategic error in directing the rapid and complete withdrawal of US -- and thus all international -- forces and the failure to have done the planning necessary to prevent the resulting catastrophic collapse of the Afghan government," James B. Cunningham, nonresident senior fellow in the South Asia Center and former US ambassador to Afghanistan, said in a statement.

According to Cunningham, Biden made the wrong choice on troop withdrawal. "Biden could have declared that US withdrawal was conditioned on a genuine peace agreement and ceasefire, and focused on that objective with an extensive diplomatic effort."

In a speech in April announcing the withdrawal of US troops, Biden claimed the United States had achieved its counterterrorism objectives.

"We cannot continue the cycle of extending or expanding our military presence in Afghanistan, hoping to create the ideal conditions for our withdrawal, expecting a different result," Biden said then.

For Daniel Fried, former US National Security Council senior director, ambassador to Poland and assistant Secretary of State for Europe, even if one accepts the US administration's reasoning behind the withdrawal, "the hasty execution made disaster more likely."

"The White House looks feckless and ignorant about the situation on the ground and appears to have made its key decision based on bad assessments -- or no assessments at all," said Fried in a statement.

"I would bet a large amount that there are many at senior levels in the Biden administration who wish they could roll back the clock a few months," said Fried.

On Saturday, Biden said he had authorized the deployment of roughly 5,000 troops to Afghanistan to support a personnel drawdown. However, according to Richard Engel, chief foreign correspondent for NBC News, the new deployment did little to allay chaos on the civilian side of the airport.

"And the US has brought in thousands of troops to secure the airport. But US only focused on securing evacuation, taking place on military side of Kabul airport. Another sign of disregard for Afghans and total lack of planning," Engel tweeted.

For Irfan Nooruddin, director of the Atlantic Council's South Asia Center and professor in the School of Foreign Service at Georgetown University, the Biden administration's April announcement "might be the straw that broke the camel's back, but every US administration since 2001 is culpable and must be held accountable."

"The hollowness of American statements about democracy and human rights has long been understood by those outside the Washington bubble -- but the long-term damage to the credibility of American rhetoric from the disaster will be felt for years to come," said Nooruddin in a statement.

According to Adam Weinstein, research fellow at the Quincy Institute for Responsible Statecraft and an Afghanistan combat veteran, the real failure lies with the mistaken belief that "the United States could shape conditions and foster effective governance through the force of arms."

"The chaos that follows intervention and the chaos that follows withdrawal are rooted in the same fundamental mistake -- that the US thinks it can use its military to affect permanent social and political change in countries that it occupies," Weinstein said in a statement.