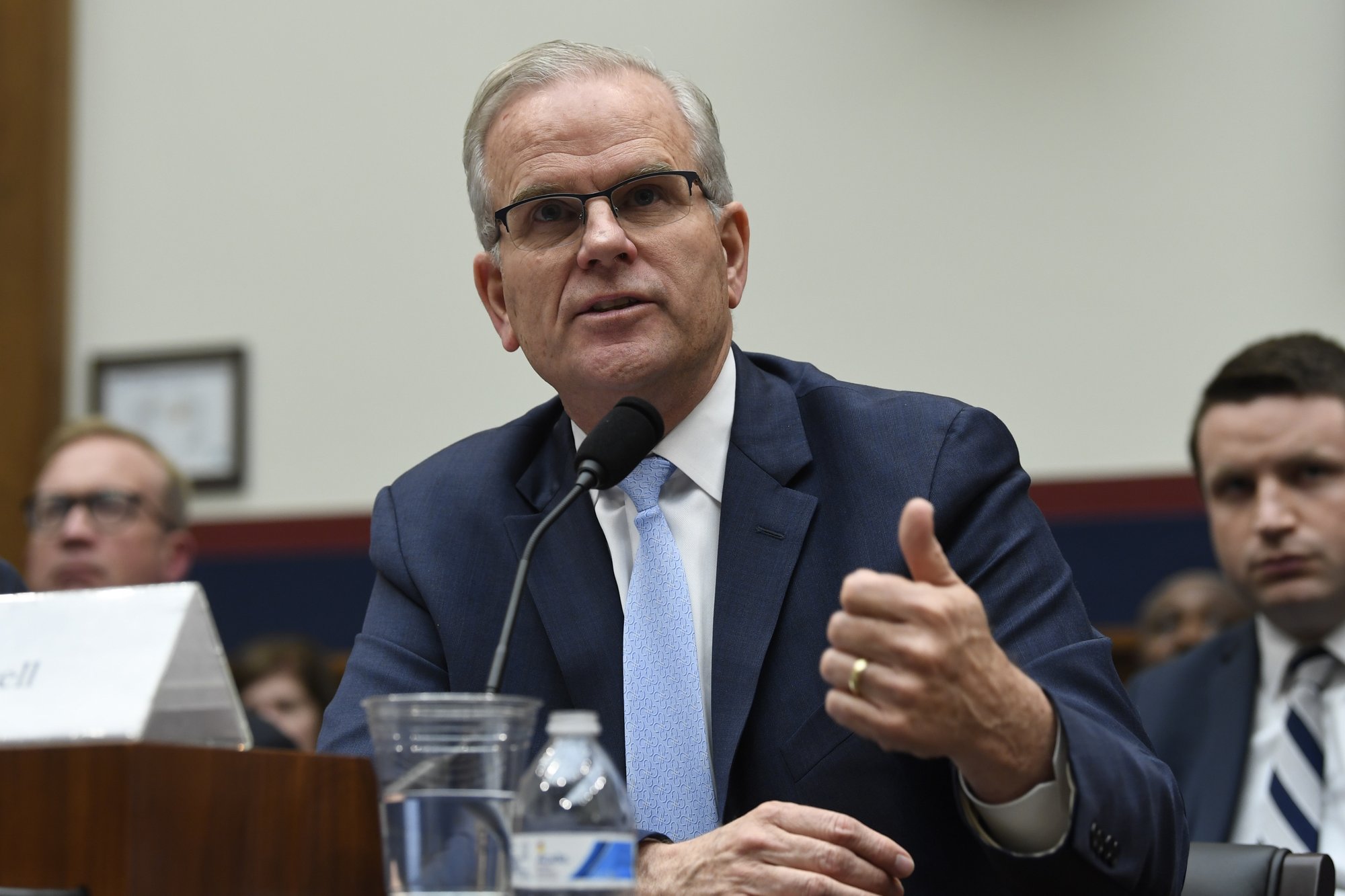 Daniel Elwell, acting administrator of the Federal Aviation Administration, testifies during a House Transportation Committee hearing on Capitol Hill in Washington, Wednesday, May 15, 2019, on the status of the Boeing 737 MAX aircraft. (Photo: AP)

The acting head of the US Federal Aviation Administration said Wednesday that Boeing should have done more to explain an automated flight-control system on its 737 Max aircraft before two deadly crashes, but he defended his agency’s safety certification of the plane and its decision not to ground the jet until other regulators around the world had already done so.

The FAA official, Daniel Elwell, said he expects Boeing to submit a fix to the plane’s flight-control software “in the next week or so.” The FAA will analyze the changes, conduct test flights and determine what additional pilot training is needed before letting the planes fly again, he said.

“In the US, the 737 Max will return to service only when the FAA’s analysis of the facts and technical data indicate that it is safe to do so,” he told members of the House aviation subcommittee.

During a two-hour hearing, lawmakers pressed Elwell on the FAA’s reliance on designated Boeing employees during the planes’ certification process and why the agency didn’t ground the planes sooner.

Rep. Dina Titus, D-Nev., told Elwell that the public believes “you were in bed with those you were supposed to be regulating, and that’s why it took so long” to ground the planes.

Other lawmakers defended Boeing and suggested that the Oct. 29 crash of a Lion Air jet off Indonesia and the March 10 crash of an Ethiopian Airlines Max were due at least partly to pilot error. A total of 346 people were killed in the crashes.

“It bothers me that we continue to tear down our system based on what has happened in two other countries,” said Rep. Sam Graves, R-Mo.

Across Capitol Hill, a Senate committee held a confirmation hearing for President Donald Trump’s choice to lead the FAA, former Delta Air Lines pilot and executive Stephen Dickson. He promised senators that he would make sure the FAA does not become captive to the industry it regulates.

House Aviation subcommittee Chairman Rick Larsen opened the hearing by declaring that, “The FAA has a credibility problem.”

Larsen, however, added a note of economic urgency to the FAA’s upcoming decision on the plane’s safety. The 737 Max is Boeing’s best-selling plane and it is built in his home state of Washington.

Larsen said Congress must help make the public feel safe about flying because “if they don’t fly, airlines don’t need to buy airplanes,” and “then there will be no jobs” in aircraft manufacturing.

DeFazio, who heads the full Transportation Committee, also said he and Larsen have been frustrated after requesting documents from Boeing to aid in the panel’s investigation.

“Boeing has yet to provide a single document,” he said. “We’ve got to get to the bottom of this.”

Boeing is already the subject of a criminal investigation by the Justice Department. Boeing customers Southwest Airlines and American Airlines and their pilot unions have received subpoenas related to that investigation; United Airlines, which also flew the Max until it was grounded in March, declined to comment, although its pilot union confirmed that it too has received a subpoena.

The Transportation Department’s inspector general and two congressional committees are looking into the FAA’s relationship with Boeing.

Elwell defended the FAA’s 2017 approval of the Max including its new automated flight-control system that can push the nose of the plane down if a single sensor detects that the plane could be nearing an aerodynamic stall.

“When I first heard of this, (I) thought that the MCAS should have been more adequately explained in the ops manual and the flight manual,” Elwell said.

He said he expects more explanation to accompany Boeing’s fix for the plane, “to make pilots more aware and respond better to an anomaly.”

Boeing is now reducing the power of MCAS to tilt the plane down, and linking the system to two sensors instead of one.

Under questioning, Elwell said Boeing should not have waited more than a year to tell FAA and airlines that another feature — a light that indicates when information from flight sensors might be unreliable — did not work.

Elwell said the light was not critical for safety — Boeing has said the same thing — although some lawmakers seemed skeptical.

The Dallas Morning News reported that American Airlines pilots pressed Boeing in November — shortly after the first Max crash — on potentially grounding the planes and pushed for a quick software fix from the plane maker.

“We don’t want to do a crappy job of fixing things, and we also don’t want to fix the wrong things,” a Boeing employee responded, according to a recording reviewed by the newspaper.

Elwell was joined at the House hearing by Robert Sumwalt, chairman of the National Transportation Safety Board. No Boeing representatives were invited to testify.

Nadia Milleron, whose daughter, Samya Stumo, was on the Ethiopian Airlines plane, was in the audience. She said FAA seems to be rushing to approve Boeing’s fixes to the Max.

Regulators, she said, should wait until the accident investigations are finished — something that could take many months. “It is possible that these planes should never go back in the air,” she added.

Milleron, whose family is suing Boeing and Ethiopian Airlines, said travelers hold the final power to ground the plane.

“The only thing that is going to stop this is the public,” Milleron said in an interview. “If the public is concerned and if the Boeing 737 Max 8 ... becomes toxic ... that’s going to make a change.”

The Senate Commerce Committee heard from Dickson, the former Delta official who, if confirmed by the full Senate, would replace Elwell. The FAA has been led by an acting administrator since January 2018.

Dickson said he would not hesitate to take enforcement action against a company regulated by the FAA.

US aviation has an enviable safety record over the past decade, Dickson said, but the industry is only as good as the last takeoff or landing.