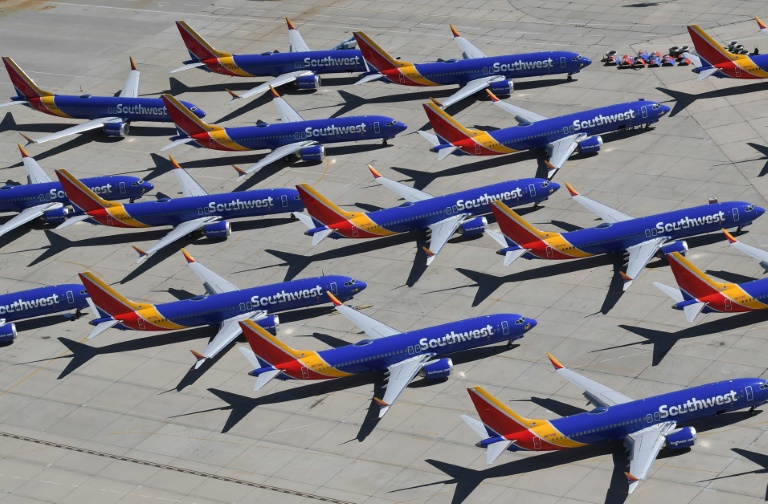 The global fleet of Boeing 737 MAX planes has been grounded after two deadly crashes, including this group of Southwest Airlines planes photographed in California in March. (Photo: AFP)

The head of the US air safety agency said on Wednesday his agency hadn't yet evaluated Boeing's patch for its 737 MAX 8 jet, ahead of a Thursday summit of global aviation regulators.

The 737 MAX was grounded following the March 10 Ethiopian Airlines crash, which together with an Indonesian Lion Air crash in October claimed 346 lives and were both blamed on faulty technology in the aircraft.

The summit in Fort Worth, Texas is expected to provide clues as to whether global aviation safety authorities will be willing to set aside any hesitation about the US Federal Aviation Administration (FAA), which was the last to ground the plane and has not yet given the green light for the 737 MAX to fly again.

In a sign of the work remaining to be done before the MAX 8 can fly again, interim FAA chief Dan Elwell said his agency has not yet received Boeing's proposed fix for the automated control system blamed in the crashes.

"We are still waiting for Boeing to formally submit the software for approval," Elwell said ahead of the summit.

"It takes as long as it takes to be right," Elwell said, saying the delay was caused by the FAA sending Boeing additional questions about its proposed fix.

However US carriers appear ready to put the plane back in the air, with American Airlines and Southwest both scheduling flights using the jet for August in the apparent hope that it will be cleared to fly then.

But before that can happen regulators "are going to want a lot of explanation," said Richard Aboulafia of the Teal Group. "We're going to learn a lot."

The FAA would prefer to have other agencies quickly follow its lead -- which previously would have been likely -- but several aviation experts think that is improbable.

Officials from the European Union and Canada said Wednesday they will not clear the 737 MAX for takeoff until their questions are answered.

"There are conditions for us to have (the 737 MAX) return to fly and that is we do our independent review," said Jagello Fayl, communications chief for the European Union Aviation Safety Agency.

Meanwhile, Transport Canada "has provided US Federal Aviation Administration and Boeing a list of questions and action items to address as part of the validation process and evaluation," Transport Canada spokeswoman Frederica Dupuis said in an email.

"Our expectation is that all data required to address these inquiries will be provided."

Dupuis said she "cannot speculate on the timelines" for approval of the 737 MAX by the FAA or Canadian officials.

The meeting comes after Boeing announced on May 16 that it had completed a software update to address a problem with the flight handling program known as the Maneuvering Characteristics Augmentation System (MCAS).

In both of the MAX crashes, the MCAS pointed the plane sharply downward based on a faulty sensor reading, hindering the pilots' effort to control the aircraft after takeoff, according to preliminary crash investigations.

China's three largest airlines have sought compensation from Boeing over the grounding and delayed further delivery of the jets, state media reported Wednesday.

A Boeing spokesman said the company does not comment on conversations with customers, but that they are providing additional information to the FAA in anticipation of a certification test flight, a key step in winning regulatory approval.

Long considered a "gold standard" internationally, the FAA's reputation has suffered amid scrutiny of the oversight process and reports it allowed Boeing to effectively self-certify some features of the 737 MAX.

US lawmakers last week once again castigated Elwell for lagging behind virtually all other regulators in grounding the planes, acting only after seeing data linking the two crashes.

Elwell meanwhile said the agency would permit the 737 MAX to resume flights "only when the FAA's analysis of the facts and technical data indicate that it is safe to do so."

Elwell said he hoped other regulators "make their un-grounding as close to ours as possible."