US President Joe Biden said Wednesday that troops would remain in Afghanistan until all Americans who wanted to leave the country were evacuated. 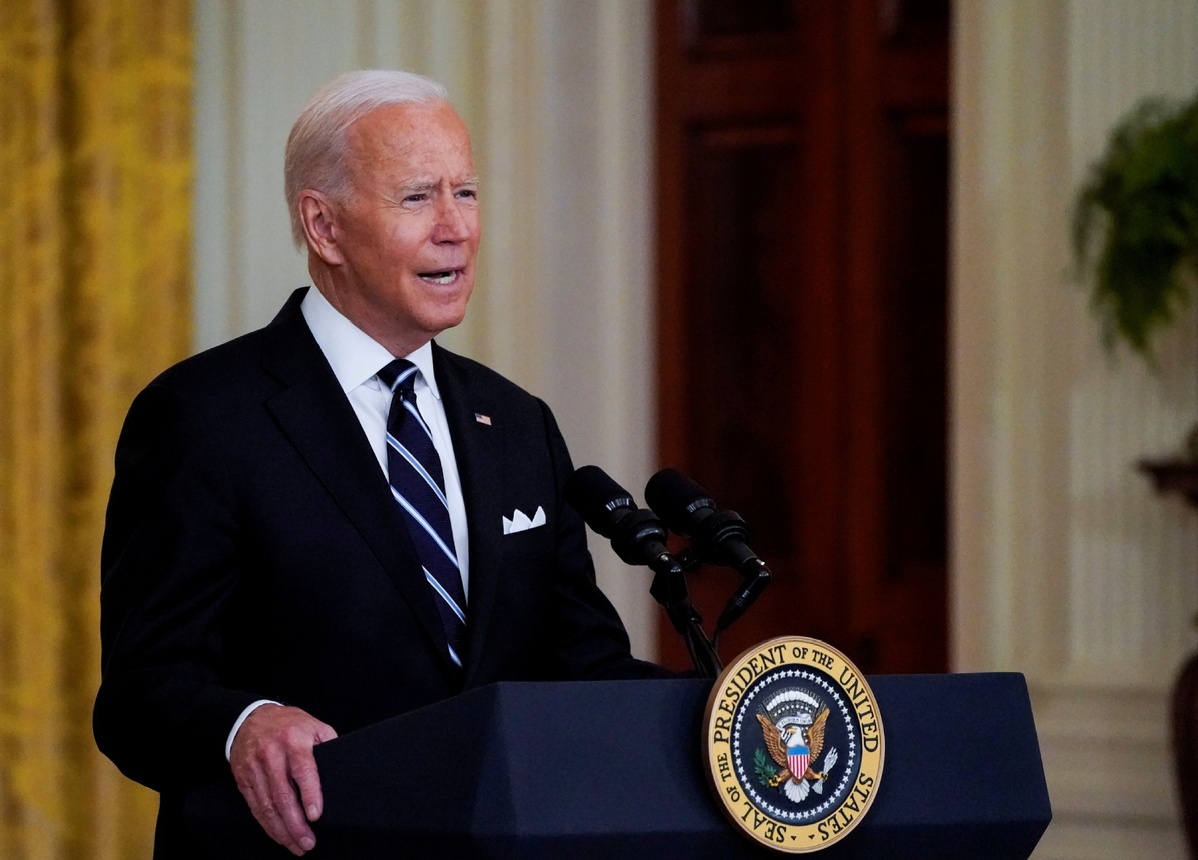 US President Joe Biden delivers remarks on the coronavirus disease (COVID-19) response and vaccination program during a speech in the East Room at the White House in Washington, Aug 18, 2021. [Photo/Agencies]

In an interview with George Stephanopolous on ABC News, Biden said the aim still was for the US military to leave the war-torn country by Aug 31.

"If we don't, we'll determine at the time who's left," Biden said, before pausing.

"And if there's American citizens left, we're going to stay until we get them all out," Biden said.

"I don't have the capability to go out and extend operations currently into Kabul," US Secretary of Defense Lloyd Austin said at a joint news conference with Army General Mark Milley, chairman of the joint chiefs of staff.

"How far do you extend into Kabul, and how long does it take to flow those forces in to be able to do that?" Austin said.

The concern about Americans being stranded has risen amid reports that Taliban checkpoints have stopped some evacuees.

Milley said forces on the ground "have capability to do other things, if necessary", but said it would be a "policy decision".

In Europe, officials have chafed at the rapid US withdrawal.

"Now this is a harsh lesson for all of us," British Conservative lawmaker Tom Tugendhat, who is chairman of the Foreign Affairs Committee in the House of Commons, told Parliament.

"We can set out a vision, clearly articulate it, for reinvigorating our European NATO partners to make sure that we are not dependent on a single ally, on the decision of a single leader, but that we can work together with Japan and Australia, with France and Germany, with partners large and small, and make sure that we hold the line together."

European Union High Representative Josep Borrell, a former Spanish politician who now leads the EU diplomatic corps, said to reporters Tuesday that "what has happened shows that Europe needs to develop this famous 'strategic autonomy' in order to be ready to face challenges that affect us eventually".

NATO Secretary General Jens Stoltenberg said on CNN's New Day on Wednesday that it "was actually politically impossible for European allies to continue in Afghanistan, given the fact that the United States has decided to end its military mission".

Ian Bremmer, director of the Eurasia Group said, "Biden is president of the United States for the American people, but the level of indifference to allies and the average citizen outside the US is starting to really grate on many that have been there with the Americans for a very long time," reported CNN.

"European leaders are questioning (the US), despite the successful EU summit and G7 meeting and all the rest of that, because many of them, if not all, wanted to stay," said David Petraeus, a retired general who commanded US forces in Afghanistan and served as CIA director, CNN reported.

Austin, a retired four-star Army general who commanded forces in Afghanistan, spoke at his first Pentagon news conference since the Taliban swept to power in Kabul on Sunday, capping a week in which the Islamic fundamentalist group captured all of the mountainous country's other major cities.

"We cannot afford to either not defend that airfield or not have an airfield that's secure, where we have hundreds or thousands of civilians that can access the airfield," Austin said, adding that talks with the Taliban were continuing to ensure safe passage for those evacuating.

"We're not close to where we want to be" in terms of the pace of the airlift, Austin said.

Stephanopoulos, in the interview, also asked Biden if the withdrawal could have been handled differently.

"No, I don't think it could have been handled in a way that, we're going to go back in hindsight and look — but the idea that somehow, there's a way to have gotten out without chaos ensuing, I don't know how that happens," Biden responded.

"So for you, that was always priced into the decision?" Stephanopoulos said.

"Yes," Biden said before adding, "Now exactly what happened, I've not priced in."

Senate Minority Leader Mitch McConnell, a Kentucky Republican, was critical of how the withdrawal unfolded.

"There are up to 15,000 Americans stranded out in the country who presumably have to beg the Taliban to let them get to the airport," he said on Fox News on Tuesday. "Not to mention the interpreters who worked with us, and other Afghans who are in danger because they cooperated with us. All of this is the aftermath of the decision first to withdraw, and to withdraw in a precipitous and incompetent way."

John Kirby, the chief Pentagon spokesman, said Wednesday that over 24 hours about 2,000 people, including 325 American citizens, had left aboard 18 flights by US Air Force C-17 transport planes.

The number of departing Air Force flights was likely to be similar in the next 24 hours, Kirby said.

"Military flights are arriving and departing consistently, and there is limited commercial flight operations, as well as some foreign-contracted flights that are coming and going," Kirby said.

Kirby said several hundred more American troops were expected to arrive at the airport by Thursday.

An Air Force unit arrived overnight that specializes in rapidly setting up and maintaining airfield operations, Kirby said. And he said Marines trained in evacuation support have continued to arrive and will assist in getting civilians onto flights.

Jake Sullivan, Biden's national security adviser, on Tuesday acknowledged reports that some civilians were meeting resistance — "being turned away or pushed back or even beaten" — as they tried to reach the Kabul airport. But he said "very large numbers" were reaching the airport and the problem of the others was being taken up with the Taliban.

A survey by Yahoo News of 1,649 US adults, conducted from Aug 16 to 18, found that while 50 percent of respondents said one month ago that they favored the decision to "withdraw all (US) combat troops from Afghanistan by the end of August", 40 percent now back that. Over the same period, opposition to Biden's plan to withdraw increased from 22 percent to 28 percent.