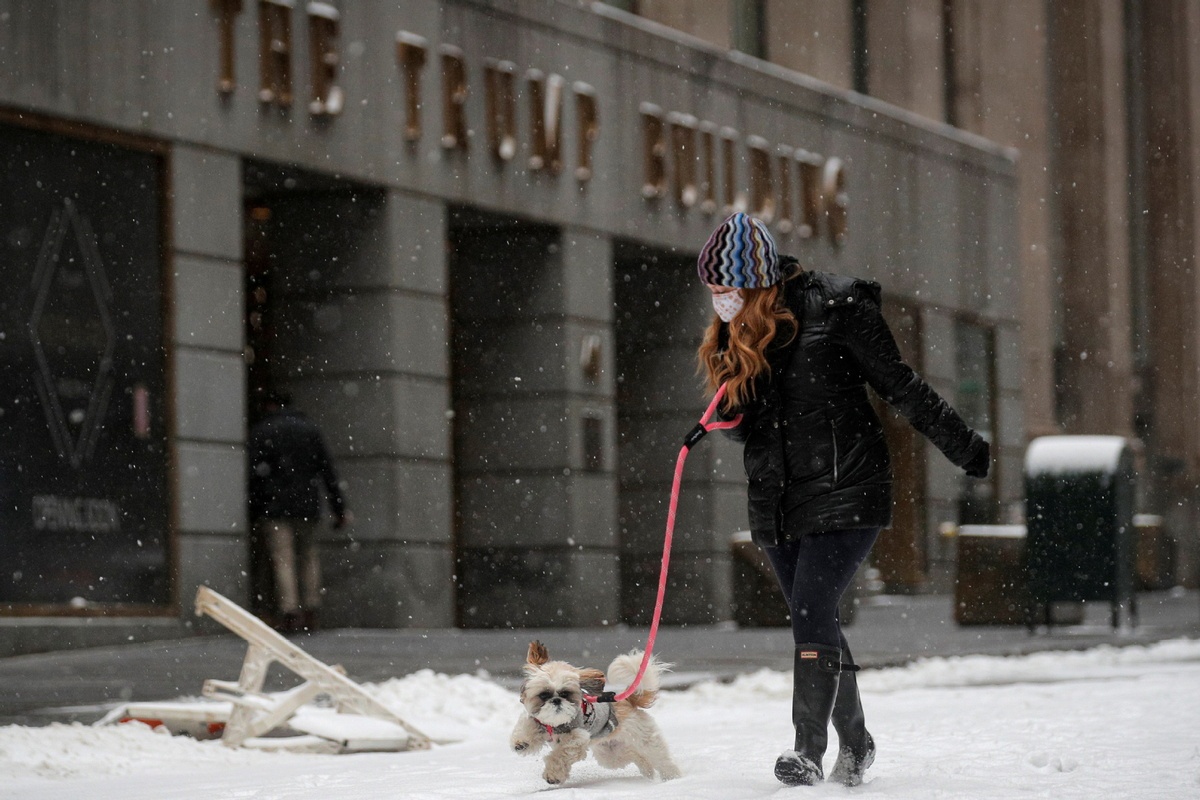 A woman walks her dog on Wall St. by the New York Stock Exchange during a snow storm in the Manhattan borough of New York, Feb 18, 2021. (Photo: Agencies)

Another winter storm was bringing more ice and snow across much of the United States on Thursday as 1.1 million people remained without power, including about 500,000 in Texas, and President Joe Biden declared states of emergency and dispatched help to states crippled by the storms and power outages.

"I've declared states of emergency, authorized FEMA (the Federal Emergency Management Agency) to provide generators and supplies, and am ready to fulfill additional requests," he wrote on Twitter.

The extreme winter weather has left at least 38 dead nationwide and nearly 72 percent of the US with snowfall.

Power outages in Texas dropped below 1 million Thursday morning, but cold in Texas could continue for days as another storm hits, and many people remained without safe drinking water and electricity.

In Texas, about 560,000 homes and businesses were still without power to heat their places Thursday morning, although down from nearly 3 million the day before.

"We will keep working around the clock until every single customer has their power back on," Dan Woodfin, the senior director of system operations of the Electric Reliability Council of Texas (ERCOT), said in a statement Thursday.

The cold weather also damaged infrastructure and water pipes, forcing officials in Houston and surrounding areas to issue an advisory to boil water before use in case of contamination.

About 13.5 million Texans are affected by water issues, said Tiffany Young, spokesperson for the Texas Commission on Environmental Quality.

"Temperatures will be dangerously cold with damage to exposed pipes and additional water main breaks expected," the National Weather Service said in a warning issued Thursday. "It's important to have a plan for how your family will stay warm tonight if you lose power."

In Austin, some hospitals were facing a loss of water pressure and heat.

"Because this is a statewide emergency situation that is also impacting other hospitals within the Austin area, no one hospital currently has the capacity to accept transport of a large number of patients," St. David's South Austin Medical Center CEO David Huffstutler said in a statement.

A major winter storm was spreading across much of the country, tracking along the Southeast coast and producing heavy snow and significant ice accumulations across the mid-Atlantic region on Thursday.

More than 320,000 homes and businesses were without power in Louisiana, Mississippi and Alabama. About 70,000 power outages persisted after an ice storm in eastern Kentucky, while nearly 67,000 were without electricity in West Virginia.

The heaviest snowfall is forecast to occur from the Appalachians of Virginia and West Virginia to northern Maryland and southern Pennsylvania, the National Weather Service said.

Farther south, "significant and disruptive" ice was expected, bringing up to half an inch of accumulation in North Carolina and southern Virginia, the Weather Service said. "The result will be dangerous travel conditions, numerous power outages and extensive tree damage.

"Record cold daily maximum and minimum temperatures are likely to transpire in the South-Central US through Saturday morning," the Weather Service said, predicting that the unusually cold temperatures will remain until the end of the workweek.

The weather caused vaccine-shipment delays this week across the country and forced some COVID-19 vaccination and testing sites in Washington DC, Maryland and Virginia to close.