WORLD US farmers voice concern over new aid, would rather ‘feed the world’

US farmers voice concern over new aid, would rather ‘feed the world’ 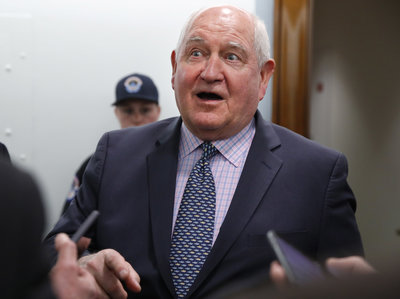 Agriculture Secretary Sonny Perdue said the emergency relief for farmers will be available in three forms while speaking with reporters on July 25, 2018. (Photo AP)

The planned mix of direct payments to farmers and ranchers who believed that they were the key constituents for US President Donald Trump and Republicans. The aid will ensure their protection as the administration pursues an aggressive course. Trump's move to slap tariffs on imports from some of America’s largest foreign buyers have prompted retaliation against US farm goods like pork, beef, soybeans, sorghum, and fruit.

The first part of the aid would provide direct payments to farmers who grow soybeans, sorghum, corn, wheat, cotton, and also to those in the pork and dairy industries.

The second part, a “food purchase and distribution program,” would use authority under USDA’s Agricultural Marketing Service to buy fruit, nuts, rice, beef, pork and dairy products from US producers for redistribution to federal nutrition assistance programs.

The third part would put resources toward finding new markets for farmers to sell their products abroad.

The administration said the program is just temporary. “This is obviously a short-term solution that will give President Trump time to work on long-term trade policy and deal to benefit agriculture as well as all sectors of the American economy,” US Agriculture Secretary Sonny Perdue told reporters.

Perdue also said the amount is in line with the roughly $11 billion in revenue damage the USDA has calculated agriculture players have suffered as a result of “illegal” retaliatory tariffs imposed by China, Canada, Mexico, the European Union and other major economies.

The aid plan would not need congressional approval, and the money would come from the Commodity Credit Corporation, a division within the cabinet that addresses prices on agriculture.

However, it is unclear whether the aid will cover many of the losses that various agriculture sectors are experiencing. According to the US Meat Export Federation, the tariffs from Mexico, just one of the nations in the trade war, will lead to more than $835 million in annual losses in the pork industry.

Some farm-state Republicans quickly dismissed the plan. “America’s farmers don’t want to be paid to lose — they want to win by feeding the world,” Sen. Ben Sasse (R-Neb.) said in a statement. “This administration’s tariffs and bailouts aren’t going to make America great again — they’re just going to make it 1929 again,” he added.

Other GOP members from farming states also spoke out strongly against the tariffs.

“This is becoming more and more like a Soviet-type of economy here: Commissars deciding who’s going to be granted waivers, commissars in the administration figuring out ho they’re going to sprinkle around benefits,” said Republican Senator Ron Johnson of Wisconsin. “I’m very exasperated. This is serious.”

The aid also doesn’t address other sectors that have been hurt by the retaliatory tariffs from the US’ largest trading partners, such as manufacturers, consumers and other industries.

“I want to know what we’re going to say to the automobile manufacturers and the petrochemical manufacturers and all the other people who are being hurt by tariffs,” said Republican Senator John Kennedy of Louisiana and later added, “you’ve got to treat everybody the same.”