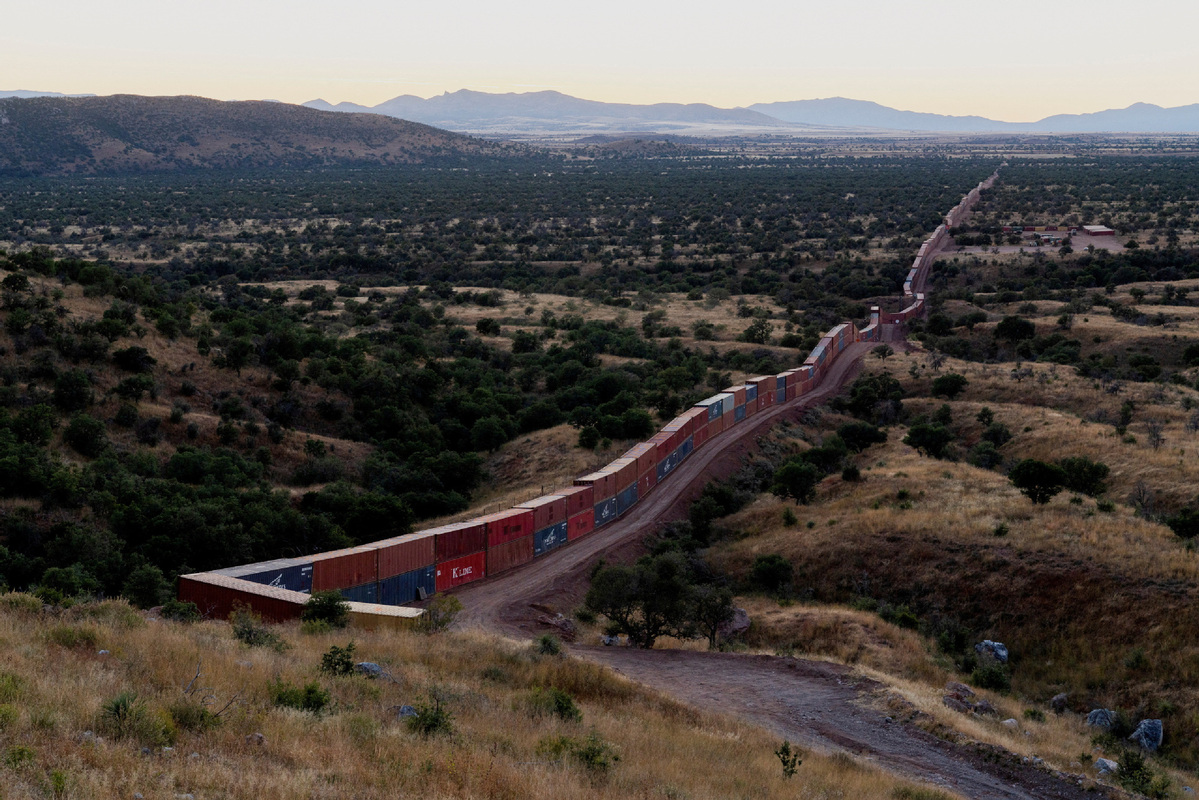 A view of shipping containers from the border wall on the frontier with Mexico in Cochise County, Arizona, US, Nov 6, 2022. (Photo: Agencies)

The US federal government is taking the state of Arizona and its top officials to court, demanding the state remove a makeshift border wall along the US-Mexico border constructed of garish shipping containers, but the outgoing Republican governor shows no signs of relenting.

The complaint against the Grand Canyon State was filed by the US Justice Department in US District Court in Arizona on Wednesday. It said the barrier's construction constitutes trespassing on federal lands and requested the containers be removed and further placement be halted.

"In particular, Arizona has entered Reclamation and Forest Service lands along the Arizona-Mexico border and installed -- and continues to install -- hundreds of double-stacked multi-ton shipping containers that damage federal lands, threaten public safety, and impede the ability of federal agencies and officials, including law enforcement personnel, to perform their official duties," it added.

The move has further escalated the fight between Arizona GOP Governor Doug Ducey and the Biden administration over border enforcement since August.

On Aug. 12, Ducey issued an executive order telling the state's Department of Emergency and Military Affairs to use shipping containers to fill 1,000-foot gaps in the border wall along Arizona's southern border with Mexico near the city of Yuma. However, Ducey's original scope for the project has mushroomed significantly.

According to Wednesday's lawsuit, the federal government has been battling with the state since then to get the containers removed. However, Arizona has refused to remove the containers and indicated that it would continue the project.

In October, the federal government sent a letter to the state regarding the issue. In response, Arizona filed a lawsuit days later to protect its temporary barrier. The US government then filed a motion last month to dismiss the lawsuit. The court has yet to rule.

The incident has gained national attention. Demonstrators, who organized the first protest on Nov. 29 and blocked access to the site, gathered again at a section of the wall near Yuma.

"What started as a small demonstration has turned into a two-week standoff," as residents and environmentalists rallied to oppose Ducey's effort to wall off sections of the US-Mexico border with shipping containers, NBC reported Tuesday.

"Twenty protesters withstood freezing temperatures over the weekend to defy the project," NBC said, adding, "recently, a volunteer bought a Christmas tree for the protest site."

On Monday, the US Department of Agriculture and Department of Interior threatened legal action regarding the shipping container barrier.

In response, Arizona's Office of the Governor sent a letter to the US Department of Justice Tuesday, saying it "stands ready to cooperate with the federal government on construction of a border wall and always has been."

The three-page note called the construction "a historic investment by the Arizona Legislature," adding that construction of the container barrier "has ceased" since previous discussions between the entities.

The note continued: "Arizona agencies and contractors stand ready to assist in the removal of the barriers, but the federal government owes it to Arizonans and all Americans to release a timeline on when the construction will begin and details about how it will secure the border while construction is underway."

The Center for Biological Diversity said Wednesday it intends to sue the governor's administration and a state contractor for allegedly violating federal law by blocking streams and washes along the southern border with the shipping containers.

"Ducey's shameful political stunt will starve the Southwest's last free-flowing river of water, further jeopardizing one of Arizona's crown jewels and an international birding mecca," Robin Silver, a co-founder of the center, said in a statement.

Ducey, a Republican, has two weeks left as governor before Katie Hobbs, a Democrat, will be sworn in on Jan. 5. Hobbs has said she opposes the border project, noting "it's a political stunt. It's a visual barrier that is not actually providing an effective barrier to entry, and I think a waste of taxpayer dollars."