WORLD US fentanyl abuse is caused by domestic reasons, not originated from China: FM

US fentanyl abuse is caused by domestic reasons, not originated from China: FM 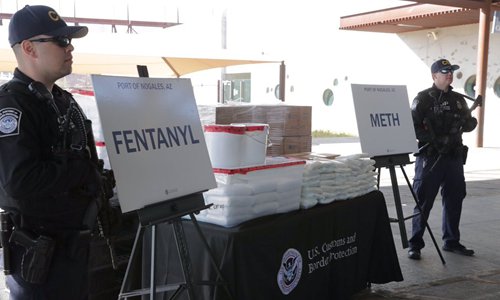 Packets of fentanyl mostly in powder form and methamphetamine, which US Customs and Border Protection say they seized from a truck crossing into Arizona from Mexico, is on display during a news conference at the Port of Nogales, Arizona, US on January 31. (Photo: VCG)

China has urged the US to make it clear that the US fentanyl abuse crisis does not originate from China and the US should stop pointing fingers at others over the matter.

Geng Shuang, spokesperson for the Chinese Foreign Ministry, made the remarks during a routine press conference on Monday, commenting on inquires related to US President Donald Trump's Friday tweet, which ordered the US express companies to reject "...all deliveries of Fentanyl from China (or anywhere else)," also claiming that "Fentanyl kills 100,000 Americans a year."

Fentanyl is a chemically synthesized opioid that acts on opioid receptors in the body with anesthetic and analgesic effects. It is 100 times more effective than morphine and is commonly used in the treatment of moderate to severe pain, Hua Zhendong, technical director of the China National Narcotics Control Commission (NNCC) national narcotics laboratory, told the Global Times.

Geng, citing statistics from the US Drug Enforcement Administration, noted that the measures China has been adopting over the matter have proved effective, as only four cases of fentanyl smuggling from China were discovered by the US Customs and Border Protection.

However, the number of deaths due to fentanyl abuse in the US remains at a high level, which shows that the opioid crisis does not originate from China, but is a result of a mixture of factors, Geng said.

Taking up five percent of the global population, US people consume 80 percent of the world's opioid drugs, and the US government should do more to reduce the demand for such drugs rather than pointing fingers at others, Geng said.

The US should acknowledge the great amount of efforts made by the Chinese side in an objective fashion, Geng noted.

The US should at the same time strengthen its domestic supervision over the drugs and take concrete actions to effectively combat the trafficking and smuggling of fentanyl, he said.

China has added all fentanyl-related analogues to the country's list of controlled drugs since May 1. A total of 25 fentanyl analogues and two precursors have been put on the list, more than those on the United Nations' list, the Xinhua News Agency reported.

The international community, including the US Drug Enforcement Administration (DEA), commended the move, Xinhua said.

Since the control took effect, China has made unprecedented efforts in addressing the fentanyl issue, in terms of issuing laws and regulations, conducting an overall market inspection, and stepping up police investigations, Xinhua said.

China has been urging logistics firms to implement real-name deliveries, open-box examinations and machine security checks, and has arranged for key customs areas to increase the investigation of high-risk international postal parcels, to ensure that all measures come into effect, Geng said.