WORLD US formally retreats from its longest war

US formally retreats from its longest war 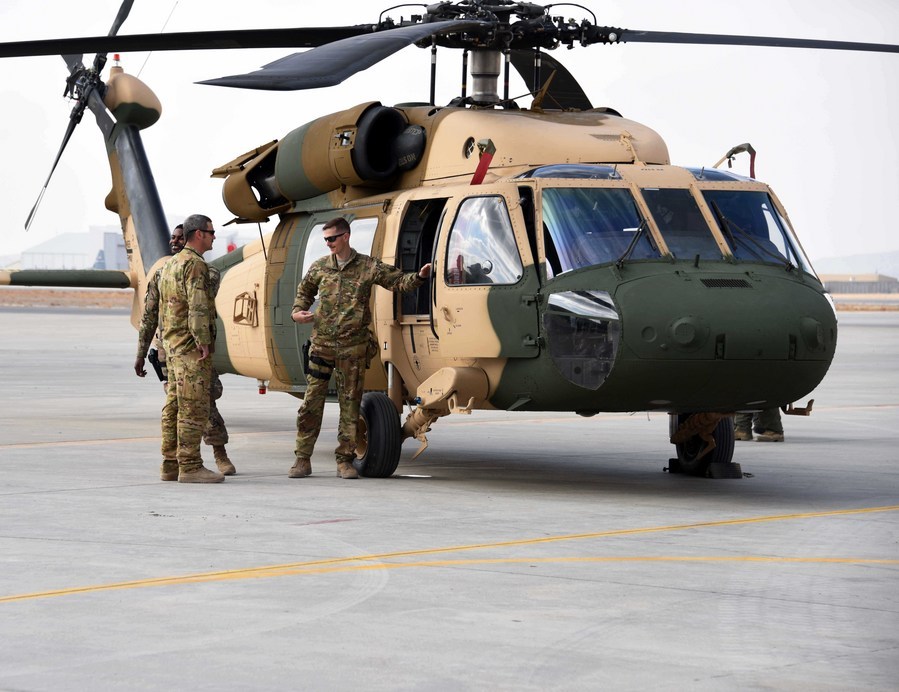 Photo taken on Jan 23, 2018 shows a Black Hawk helicopter during a handover ceremony between the US forces and the Afghan air force in Kandahar province, south Afghanistan. [Photo/Xinhua]

KABUL, Afghanistan－The final phase of ending the United States' "forever war" in Afghanistan after 20 years formally began on Saturday, with the complete withdrawal of the last US and NATO troops to take place by the end of summer.

US President Joe Biden had set May 1 as the official start of the withdrawal of the remaining forces, about 2,500-3,500 US troops and about 7,000 soldiers from NATO countries.

Even before Saturday, the herculean task of packing up had begun.

The military has been taking inventory, deciding what is shipped back to the US, what is handed to the Afghan security forces, and what is to be sold as junk in Afghanistan's markets. In recent weeks, the military has been flying out equipment on massive C-17 cargo planes.

The US is estimated to have spent more than $2 trillion in Afghanistan in the past two decades, according to the Costs of War project at Brown University, which documents the hidden costs of the US military engagement.

US defense officials and diplomats told The Associated Press the withdrawal has involved closing smaller bases over the last year. They said that since Biden announced the end-of-summer withdrawal date in mid-April, roughly 60 military personnel had left the country.

The US and its NATO allies went into Afghanistan together on Oct 7,2001, to hunt the al-Qaida perpetrators of the Sept 11 terrorist attacks who lived under the protection of the country's Taliban rulers. Two months later, the Taliban had been defeated and al-Qaida fighters and their leader, Osama bin Laden, were on the run.

In his withdrawal announcement last month, Biden said the initial mission was accomplished a decade ago when US Navy SEALs killed bin Laden in his hideout in Pakistan. Since then, al-Qaida has been degraded, while the terrorist threat has "metastasized" into a global phenomenon that is not contained by keeping thousands of troops in one country, he said.

Until now, the US and NATO have received no promises from the Taliban that they will not attack troops during the pullout. In a response to questions, Taliban spokesman Suhail Shaheen said the Taliban leadership was still mulling over its strategy.

The insurgent group continues to accuse Washington of breaching the deal it signed with Biden's predecessor, Donald Trump, more than a year ago. In that agreement, the US said it would have all troops out by May 1.

In a statement on Saturday, Taliban military spokesman Zabihullah Mujahid said the passing of the May 1 deadline for a complete withdrawal "opened the way ... to take every counteraction it deems appropriate against the occupying forces".

However, he said fighters on the battlefield will wait for a decision from the leadership before launching any attacks.

Violence has spiked in Afghanistan since the February 2020 deal was signed. Peace talks between the Taliban and the Afghan government, which were part of the agreement, quickly bogged down. On Friday, a truck bomb in Logar Province killed 21 people.

Afghans have paid the highest price since 2001, with 47,245 civilians killed, the Costs of War project said. Millions were displaced inside Afghanistan or fled to Pakistan, Iran, and Europe.

Afghanistan's security forces are expected to come under increasing pressure from the Taliban after the US withdrawal if no peace agreement is reached in the interim, Afghan observers said.

Since the start of the war, they have taken heavy losses, with estimates ranging from 66,000 to 69,000 Afghan troops killed.