US general sets two-year goal for driving back Afghan Taliban 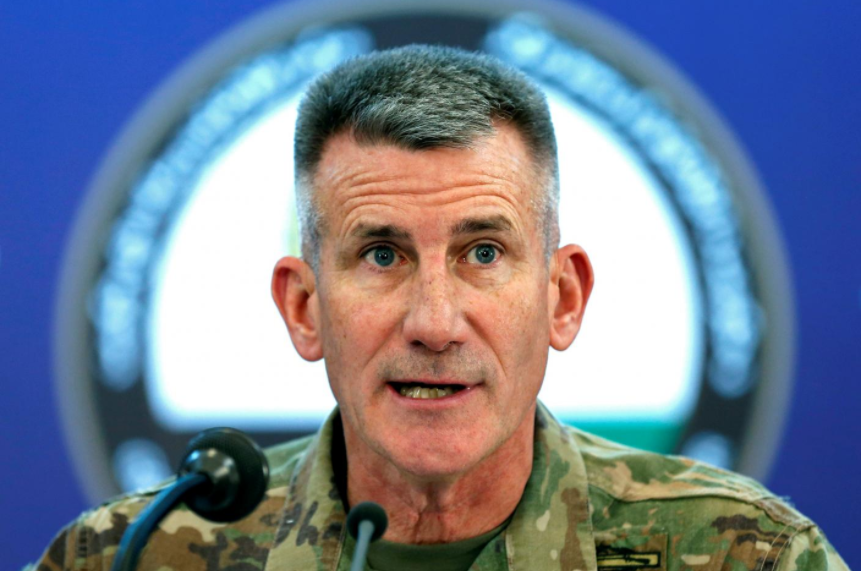 The top U.S. general in Afghanistan said on Monday he believes he could help Afghan forces drive back the Taliban enough to control at least 80 percent of the country within two years, compared with about two-thirds today.

General John Nicholson, citing counter-insurgency doctrine, said gaining 80 percent control of the country would represent a turning point in the 16-year-old conflict, which has become the longest U.S war.

“This we believe is the critical mass necessary to drive the enemy to irrelevance, meaning they’re living in these remote outlying areas, or they reconcile, or they die,” Nicholson told a Pentagon news briefing via video conference from Afghanistan.

Many areas that were regained during U.S.-led operations eventually reverted to Taliban control when Western forces turned them over to the Afghans.

The U.S. military presence is just a fraction of its peak levels today. President Donald Trump sent an additional 3,000 troops to Afghanistan in recent weeks, bringing the total number of U.S. troops to about 14,000.

The Pentagon is also directing more and more intelligence assets and firepower to the country as gains against the Islamic State in Iraq and Syria free up resources for Afghanistan.

That has allowed for a major increase in U.S. air strikes, which Nicholson said reached their highest level this year since 2012.

As of August, 13 percent of the 407 districts in Afghanistan were under Taliban control or influence, compared with 11 percent in February, according to a report released last month by the U.S. government watchdog, the Special Inspector General for Afghanistan Reconstruction (SIGAR).

Many analysts, as well as current and former U.S. officials, believe that Afghanistan’s war cannot be won militarily, particularly when the Taliban benefit from safe-havens in Pakistan.

Trump has articulated a harder policy toward Pakistan in recent months, but U.S. officials say they have not yet seen a meaningful shift by Islamabad against insurgents using Pakistan as a hub for attacks in Afghanistan.

The Afghan army also suffers from deep structural problems, including high casualty rates, rampant illiteracy, corruption and a frequent lack of tribal ties to areas where they are sent to fight.

Still, in Nicholson’s view, getting Afghan forces to hold 80 percent of the country’s population would leave the Taliban with less than 10 percent control.

“Maybe the rest is contested,” he said.

One way that Nicholson hopes to increase pressure on the Taliban is to curb their financing, and he showed videos to Pentagon reporters of U.S. strikes in recent days against Taliban opium factories.

He cited estimates of between 400 and 500 opium factories in Afghanistan.

The U.N. Office on Drugs and Crime (UNODC) said output of opium made from poppies in Afghanistan, the world’s main source of heroin, stands at around 9,000 metric tons this year.