The United States has offered talks with the Democratic People's Republic of Korea "anywhere, anytime without preconditions" and looks forward to a positive response, the new US special envoy for the DPRK said on Monday. But experts have dismissed the move as a hollow gesture that won't help break the nuclear impasse on the Korean Peninsula. 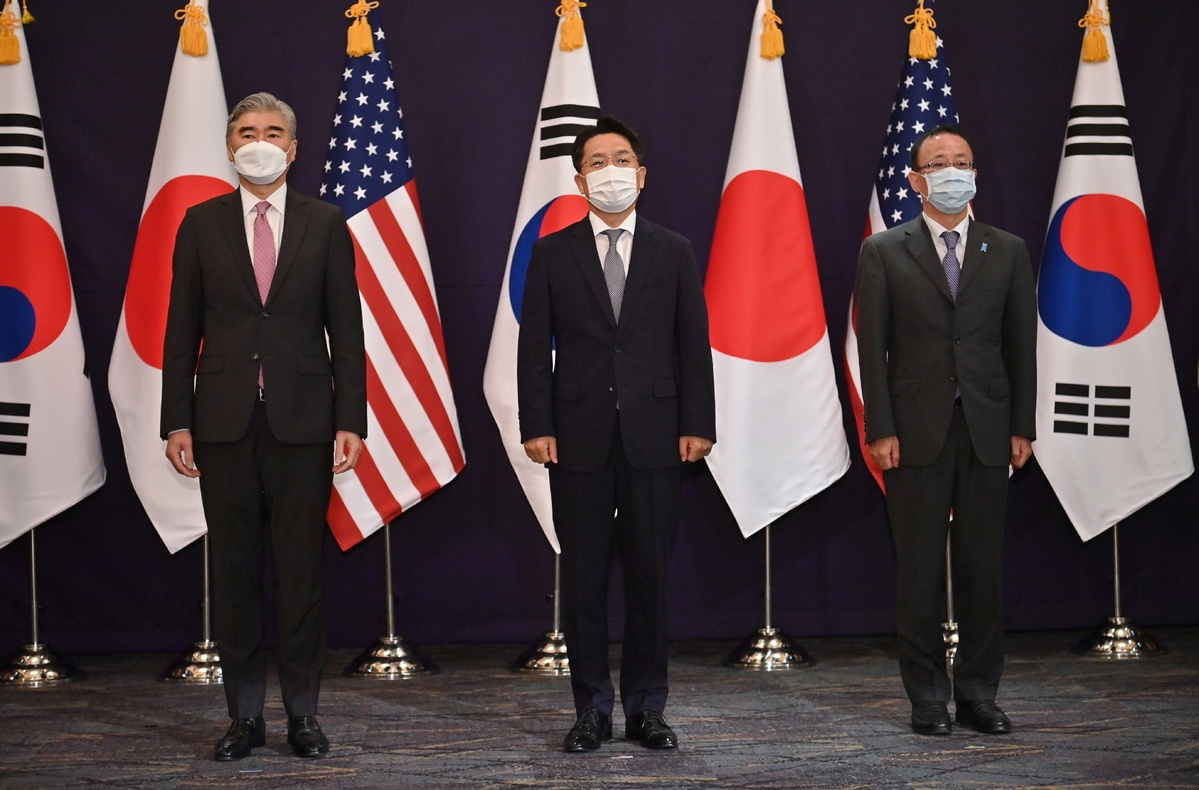 Sung Kim, US President Joe Biden's special representative for the DPRK issue, is in Seoul to speak with officials from the Republic of Korea and Japan about the US' stalled diplomacy with the DPRK over denuclearization and US-led sanctions.

"We continue to hope that the DPRK will respond positively to our outreach and our offer to meet anywhere, anytime without preconditions," Sung Kim said, but with no word of any planned efforts to contact Pyongyang.

He made the remarks during trilateral talks in Seoul with his counterparts from the Republic of Korea and Japan, Noh Kyu-duk and Takehiro Funakoshi, amid an impasse in denuclearization talks on the Korean Peninsula.

It was the envoy's first visit to the ROK since his appointment last month.

"His debut indicates a start in the US' policy toward Pyongyang," said Li Chengri, a researcher at the Chinese Academy of Social Sciences. "Though the US claimed its offer of a meeting is unconditional, it still falls short of Pyongyang's demands of dropping hostility and acting concretely."

Furthermore, the DPRK is more focused on domestic issues such as food security and economic recovery. So Pyongyang is not likely to respond positively, he added.

Li Nan, a researcher at the Institute of American Studies of the Chinese Academy of Social Sciences, said the trilateral meeting may instead heighten tensions.

"The trilateral meeting is apparently a tool for the US, Japan and the ROK to exchange views, analyze Pyongyang's intentions and coordinate the three allies' steps toward the nuclear issue together," the researcher said.

"The US is pursuing stronger ties between the allies, which literally may stir Pyongyang's nerves and make it feel more threatened. It would do nothing good for the stability of the Korean Peninsula."

The trilateral talks came after DPRK top leader Kim Jong-un said on Friday that the country should prepare for both dialogue and confrontation with the US, particularly confrontation, according to DPRK state media KCNA.

During Sung Kim's bilateral talks with his ROK counterpart Noh earlier on Monday, the US envoy said that Washington will also be prepared for either dialogue or confrontation.

"We will be prepared for either, because you know, we are still waiting to hear back from Pyongyang," he said. Hopefully, Kim Jong-un's "reference to dialogue indicates that we will get a positive response soon", he said.

The ROK said on Monday that Seoul hopes the DPRK top leader's recent remarks will lead to a resumption of talks between the neighbors on the Korean Peninsula, as well as between the US and the DPRK.

While Sung Kim urged Pyongyang to respond positively, he also stressed on Monday that the US government will continue with its sanctions regime against Pyongyang.

"Right now the US is making pointless gestures rather than concrete solutions. Maintaining and strengthening pressure against Pyongyang by touting sanctions is an old trick of the US government, and it won't change anything on the Korean Peninsula," Li Nan said.

To break the deadlock, the US needs to adopt a multilateral approach that listens to Pyongyang's voice and involves other stakeholders such as China and Russia, he said.