While people of Trinidad and Tobago (T&T) on Monday applauded the arrival of a batch of 200,000 doses of COVID-19 vaccine made by China's Sinopharm, a storm of criticism and mockery swept the US Embassy after its announcement of 80 vials of vaccine donated to the nation of 1.4 million people. 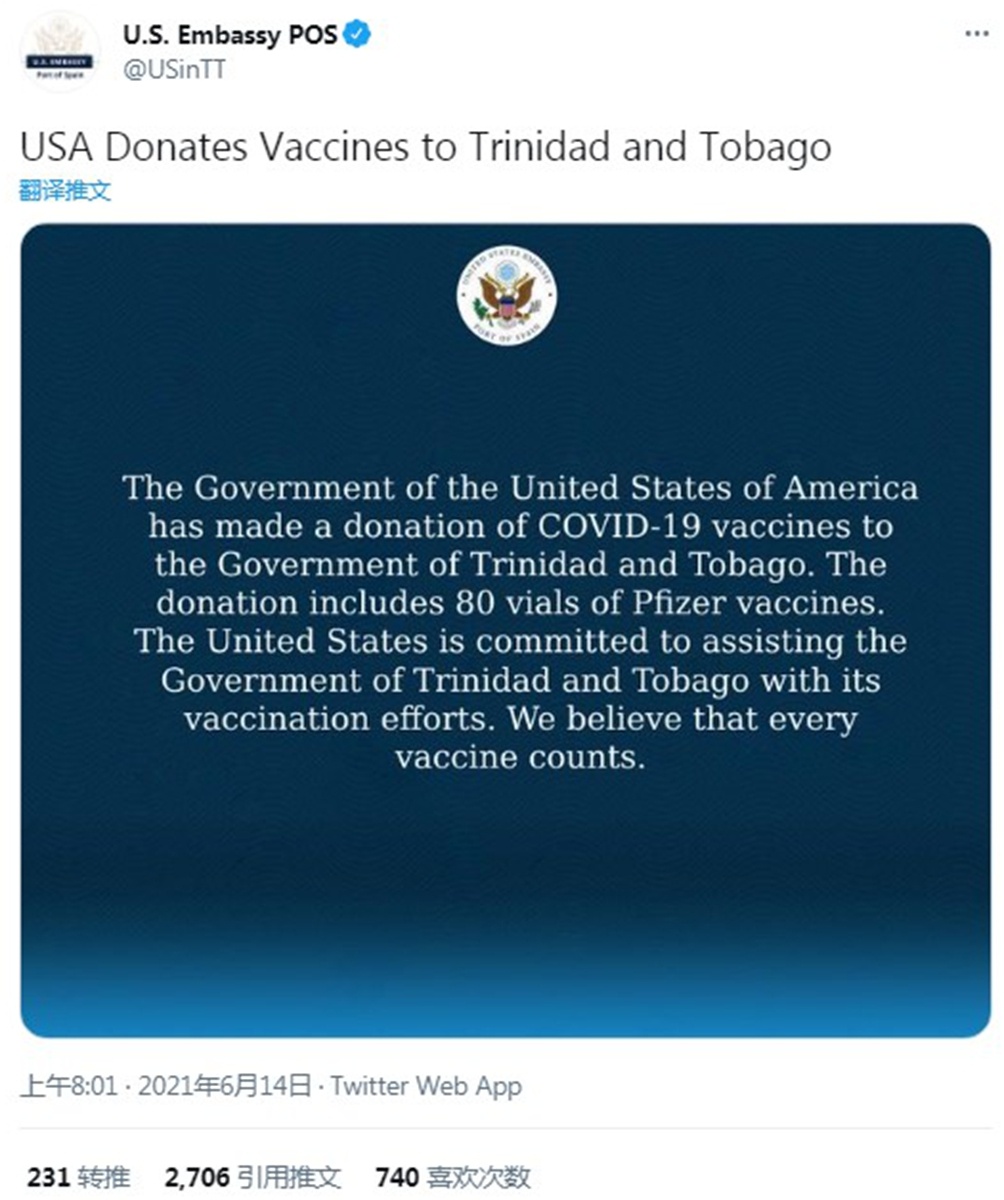 The country received its latest batch of 200,000 shots procured by the local government in the capital, Port of Spain, on Monday noon, with support of Chinese embassy in T&T. This is the second batch from China after a donation of 100,000 doses on May 19.

The US embassy in T&T announced on early Monday its donation of 80 vials of Pfizer vaccines on Twitter, stressing that "every vaccine counts."

A single vial normally contains five doses, sometimes six, meaning that only 200 people could be inoculated given each person requires two shots. The doses will go to the Ministry of National Security, local officials said.

The tweet soon gathered mockery and was widely shared online, with many attaching satiric comments or memes expressing their surprise and disappointment about the size of the donation.

"This has got to be a joke." "The US sends more bombs in a day to the Middle East," said some Twitter users.

"There are almost as many words in this statement as vaccine vials being donated," a Twitter user mocked.

"80 vials? And you paid someone more than what they cost to make this post about it?" another one questioned.

"…just 80 vials? Trinidad and Tobago has a population of just over a million people. I hope China steps in to fulfil the rest of the supply. They have been very good about delivering, and it is precisely why my elderly parents are excited about their vaccines over western ones," a Twitter user commented, among many others who compared the donation from the US with China's latest batch. 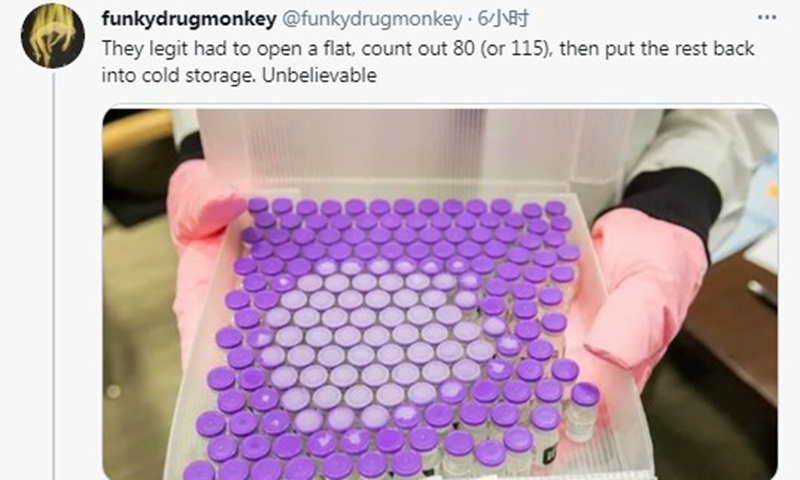 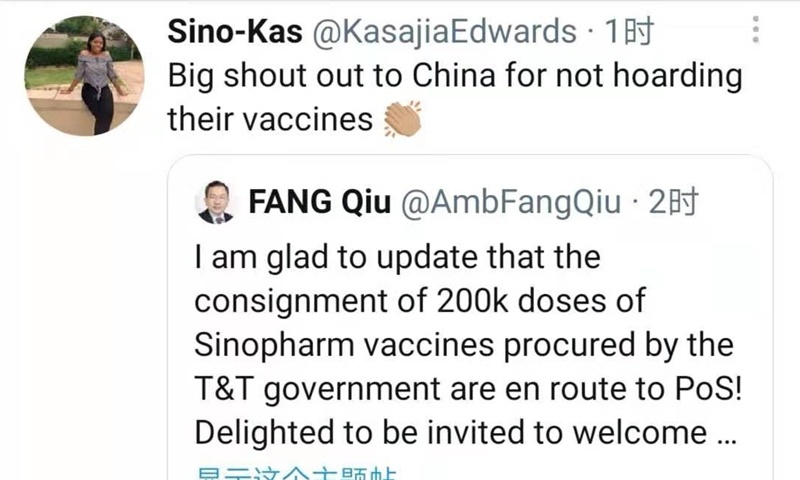 Trinidad and Tobago has recorded 670 deaths and nearly 29,000 cases of the coronavirus with few vaccines options. Media reported that the country had a steep rise in cases and deaths in May.

China's first batch of donated vaccines were soon to be used for mass vaccination on May 21, only two days after its arrival, receiving much appreciation and recognition for its good safety and efficacy from local people, including T&T's Senator, Laural Lezamaleesing. 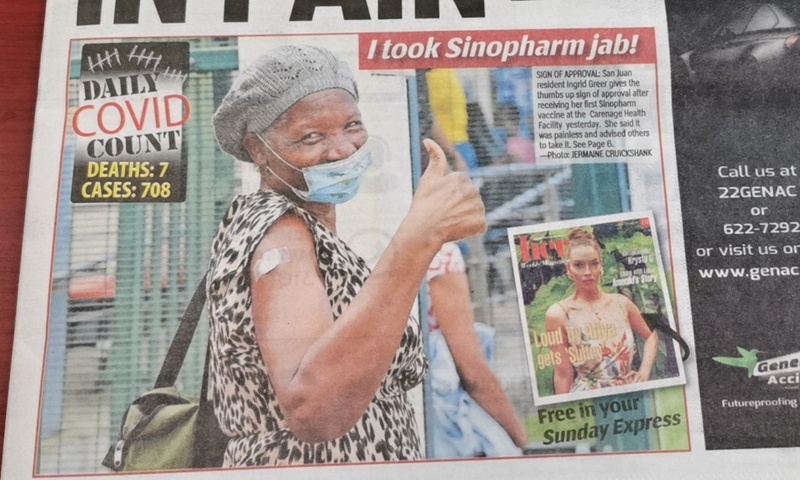 "We thank you for assisting us in acquiring the Sinopharm in a timely manner. The key to normalcy and stability right now is with mass vaccination. This will lead us on the path to economic recovery. We do not need empty promises but action. We look out for those who look out for us," a Facebook user suggested after learning about the update of China's vaccine batch.

"China is literally all the way over there and we have gotten more from them than our 'neighbor' in the north," A Twitter user Amanda said.

The Global Times found that China is one of the country's largest suppliers of vaccines while the US has provided far less shots to T&T than to other neighboring countries.

Ironically, the local newspaper, Sunday Express, published on Sunday an interview with the US embassy's deputy chief of mission who attacks China and advertises "US democracy".

Within hours of the article being published, the announcement of the donation was met with ridicule across the web. 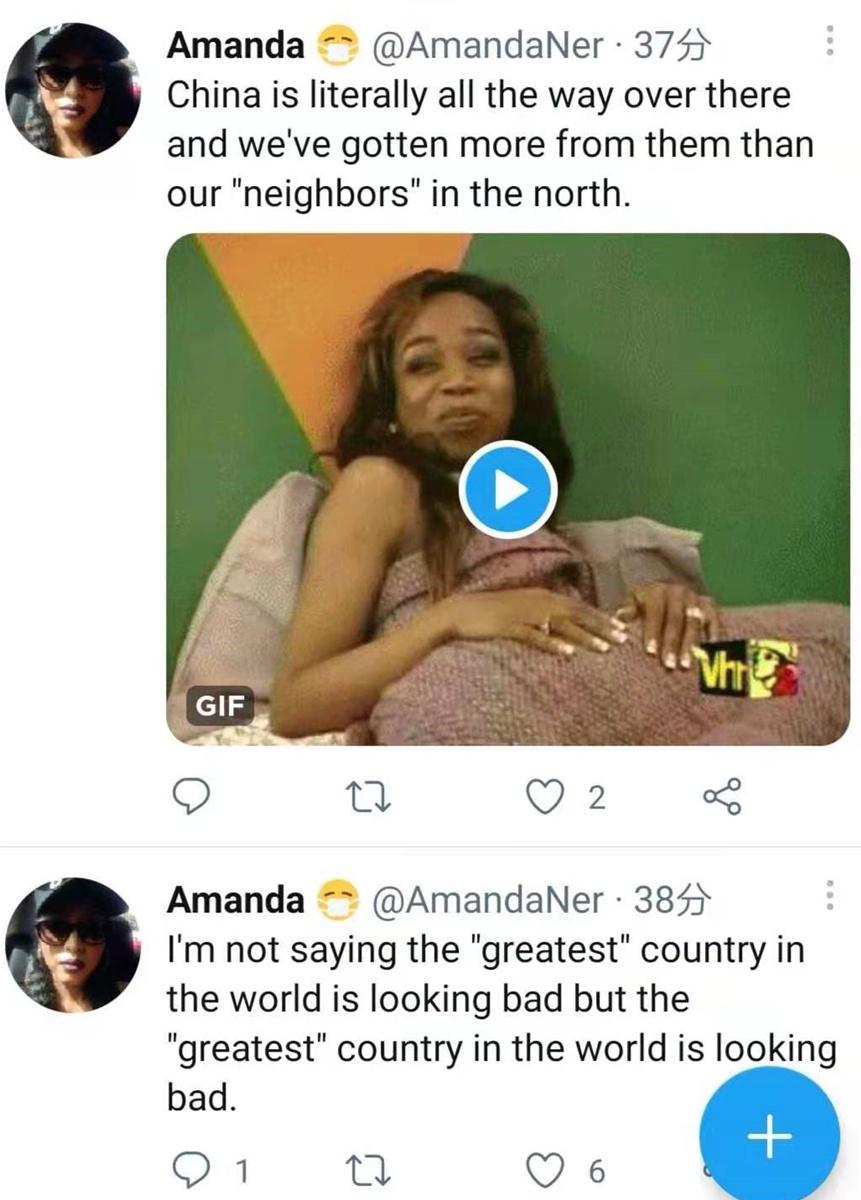 Unsparing criticism sprouted on Facebook with comments like "I saw that article. Very condescending lecturing without facts checking," and "your actions prove your efficiency and your lip service proves your inability. China is helping us and the developing world. Not America."

"How many have been delivered by them? Nothing, other than lip service, condescending lecturing, even malicious labeling… Action over rhetoric," Chinese ambassador to T&T Fang Qiu responded on social media on Sunday.

The United States Embassy in Port of Spain said the Biden-Harris Administration announced earlier that it is allocating the first 25 million doses out of the 80 million the US has already committed to donate by the end of June. But empty words cannot convince local people.

The Global Times learned that more vaccines are expected to be sent to T&T from China in the upcoming months to support the local mass vaccination program as the country has procured 500,000 doses made by Chinese manufacturers.