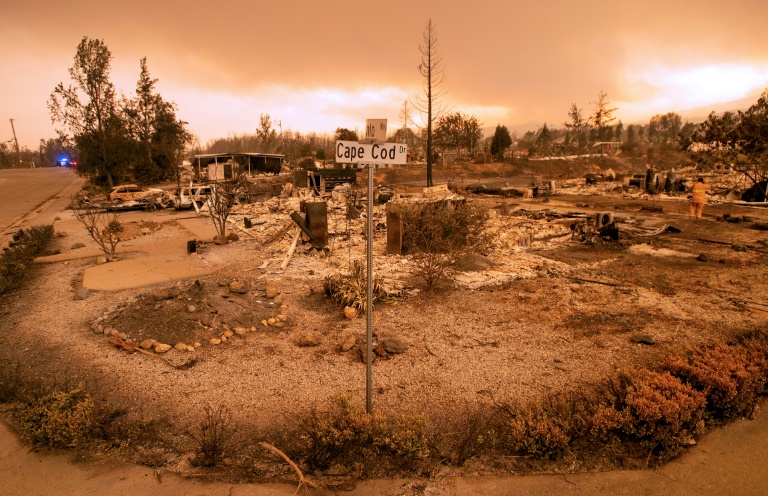 The US federal government approved aid Saturday for California as thousands of firefighters battled to contain a series of deadly raging wildfires that have killed six people, including two young children and their great grandmother, and destroyed hundreds of buildings.

The largest of the fires menacing the state has nearly doubled in size, while another pushed thousands of people to flee and a third forced the partial closure of the popular Yosemite National Park.

A huge column of smoke rotated rapidly above the massive Carr Fire with such strength it looked like a tornado in a fire whirl sometimes dubbed a "firenado."

Another firefighter died in the Ferguson Fire.

In declaring an emergency in California, President Donald Trump "ordered federal assistance to supplement state, tribal and local response efforts due to the emergency conditions resulting from a wildfire beginning on July 23," the White House said.

The Federal Emergency Management Agency "is authorized to identify, mobilize and provide at its discretion, equipment and resources necessary to alleviate the impacts of the emergency," it said.

"Winds, high temperatures and dry vegetation still have the potential to fuel fire growth. Fire spread has been active in all directions and has made significant runs," Cal Fire said.

Governor Jerry Brown on Friday asked for federal assistance "to save lives and to protect property," his office said in a statement.

He asked for help, including military aircraft, shelter supplies and water for 30,000 evacuated residents in Shasta County, in north-central California, where the Carr Fire has grown "uncontrollably," the statement said.

Brown declared a state of emergency in Shasta and ordered National Guard forces to assist the 3,400 fire personnel already trying to contain the Carr Fire, which has destroyed 500 structures.

More than 1,300 firefighters are battling the fast-moving Cranston Fire, which began on Wednesday and forced the evacuation of about 7,000 people, the US Forest Service said.

It added that the hazards created by Cranston and another fire have caused the temporary closure of all US Forest Service lands within the Santa Rosa and San Jacinto Mountains National Monument.

A 32-year-old man has been arrested and charged with 15 arson counts, including for the Cranston Fire.

The Ferguson Fire has encroached upon the Yosemite National Park in central California, forcing the partial closure of the popular attraction.

"Firefighters worked through the night extending and strengthening containment lines, while also monitoring a small fire that jumped a line Friday afternoon," according to InciWeb, the Forestry Service's incident information website.

Last year was the worst on record for wildfire devastation in California, with more than 40 deaths and around 9,000 structures destroyed, following fires that ravaged the Napa and Sonoma wine regions.