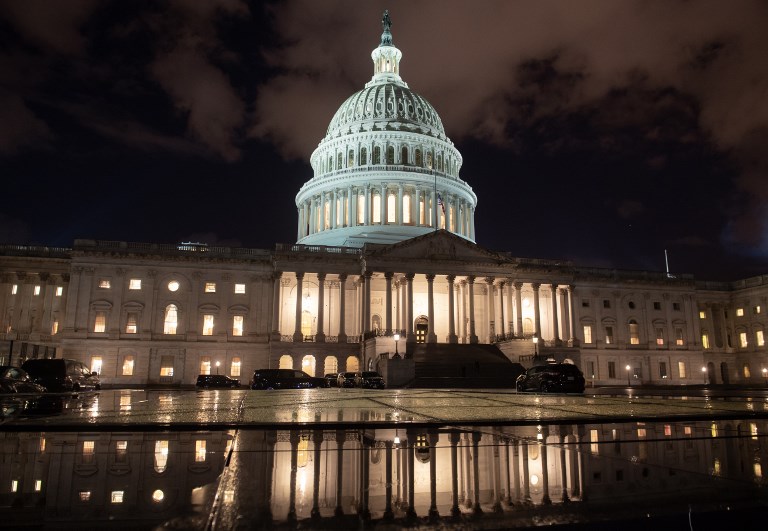 The US Capitol is seen ahead of a possible government shutdown, in Washington, DC, December 21, 2018. (Photo: AP)

A partial shutdown of the US government could slash job growth by as much as 500,000 in January and lift the unemployment rate above four percent unless the impasse in Washington is resolved before next Friday, economists warned.

Some 800,000 government workers missed their first paycheck on Friday following the partial government shutdown. The chaos started on December 22 as President Donald Trump demanded from the U.S. Congress 5.7 billion US dollars this year to help build a wall on the country's border with Mexico.

The Labor Department, which has not been affected by the shutdown, surveys employers and households for its closely watched employment report, which includes nonfarm payrolls and the unemployment rate, during the week that includes the 12th of the month.

For this month, the pay period for most federal employees that includes the week of the 12th runs from January 6 to 19. About 380,000 workers have been furloughed, while the rest are working without pay.

Unless the government reopens next week, furloughed workers will probably be counted as unemployed, as they would not have received a salary during the pay period survey.

"So, if the government remains closed past January 19, then furloughed federal workers will not receive pay during the survey week, meaning that we'd very likely get a big drop in the headline payrolls report, something on the order of perhaps 500,000 to 600,000," said Omair Sharif, senior US economist at Societe Generale in New York.

That could result in the first monthly decline in employment since September 2010 and snap a string of 99 consecutive months of jobs gains.

But if Congress decides to pay these workers retroactively as was the case following the October 2013 government shut down, they would be considered employed.

The economy created 312,000 jobs in December, the most in 10 months. Trump likes to boast about the strong labor market as one of his crown achievements. The shutdown, which on Friday tied the record for the longest in the nation's history, could also drive up the unemployment rate in January.

The household survey from which the jobless rate is derived would likely consider the furloughed workers as unemployed.

"These workers account for about 0.2 percent of the current labor force, so all else equal, the increase in unemployment associated with the government shutdown could lead to a 0.2 percentage point increase in the unemployment rate in January," said Daniel Silver, an economist at JPMorgan in New York.

The unemployment rate rose two-tenths of a percentage point to 3.9 percent in December as some jobless Americans piled into the labor market confident of their employment prospects.

While these impacts on the labor market are likely to be temporary, they could make it difficult for policymakers to get a clear read of the health of the economy for monetary policy.

JPMorgan estimates the shutdown is cutting 0.1-0.2 percentage point every week from quarterly economic growth. It said the impact could be even larger if the shutdown led to a significant shift in sentiment.