WORLD US governors ratchet up restrictions ahead of Thanksgiving

US governors ratchet up restrictions ahead of Thanksgiving

From California to Pennsylvania, governors and mayors across the US are ratcheting up COVID-19 restrictions amid the record-shattering resurgence of the virus that is all but certain to get worse because of holiday travel and family gatherings over Thanksgiving. 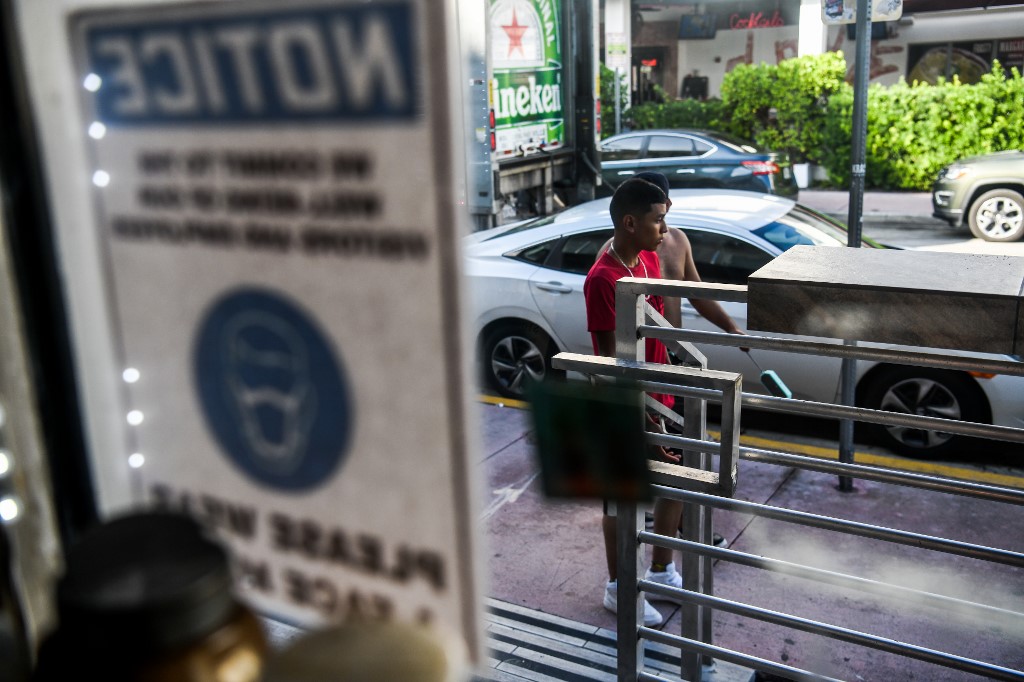 People walk on the street without wearing facemask amid the coronavirus pandemic in Miami Beach, Florida on November 13, 2020. (File photo: AFP)

Leaders are closing businesses or curtailing hours and other operations, and they are ordering or imploring people to stay home and keep their distance from others to help stem a rising tide of infections that threatens to overwhelm the health care system.

“I must again pull back the reins,” New Jersey Gov. Phil Murphy said Monday as he restricted indoor gatherings to 10 people, down from 25. “It gives me no joy.”

California Gov. Gavin Newsom announced he is pulling the “emergency brake” on efforts to reopen the economy, saying the state is experiencing the fastest growth in cases yet, and if left unchecked, it will lead to “catastrophic outcomes." The move closes many nonessential indoor businesses and requires the wearing of masks outside homes, with limited exceptions.

The tightening came as Moderna Inc. announced that its experimental coronavirus vaccine appears to be over 94% effective, based on early results. A week ago Pfizer disclosed similar findings with its own formula.

The news raised hopes that at least two vaccines against the scourge could win emergency authorization and become available in the US before the end of 2020.

A record-breaking nearly 70,000 people were hospitalized with the coronavirus in the US as of Sunday, 13,000 more than a week earlier, according to the COVID Tracking Project. Deaths in the US are running at more than 1,100 per day on average, an increase of over 50% from early October.

The virus is blamed for more than 246,000 deaths and over 11 million confirmed infections in the the US

Thanksgiving was on the minds of leaders nationwide as they enacted tougher restrictions amid fears that the holiday will lead to more infections.

“We don’t really want to see mamaw at Thanksgiving and bury her by Christmas,” said Dr. Mark Horne, president of the Mississippi State Medical Association. “It’s going to happen. You’re going to say ‘Hi’ at Thanksgiving, ‘It was so great to see you,’ and you’re going to either be visiting by FaceTime in the ICU or planning a small funeral before Christmas.”

People from different households will be barred in Washington from gathering indoors unless they have quarantined. There is no enforcement mechanism. Inslee said he hopes people obey anyway.

Chicago Mayor Lori Lightfoot called on residents in the nation’s third-largest city to restrict social gatherings to 10 people starting Monday. In instructions that were advisory, not mandatory, she urged residents to stay home except for essential activities, like going to work or grocery shopping.

Philadelphia banned all indoor dining at restaurants and indoor gatherings of any size, public or private, of people from different households, starting this Friday.

In Michigan, Democratic Gov. Gretchen Whitmer warned she has the authority to issue a second stay-at-home order to curb the spiking coronavirus if necessary and said it was “incredibly reckless” for President Donald Trump's science adviser Scott Atlas to urge people to “rise up” against Michigan’s latest restrictions.

Over the weekend, Whitmer announced that Michigan high schools and colleges must halt in-person classes, restaurants must stop indoor dining and entertainment businesses must close for three weeks. Gathering sizes also will be tightened.

Fourteen men were charged earlier this fall in an alleged plot to kidnap the governor in anger over her COVID-19 restrictions.

Atlas later tweeted that he “NEVER” would endorse or incite violence.

Even North Dakota Republican Gov. Doug Burgum, who has resisted a mask mandate for months, put one in place over the weekend, amid a severe outbreak in the state. Iowa Gov. Kim Reynolds took a similar action and enacted a limited version of a mask mandate Monday.

In hard-hit South Dakota, Gov. Kristi Noem continued her hands-off approach and resisted a mask mandate or other restrictions.

Texas Gov. Greg Abbott in recent days has been emphasizing that new treatments and vaccines are expected to become available soon.

Vice President Mike Pence sounded an upbeat tone Monday on a call with governors, saying that the government is ready to help states where hospitals are nearing capacity and emphasizing that vaccines are coming.

“America has never been more prepared to combat this virus,” he said.