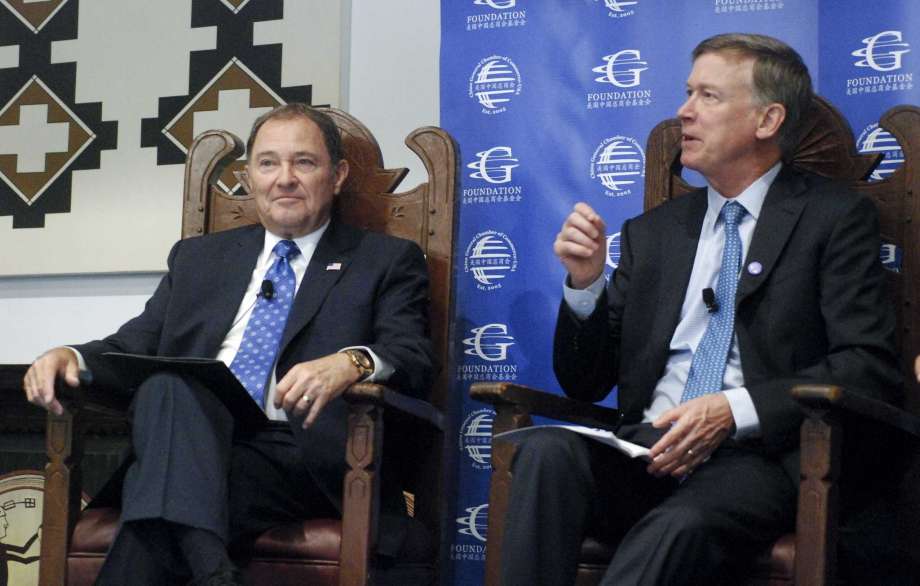 From technologies to economic growth to cultural exchanges, US governors expressed enthusiasm for cooperation with China at a time when the two countries are involved in a spiraling trade conflict.

"I believe in international trade and international business. The marketplace is global in nature. We can't be just in isolation. We need to find ways to work together and have international exchange," Utah Governor Gary Herbert told a gathering on Thursday in Santa Fe, New Mexico.

The event, hosted by the National Governors Association ahead of its annual summer meeting, brings together US governors, economic development leaders and trade representatives with Chinese business executives to explore opportunities to boost the trade relationship.

Herbert said he has visited China on numerous occasions, and at least once a year the state sends a delegation to Beijing, Shanghai or other parts of China to promote trade.

"It's not just about money; it's about building relationships and trust," said Herbert. "One of the benefits that comes along with international trade is understanding, which sometimes is lost."

Although China is halfway around the world from Utah, the most important distance is the "final 3 feet" so that people from both countries can sit and talk to each other eye to eye and find pathways for success, he said.

"It (subnational cooperation) is very important. I think the governors of the states continue to build good relationships. We're doing business with China, building that relationship between the states," Arkansas Governor Asa Hutchinson said on the sidelines of the meeting.

Since 2003, when Arkansas saw its first investment from China, the southeastern US state has secured more than $2 billion through commitments from Chinese firms, with the potential for 1,600 jobs.

"We're grateful for the Chinese investments in Arkansas, reshoring actual manufacturing jobs and opening up the market of the United States to China," Hutchinson said.

He said the investments also help utilize the state's raw materials, such as timber, adding that he expects projects to be completed despite concerns that the tariff dispute might affect investment.

Hutchinson said the state is working with the Trump administration to make sure that the projects can continue, and they will pursue an exemption for many tariffs.

"Both nations can innovate and benefit far more through increased trade and cooperation, by exchanging ideas, goods, and services in an interdependent world," he said.

"Obviously our federal government runs our foreign policy and our trade policy. But the more we can build relationships at the state level, then the more successful we will be at the national level," he said.

According to a recent survey by China General Chamber of Commerce-USA (CGCC), Chinese investments have directly created more than 200,000 jobs across the US, including states of Ohio, Indiana, Pennsylvania, California and Michigan. The CGCC member companies have cumulatively invested over 120 billion dollars in the U.S. economy and directly support over 1 million jobs in the US.

"Our survey also confirmed that Chinese enterprises are committed to long-term expansion goals in the US. Despite a recent slowdown of new Chinese investments, Chinese operations here continue to grow their businesses in states and cities, improve infrastructure and increase exports to China," said Xu Chen, chairman of CGCC-USA and CEO of Bank of ChinaUSA.

To Colorado Governor John Hickenlooper, international trade not only allows for a stronger economy and more rapid expansion but also makes the world a safer place.

"You never have successful businesses with people from foreign countries without a certain level of trust," he said.

Hickenlooper visited China four years ago with a delegation of 60 business executives. He described the experience as "remarkable" and "eye-opening".

The potential is huge for Chinese investors who haven't recognized the "amazing" opportunities in the state, which is a national leader in agricultural products and geospatial technology, he said.

Currently, Colorado imports roughly more than $2 billion of products from China but exports only $600 million worth to China.

"When we were in China, our Chinese counterparts understood that this was an issue and committed to expanding markets and looking for new opportunities for trade that we hadn't maximized yet," he said.

At the Boao Forum in April, President Xi Jinping pledged to further open markets and increase importation of US commodities.

"I thought that was a very good gesture and hopeful," Hutchinson said. "The United States has made some accommodations and adjustments for ZTE that they will continue to be able to sell products to the United States. So both sides are giving some."

"I think it's important that we look for a solution very quickly, so that we don't have any increased tariffs and escalate the tariff war, as some people describe it," he said.