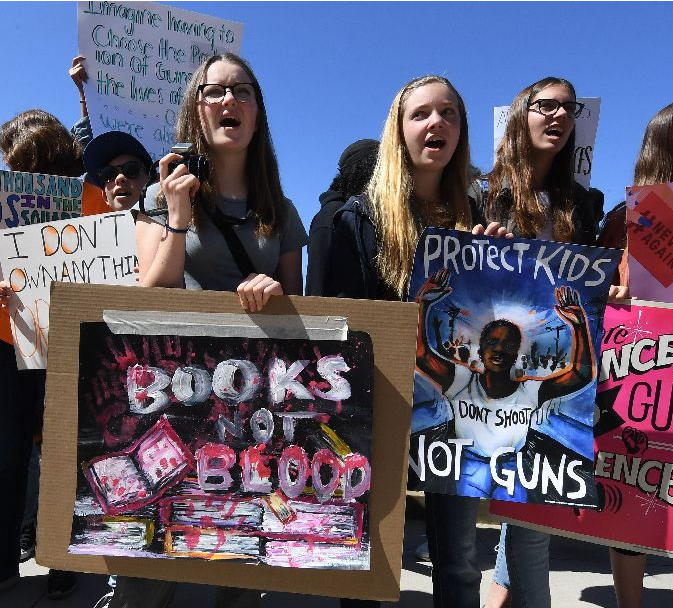 Students from the Santa Monica area participate in a walkout demonstration as part of the National School Walkout for Gun Violence Prevention campaign in Santa Monica, California, the United States on April 20, 2018. (Photo: AFP)

A US pro-gun control group that has been fighting for stopping downloadable guns Monday hailed a ban by a US district judge to block release of blueprints for 3D weapons on the internet.

The Brady Campaign to Prevent Gun Violence, a group advocating gun control, said in a statement that Judge Robert Lasnik of the US District Court of Western District of Washington in Seattle has issued a preliminary injunction blocking the publication of the plans for making untraceable 3D guns on the internet.

"Today's decision is an unqualified success for the American public and, indeed, the global community," Avery Gardiner, co-president of the Brady Campaign, said.

The ban has been pursued by 19 US states and the District of Columbia, as well as the Brady Campaign to Prevent Gun Violence, which have sued the US government for settling a lawsuit nearly two months ago that allowed blueprints of 3D-printed guns to be posted online.

Defense Distributed, a company based in Austin, Texas, argued that the access to the online blueprints is guaranteed under the US Constitution's First and Second Amendments, which protect free speech and the right to bear arms, respectively.

However, the Brady Campaign to Prevent Gun Violence said "the Second Amendment does not grant Defense Distributed the right to publish the blueprints, nor does it protect the right to create or own 3D-printed guns."

"3D-printed guns represent a supreme threat to our safety and security, and we are grateful that Judge Lasnik recognized it as such," said the Campaign's co-president Gardiner.

The pro-gun control group urged the US State Department to "end this threat once and for all" because it is responsible for oversight of firearm exports."

The State Department is "able to step in and protect Americans from foreign terrorists and other dangerous people from obtaining the ability to print their own untraceable assault rifles," said Brady Campaign co-president Kris Brown.

Lasnik issued a temporary restraining order on July 31 to block the release of the online blueprints for printed untraceable 3D guns, and the order is due to expire on Tuesday.

The district judge turned the temporary restraining order into a preliminary injunction, which will remain in place until the case is resolved.

Plaintiffs represented by Washington and other states "have a legitimate fear that adding undetectable and untraceable guns to the arsenal of weaponry already available will likely increase the threat of gun violence that they and their people experience," Lasnik ruled.

"The instability and inaccuracy of 3-D printed firearms pose threats to the citizens of the states, including both users and bystanders, while the toy-like appearance increases the risk of unintentional discharge, injury and/or death," he said.

In 2012, the federal government initially banned the posting of computer aided design allowing users to manufacture a plastic handgun with a 3D printer, but the ban was challenged by Defense Distributed in a lawsuit.

The government signed a tentative settlement in April with Defense Distributed on releasing plans for 3D weapons on the internet.

Lasnik said that posting online plans for 3D weapons that carry no information about licenses, serial numbers and registrations would post a security risks for the public and be abused by felons or terrorists.

"Every single day in America 96 people die from gun violence," the Brady Campaign said in a Twitter post Monday.

"Every day, 47 children and teens are shot in murders, assaults, suicides and suicide attempts, unintentional shootings, and police intervention," according to statistics posted on the group's website.