Andreyah Garland, a 44-year-old single mother of three daughters, bought a shotgun in May for protection in the quaint middle-class town of Fishkill, New York. She joined a new and fast-growing gun club to learn how to shoot. 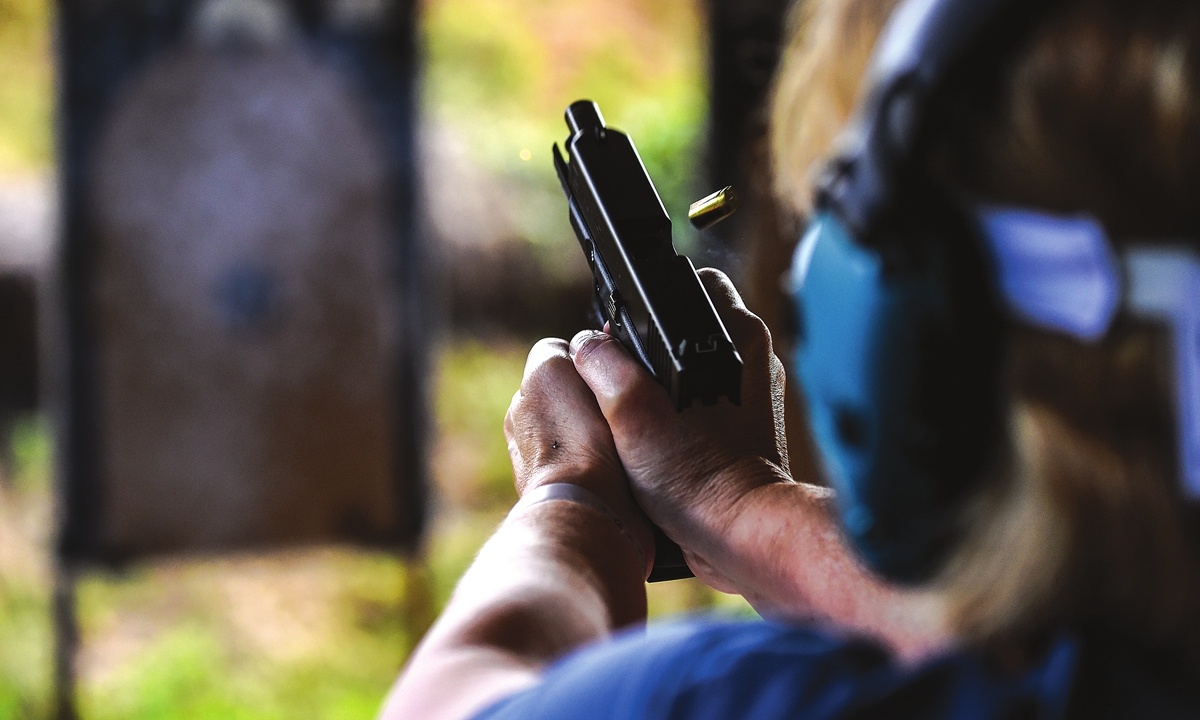 A student fires a handgun during a shooting course at Boondocks Firearms Academy in Jackson, Mississippi, the US on September 26. (Photo: AFP)

She has since applied for a pistol permit and constantly hunts for increasingly scarce ammunition - making three trips weekly to Walmart. "They're always out," she said.

Like legions of other first-time buyers who are contributing to record sales for the US gun industry in 2020, Garland's decision to take up arms is driven in part by disturbing news about the coronavirus pandemic, social unrest over police killings of black people and a potentially contested election that many fear could spark violence.

"With everything going on around us," she said, "you see a need."

Surges in US firearm sales have in recent decades been predictably driven by events sparking fears of impending gun control legislation, such as the election of a Democratic president or a spate of mass shootings, federal gun background check data show. Industry experts and academics who study gun ownership say such surges came largely among the gun-industry's core base of white, male and politically conservative customers who often already owned one or multiple guns.

That market is widening in 2020 to include a new rush of first-time buyers, including many women, minorities and politically liberal buyers who once would not have considered gun ownership, according to Reuters interviews with more than a dozen industry experts, academics and gun store owners.

"People who don't normally think about firearms are being forced to contemplate something outside their universe," said Dan Eldridge, owner of Maxon Shooter's Supplies and Indoor Range in the Chicago suburb of Des Plaines, Illinois. The number of first-time buyers has skyrocketed in 2020, according to industry analysts, trade groups and the CEO of major gun manufacturer Smith & Wesson Brands Inc, Mark Peter Smith. In a September 3 conference call with investors, Smith estimated that firearms neophytes accounted for about 40 percent of sales in 2020, an estimate he called conservative and "double the national average" in past years. In a September 2 call, Sportsman's Warehouse Holdings Inc CEO Jon Barker said the company estimated that 5 million people purchased firearms for the first time across the industry in the first seven months of the year, which matched a recent figure put out by the National Shooting Sports Foundation, a trade group, based on a national survey of retailers.

In a statement to Reuters, Walmart Inc acknowledged supply shortages in outdoor products including hunting but provided no details of its gun and ammunition sales or inventory. "We are working with our suppliers to make product available for our customers as quickly as possible," the company said.

Among the first-timers is Bailey Beeken, 61, who lives in Riverdale, New York and describes herself as a white, politically liberal, middle-class woman. She started taking shooting lessons this summer, she said, because "whichever way this election goes, it could get really scary, and it could get bloody."

With the pandemic pitting mask-wearers against mask protesters, and police brutality protests sparking violent street clashes, "I just feel like it's a powder keg," she said. "I want to be armed and dangerous."

Neither gun companies nor the government releases detailed data on firearm sales or the demographics of buyers. The FBI's National Instant Criminal Background Check System (NICS) - a widely accepted proxy - shows a 41 percent increase in activity during the first nine months of 2020, compared to the same period in 2019, which was a record year. With 28.8 million background checks through the end of September, 2020's surge has already surpassed 2019's all-time high of 28.4 million.

Background checks verify that buyers do not have a criminal record or another issue that might make them ineligible to buy a weapon, such as an arrest warrant or a documented drug addiction. Less than 1 percent of applicants are denied, according to FBI figures.

Eight of the top 10 all-time weeks for background checks have happened in 2020, according to NICS data that goes back to 1998. The top week came in March, when the World Health Organization declared the coronavirus crisis a pandemic. The top month this year came in June, following the late-May killing of George Floyd by Minneapolis police.

Shares of Smith & Wesson and Sturm Ruger & Co Inc, the two top US manufacturers, have soared 131 percent and 59 percent, respectively, in 2020. Both companies did not respond to requests for comment.

The historically high sales are adding millions of weapons to a nation that already has more guns than people. The Geneva-based Small Arms Survey estimated the number of US guns at 393 million in 2017.

The year's historic demand has forced buyers and sellers to get creative in finding weapons and ammo, experts and gun-shop owners said.