WASHINGTON, Nov. 13 (Xinhua) -- Hate crimes reported to the FBI soared about 17 percent across the United States in 2017 compared to the previous year, a FBI report showed released Tuesday. 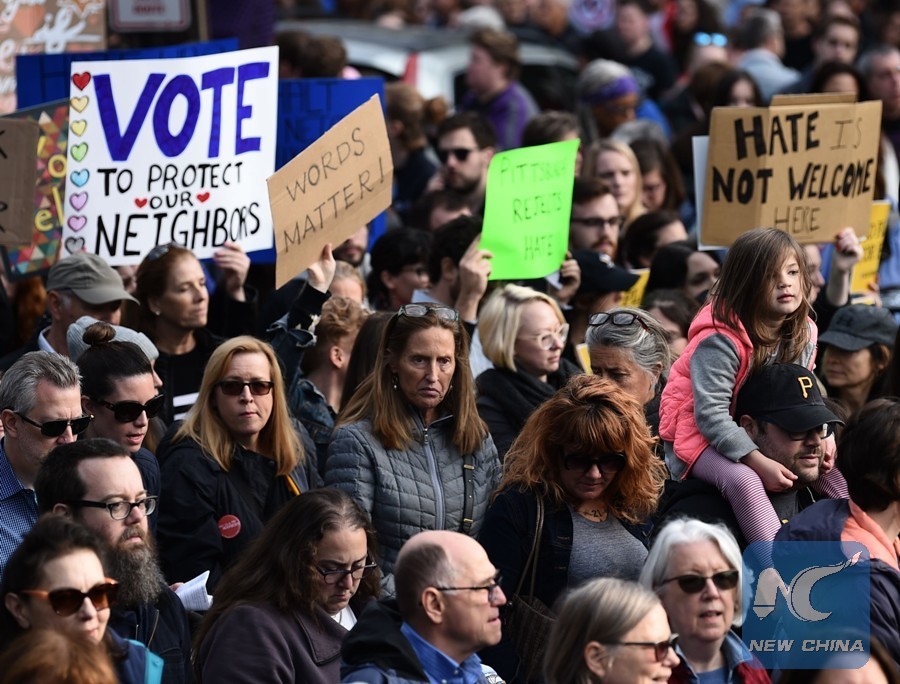 People gather to protest the arrival of U.S. President Donald Trump as he visits the Tree of Life Congregation on Oct. 30, 2018 in Pittsburgh, Pennsylvania, the United States. (Photo: AFP)

A total of 7,175 hate crime incidents were reported to the Uniform Crime Reporting (UCR) Program in 2017, up from 6,121 in 2016, said the UCR Program's annual Hate Crime Statistics report.

It's the third year in a row the FBI has reported an increase in hate crimes. The number of hate crimes in 2016 rose about five percent from 2015.

According to the report, the most common bias categories in single-bias incidents were race/ethnicity/ancestry (59.6 percent), religion (20.6 percent), and sexual orientation (15.8 percent).

Of crimes motivated by race, ancestry or ethnicity, about 48.8 percent were motivated by hatred against African Americans, 17.5 percent stemmed from bias against whites, and 10.9 percent were classified as anti-Latino or anti-Hispanic bias.

In addition to the 7,106 single-bias incidents reported last year, there were also 69 multiple-bias hate crimes reported.

About 5,000 of the hate crimes reported were categorized as crimes against persons, such as intimidation or assault. About 3,000 were considered crimes against property, such as vandalism, robbery, or burglary.

The number of law enforcement agencies reporting hate crimes also increased with about 1,000 additional agencies contributing data across the country, the FBI noted.

Reporting hate crime data to the UCR Program allows the public, researchers, community leaders, and local government to raise awareness of the issue and gain a more accurate picture of hate crimes, said the FBI on its website.