Washington (People’s Daily) - The Trump administration has drawn the ire from states as it escalates trade frictions with China. Businesspeople from the Midwest, also known as the “American heartland”, and economists warned that Washington’s trade policy has hindered the regular cooperation between China and US states. 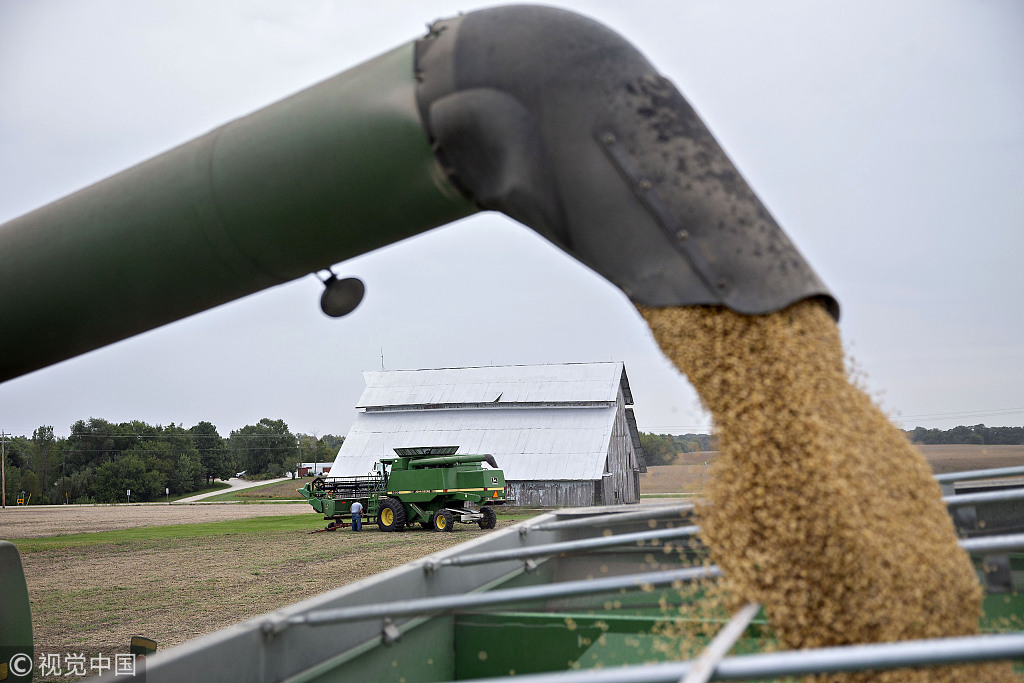 Soybeans are loaded into a grain cart during a harvest in Wyanet, Illinois, US, on Tuesday, Sept. 18, 2018. (Photos: VCG)

The American business representatives expressed their concerns when attending the 2018 annual gala hosted by the China General Chamber of Commerce in Chicago recently.

Business development manager Allen Williams of the Iowa Economic Development Authority said that the sharp fall of soybean prices due to the trade war has caused loss for Iowan farmers, and many of them were forced to divert to other crops.

Many enterprises established factories or supply chains in China as early as the 1980s, he noted, adding that these enterprises would like to see an end of the trade war and hope the two governments solve their problems through conversations.

Many representatives agreed that the trade frictions will bring negative effects to the China-US cooperation, and a considerable number of enterprises would miss development opportunities.

He explained that the uncertainty would impact enterprises’ investment decisions, which has already been indicated by the data from the China-US two-way direct investment.

Stressing the vital importance of trade and investment for China-US ties, former US Treasury Secretary Henry Paulson believed that both China and the US have benefited from them.

He held that as consumption is rising to an increasingly powerful driver for China’s economic growth, it will create huge opportunities for American exporters in the long run.

In the eyes of the former Treasury Secretary, China is growing into a major investor, and is expected to create jobs for US communities.

Todd Buchholz, renowned economist and former White House senior economic advisor illustrated the benefits brought to US citizens through trade with China with his own experience.

The economist who was growing up in New Jersey recalled that there was no large-scale trade between China and the US in his childhood, and low-and middle-income families were always worried when they planned to buy winter coats for their children.

Thanks to the development of the Chinese garment industry and the trade channel established between stores like Walmart and China, the winter coat issue wasn’t a problem again, according to him.

The negative impacts of the trade war would gradually show as time passes, Buchholz told People’s Daily, adding that it was hard to precisely estimate the damage and tell who would become the winner.

Most of the states in the Midwest have established close trade and economic relations with China. Representatives from these states stressed that they will maintain their passion for cooperation with China no matter how the federal government alters its policies.

Cover photo: Soybeans are harvested with a Deere & Co. combine harvester in this aerial photograph taken above Tiskilwa, Illinois, US, on Tuesday, Sept. 18, 2018. With the trade war having a knock-on effect on agricultural commodity flows globally, the European Union has more than doubled its purchases of American beans in the season that began in July.