US House braces for 'long day' to vote on Trump impeachment 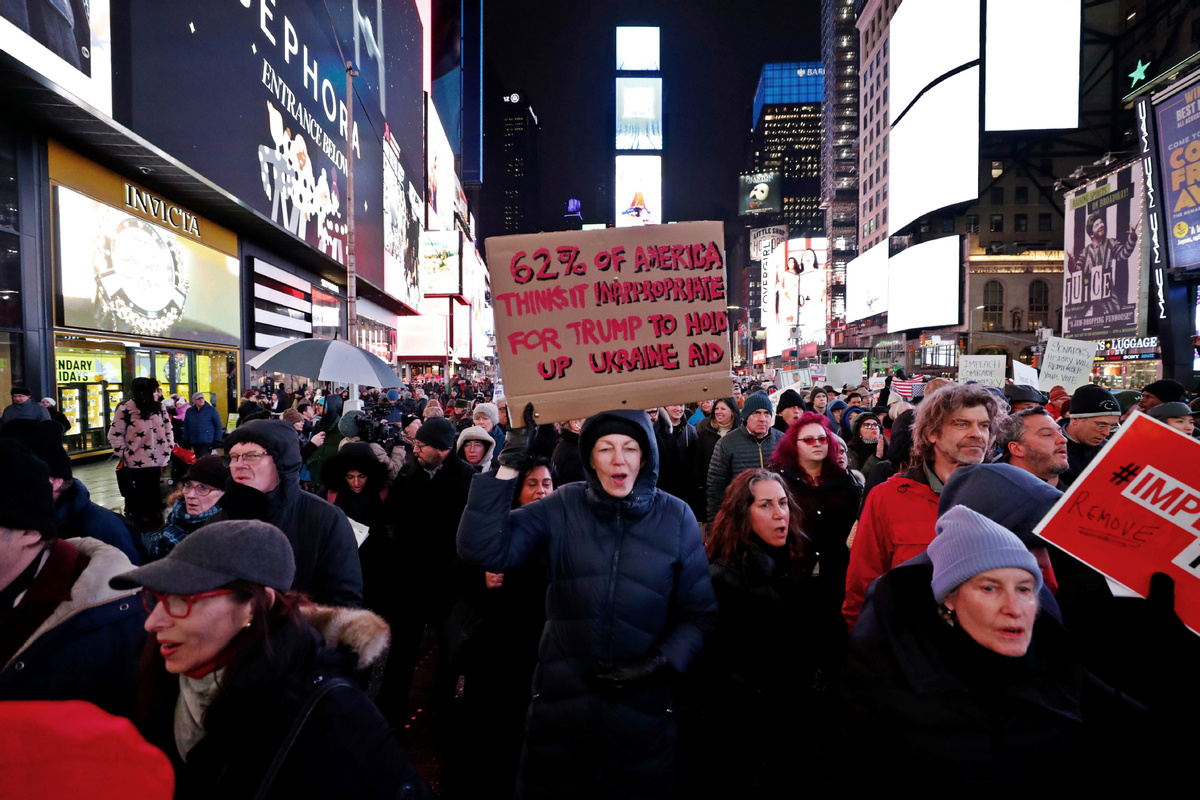 Demonstrators gather to demand the impeachment and removal of US President Donald Trump during a rally at Times Square in New York City, New York, US, December 17, 2019. (Photo: Agencies)

WASHINGTON -- US House Speaker Nancy Pelosi on Tuesday asked fellow Democratic representatives to join her on Wednesday morning to vote on two articles of impeachment accusing President Donald Trump of abusing power and obstruction of Congress.

If the Democrat-led House approves either of the two articles by a simple majority vote, Trump will become the third president in the US history to be formally impeached and face a trial in the Senate. He has repeatedly denied any wrongdoing.

Following a 10-hour heated and polarized debate, the Democrat-led House Rules Committee on Tuesday night voted 9 to 4 along party lines, officially approving the rules to allow for six hours of House floor debate on the articles of impeachment, which will be voted on and argued separately.

The full House is expected to convene at 9 a.m. eastern time (1400 GMT) on Wednesday to begin their floor debate. It's only the third time in US history that the chamber debates impeachment recommendations from the Judiciary Committee against a president.

Under the rules, the debate will be equally divided between Democrats and Republicans and controlled by House Judiciary Committee Chairman Jerry Nadler and Ranking Member Doug Collins or their respective designees. No amendments will be allowed on the floor during the six hours of debate.

The rules also allow for a resolution appointing and authorizing impeachment managers for the Senate trial to be introduced on Wednesday, if the House votes to impeach the president.

"I urge each of you to join me on the Floor," Pelosi said in a letter to House Democrats on Tuesday.

Pelosi said the Democrat-led three-month House impeachment inquiry has been conducted "in a manner that was fair, transparent and deliberative."

"Very sadly, the facts have made clear that the President abused his power for his own personal, political benefit and that he obstructed Congress as he demanded that he is above accountability, above the Constitution and above the American people," she wrote.

"If we do not act, we will be derelict in our duty," Pelosi told fellow House Democrats. "No one is above the law."

The full House vote on impeachment is widely expected to be largely along party lines. No House Republicans signaled they would break ranks. House Minority Whip Steve Scalise said the "only bipartisan vote tomorrow will be against impeachment."

Also on Tuesday, Trump sent a six-page letter to Pelosi to express his "most powerful protest against the partisan impeachment crusade."

"It is time for you and the highly partisan Democrats in Congress to immediately cease this impeachment fantasy and get back to work for the American People," Trump wrote, adding that he has "no expectation" that House Democrats will do so.

In the letter, Trump defended his conduct toward Ukraine, accusing Democrats of "interfering in America's elections."

Moments after his letter was publicized, the president said in the White House that he takes "zero" responsibility for facing impeachment.

If any of the two articles is approved, a trial will start in the Republican-controlled Senate where Trump is widely expected to be acquitted.

McConnell said last week that he will be "in total coordination" with the White House in determining the Republican strategy for the impeachment trial, which is expected to start in January.

On the eve of the full House vote, a number of rallies favoring the impeachment were held in New York, Atlanta, Cleveland and some other cities across the country.

However, Americans are about evenly split over whether Trump should be impeached and removed from office, according to a new CNN poll released on Tuesday, showing that support for impeaching Trump stands at 45 percent while opposition stands at 47 percent.

House Democrats have accused Trump of abusing his office by pressuring Ukraine to pursue investigations that could benefit his reelection campaign. The White House has refused to cooperate in the impeachment inquiry, accusing Democrats of an unfair process that aims to overturn the results of the 2016 election.

Trump is widely expected to be acquitted if the articles of impeachment move to a trial in the Senate.