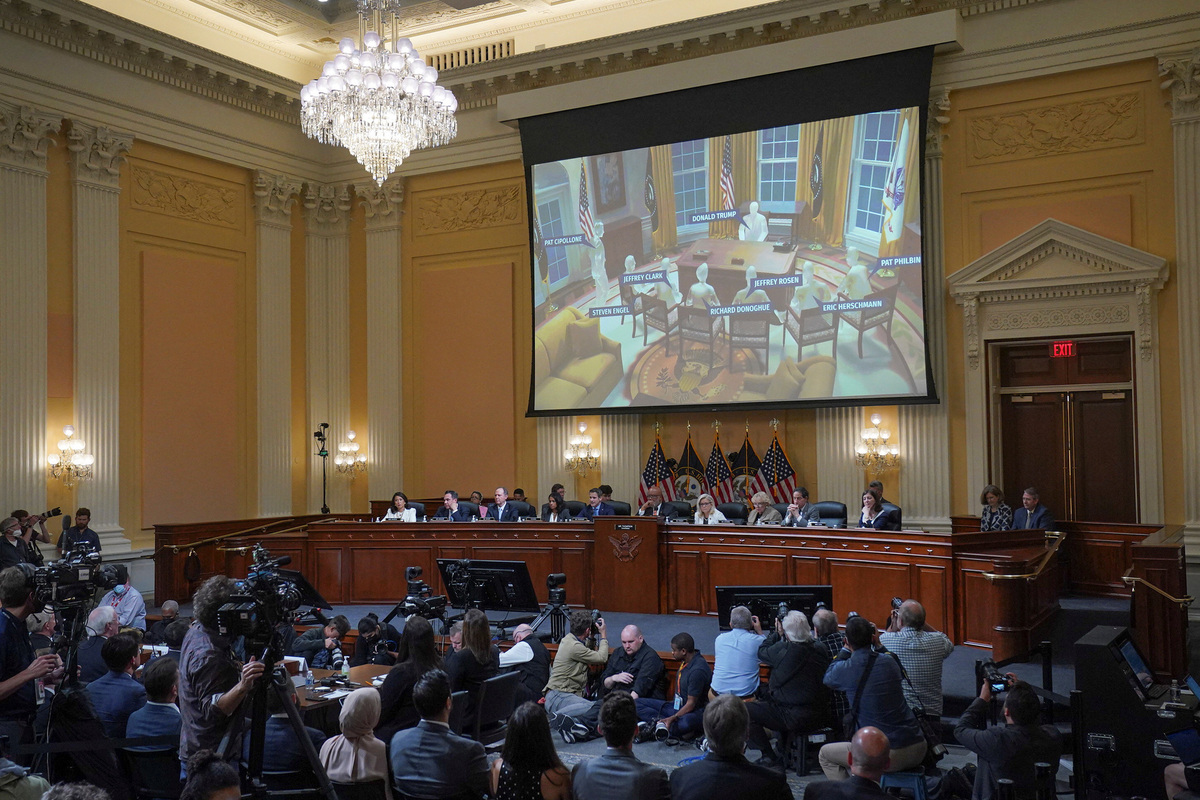 An animated recreation of a meeting between former US President Donald Trump, Pat Cipollone, Steven Engel, Jeffery Clark, Richard Donoghue, Jeffery Rosen, Eric Herschmann and Pat Philbin is shown on a screen, as the US House Select Committee to Investigate the Jan 6 Attack on the United States Capitol, holds the hearing on Capitol Hill in Washington, US, June 23, 2022. (Photo: Agencies)

"The Select Committee's investigation has revealed evidence that Mr. Cipollone repeatedly raised legal and other concerns about" Donald Trump's activities on Jan 6, 2021, and in the days that preceded, according to a statement issued on Wednesday.

"While the Select Committee appreciates Mr. Cipollone's earlier informal engagement with our investigation, the committee needs to hear from him on the record, as other former White House counsels have done in other congressional investigations," the statement read.

Cipollone, 56, served as White House counsel for Trump between December 2018 to January 2021.

He reportedly met with the committee's investigators in April but did not sit for a formal recorded deposition.

The subpoena was issued a day after a former White House aide testified at a high-profile public hearing held by the committee.

Cassidy Hutchinson, an aide to former White House chief of staff Mark Meadows, appeared at the hearing on Tuesday to provide testimony on the Capitol riot.

Hutchinson told the committee that Trump tried to grab the steering wheel of his Secret Service vehicle that day when he was told he could not go to the Capitol with his supporters.

Trump blasted Hutchinson amid her testimony to the Jan 6 committee, claiming that he "hardly" knows who she is.

The Jan 6 committee held a series of public hearings this month to show the public what investigators have uncovered about the infamous incident.

Trump's allies and supporters have charged the inquiry as a political "witch hunt" designed to tar the former US president and the Republican Party.

On Jan 6, 2021, thousands of individuals -- mostly Trump's supporters -- stormed the Capitol in Washington, D.C., and disrupted a joint session of Congress in the process of affirming the 2020 presidential election results.

Approximately 140 police officers were assaulted in the Capitol attack, including about 80 US Capitol Police and 60 from the Metropolitan Police Department.

Authorities have linked at least five deaths to the mayhem. Four officers who responded to the attack reportedly committed suicide within the next several months.

The worst attack on Congress in more than 200 years, the siege led to Trump's second impeachment by the House shortly before his term officially ended.

More than 840 defendants relating to the Capitol riot have been arrested in nearly all 50 states and the District of Columbia, according to the US Department of Justice.

Approximately 185 federal defendants have had their cases adjudicated and received sentences for their criminal activity on Jan 6. Approximately 80 have been sentenced to periods of incarceration.